This post is about soup. Butternut squash soup to be exact. It's also a little bit to do with the fact that Pinterest doesn't always mean awesomeness. And by that I mean, occasionally doing a project or making a recipe found on Pinterest doesn't always leave you grinning from ear to ear or devouring an entire recipe in one sitting. Let me tell you about this soup.

I found this recipe on Pinterest and it looked simple and tasty. Plus, I had a butternut squash sitting on my counter that I have had for weeks months. So Saturday afternoon I decided to finally use up that squash and make this yummy soup for supper. First, I chopped up my squash. 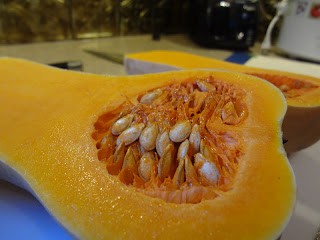 Once the squash was nicely cubed, I moved on to the other veggies. I put them all in bowls so that when the time came, I could just dump it all into my pot and not have to worry about if something was chopped yet or where it was. Plus, my bowls are really pretty and they made picture taking more fun. 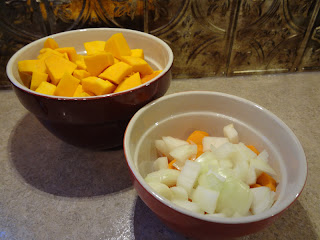 Once all my veggies were prepped, I heated up the oil and sage. Once that was nicely heated, I dumped in my veggies and fried those for 8 minutes or so. 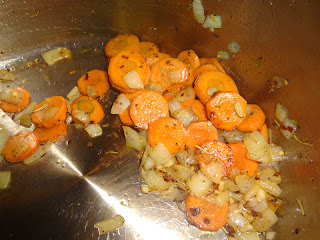 Once those veggies were nicely cooked, I addeed my chicken broth and squash. I let this cook for almost an hour. This might have been mistake number one. I think I simmered away too much liquid which affected the thickness of the soup at the end. But I was busy making biscuits (more on that soon) and couldn't get back to the stove on time. Oops! 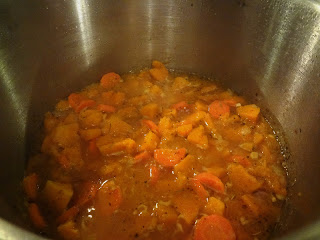 The above picture doesn't make it look very appetizing. I blame it on the bad lighting above my stove. But once it was all cooked and looking slightly like above, I buzzed it up with a hand held mixer. Love that thing. If you don't have one, you should get one. 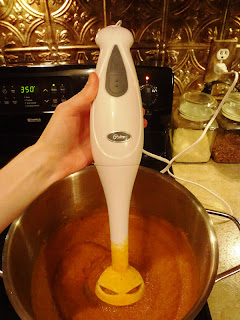 Once it was all buzzed and ready to taste, I grabbed a spoon, filled it up, and took a bite. It burned my throat on the way down, which I thought was strange. Butternut squash soup is supposed to be mellow right? I gave Dan a bite too, just for a second opinion. He swallowed, made a face, and said, "Kinda hot, eh?". Mistake number 2! I followed the recipe and put the 1 tsp of red pepper flakes in. But I'm thinking that since she then added cream, it probably  neutralized some of the spice coming from the flakes. Since I'm off dairy, I followed her suggestion of putting more broth in place of the cream. But now we have spicy butternut squash soup!

It's not horrible but it's definitely not our favourite. I fortunately made up a batch of baking powder biscuits to go with them so we dipped them in the soup to help spread out the flavour.

Mix together dries and then cut in margarine. Add milk (about 1/2 c.) until doughy consistency. Gently roll onto floured surface and cut into shapes. Bake 10-15 minutes at 400 degrees Farenheit.


Overall it wasn't our favourite soup. And I probably won't be trying this recipe again. But it was okay and we ate it. We're still working our way through the leftovers though. Anyone else find a recipe on Pinterest that you think will be awesome but it doesn't turn out that way?
Posted by Jenn0021 at Tuesday, November 20, 2012