I'm trying to let my inner creativity out and decided to do some minor fall decorating. Believe me that when I say minor, I really mean it. Basically I did one thing. But I'm really pleased with that one thing I did! Earlier this week I arrived home from work and then spent the next 15 minutes wandering around in the light drizzle finding random bits of nature to grace my table with. I used items from my yard as well as some neighbours yards. Don't worry, I only stole from the cottagers who aren't there. Plus, I didn't destroy entire bushes or anything so it isn't a big deal.

Everything was really wet since it has been raining for nearly a week now so I let them sit on the counter for a little bit while I cleaned up other parts of my kitchen. I probably could have let everything dry a little longer but I got impatient. I chose a small pottery vase that my brother made me and got to work. I'm really pleased with the finished product.

I bought these two adorable pumpkins at the Farmer's Market last week. I couldn't resist them, even if they did cost me $1.00. And they fit in with my fall display so nicely! 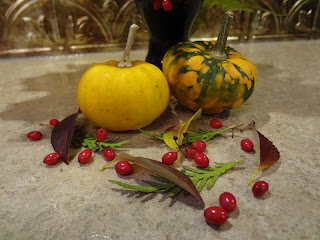 I have moved this display to my dining room table and it's giving me so much joy. Everytime I walk by it I smile a little bit.

Our next fall related activity was pumpkin carving! Growing up I never carved a pumpkin. The first time I did was with Dan when I was 18 and we have done it almost every year since. I have decided that this is our new family tradition and we will carve pumpkins every Halloween until we die. Or at least for a long while yet. At the Farmer's Market last week, I chose a nice big round pumpkin with the perfect stem handle and brought it home. It was dirty and we were still a few days out from carving so we put it on our front porch. Big mistake. For some reason I forget we have a dog and that she is pretty sure all things belong to her and must be there for chewing on. This what the handle looked like when she was done with it. 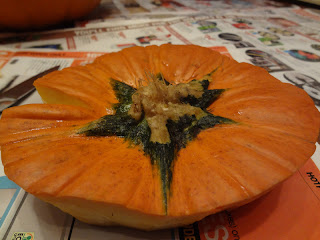 It was sad. But we forgave her and still made an adorable pumpkin. We set ourselves up at the table and had candy on hand for snacking. Which we snacked on a little too much and both felt sick afterwards. Oh well, that's Halloween for you.

Once we were set up and ready to go, Dan took over the drawing of the face. I'm really not all that talented when it comes to copying things from paper to pumpkin. Yes, I said copy. We looked up faces on Google and printed out one we liked. We do it every year. :P

Once Dan finished that part, I set to work scooping out the insides and separating the seeds from all the other gunk. Last year Mia ate all the seeds after they were baked and cooling on the counter, so this year we were a little more vigilant. Don't worry, she didn't get near them.

Dan then took over again to do the cutting. I started it but I think he was concerned I would slice my finger off. Plus, I chose a pretty big pumpkin so the skin was pretty thick and I'm pretty weak. He did a fabulous job!


And this is our finished product! I LOVE him. Even though we don't have any kids in our neighbourhood, we put him out on the front porch. It just felt right to do so. Such a little cutie.