Hang That Coat Up!

I want to start this post off by saying I love my house. I really really do. It's perfect for us and I love living in it.

One of my complaints though is that it isn't overly well set up for winter. Like there isn't really an entryway/mudroom. In the summer, we just kick our shoes off at the back door and continue on our merry way. But in the winter, there are boots, coats, hats, scarves, etc, etc. We do have a hall closet by the front door that we store all our coats and winter accessories in but it's not convenient to go to the closet every time you want your coat. Maybe I'm just too lazy but my coat usually ends up on the back of a chair or the couch. And I'm way too lazy to use the front door.

So this winter I decided we needed to do something about this dilemma. Thanks to Pinterest I found an awesome idea to turn an old pallet into a wall hanging coat rack. I decided it was totally doable and would be relatively cheap. Of course I needed some help from Dan getting the pallet to the stage where I come in. So he tore apart boards and pulled out nails and rearranged it all into a nice starting point.


The next step was to sand it down. I started out with a little piece of sandpaper to get in the cracks and small grooves. It was a little time consuming though. 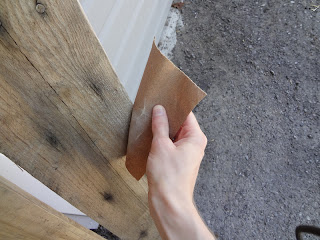 So I was excited to move on to the palm sander! Even if it vibrates my entire body and makes me feel slightly nauseated. 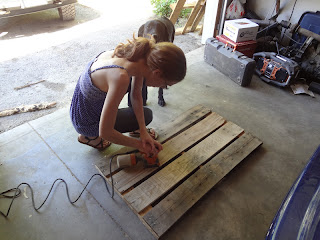 Once I finished sanding it all I took a break for the day. That was enough work for me. :P

Day two brought me to painting the pallet. I just used some left over black paint that we had on hand so as to save money. I'm pretty sure we never even bought the paint in the first place, as it was left behind by the previous owners. Score!

Now I have a confession to make. All these above photos were taken back in September. I was all motivated to start this project but then we met a slight hiccup. The dining room wall where it was to be mounted needed some work (more on that later). So this pretty little pallet sat in the garage for 2 months and then in my house for 2 weeks. We finally mounted it this past weekend. Which was another whole experience in itself.


Mounting the pallet was pretty easy and straightforward. Well, especially for me since Dan did all the work! The frustrating part came when we went to put the hooks on it. We bought eight of these hooks from home depot for about $3.98 each.

We eventually gave up on the idea of using the matching screws and used some Dan had on hand. They didn't fit quite as nicely but hey, at least the hooks will hold our coats!

Once we changed to the better screws, the process sped up and we were done before you know it. I'm really pleased with how it turned out.

And it works wonderfully for hanging all my stuff on. It's so nice to be able to step in the door and hang up all my things right there. 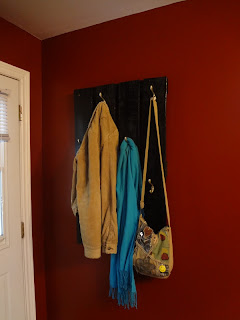