Yesterday I went to my very first book signing ever! And I had so much fun! Oh and I should warn you now, there will probably be a lot of exclamation  marks in this post. There, you've been warned.

It was kind of a last minute decision to go to the book signing seeing as it was in Toronto which is about 1 1/2 to 2 hours away from us. I originally thought I had to work and there was no way I was going to leave here at 4:30pm and get to the signing for 6:00pm and then wait in line for 3 hours just to get my book signed. I'm not that hardcore. But once I discovered I had the day off, I thought to myself thought I "why not?". So I convinced Dan to take me and we left town by 1:00pm. We wanted to be sure to get there plenty early enough.

Now to the great reveal of what book we went to get signed! Are you ready for it? 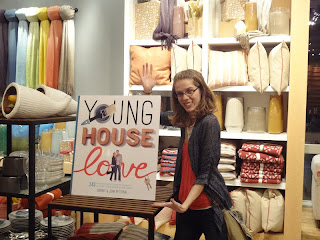 For the last year or so I have been following the blog Young House Love and absolutely adore it. You should totally check it out. They recently wrote a book and are in the middle of their book tour right now. Toronto was their only Canadian stop and I went to it! Lucky lucky me.

Back to the beginning though, before I get too ahead of myself. We wanted to get there early since the Facebook event page said there was approximately 500+ people expected to show up. I didn't want to be at the end of the line standing outside or anything. So we go to the West Elm at around 3:15pm. Only to discover a store that looked entirely unprepared to host such a huge gathering in a few short hours. After talking to an employee and making sure we were at least in the right location, we wandered around the store and found some fun items to take pictures with.


Now I don't know if you've ever been to a West Elm but there's a limit to how many times you can walk around the store pretending you're interested. Our limit was three. Especially since we're way too cheap to actually buy anything there. $32 for a tray? No thank you. Eventually we decided we had perused enough and it was time to wait. The staff told us that they would be starting a line at 5:30pm (which is ridiculous) so we found a spot that was out of the way of customers but close the actual signing location. And we started our long wait. 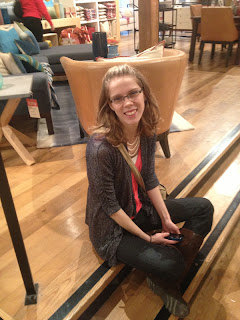 Once we were obviously there for the book signing and not just to shop, other Young House Love fans found us and joined our unofficial line. Once the staff of West Elm realized that the crazy fans wouldn't be stopped from starting their own line, they started the "official" one at 4:30pm. And we were third! Which was awesome because then we got to leave earlier. But I'm jumping ahead of myself here.

The other awesome thing about waiting in line for so long is that you talk to the people around you and make new friends! Our line buddies were Sarah and Casey who were with us right from the get go. They were awesome. And they definitely made the whole experience way better. If we had grouchy line buddies it would have sucked. 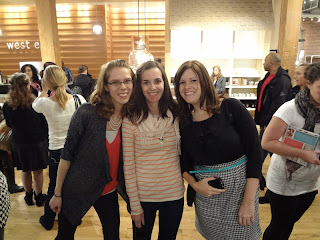 After waiting for what felt like forever, John and Sherry finally came out at 6:15 to get the signing started. It was so cool to see them in real life! 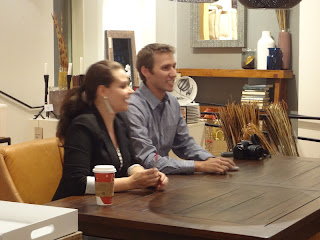 I'm so glad that we were near the front of the line. I don't think I would have been able to wait for hours knowing they were there and talking to other people. I was like a kid on Christmas morning. :D

My turn finally came and I awkwardly went up and said hi. I got all nervous and didn't know what to say so I just got them to sign my book and posed for a picture with them. But here is proof that I met them! 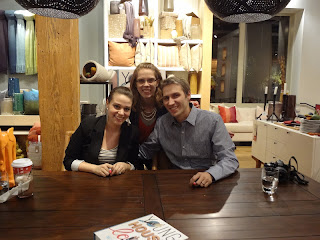 We were out of there by 6:30pm and home by 8:00pm. Just in time for a late supper and to head to bed. Good thing we got there so early so that we could leave so early.

So there you go. My fun book signing adventure comes to a close. It was fun and exciting and definitely an awesome experience all around. And now I have a super amazing book that is signed by John and Sherry! I've already started finding new projects that I can start. Dan is super excited. :P