There is a section of the wall in our basement that remained bare for too long. It has three sunken in areas where you can hang pictures and they have lights over them. It had the potential to be beautiful but I just didn't know what to do with it. The previous owners had black and white pictures of their baby and their wedding. It looked stunning. As you are all aware, we don't have a baby to flaunt and I thought it would be awkward to have three pictures of us there. We're not that vain. So it remained empty and blank for six months. Yup, six whole months of nothingness. People would come and ask what my plans were for that wall and I would just shrug and say "I don't know". Because I honestly didn't.

Finally, last Christmas I hung up one frame. It is a painting of three butterflies that my sister-in-law painted for me. It is beautiful and has a special meaning for me. Once I had that frame up, I went out and purchased two more frames that matched that one and hung them up. Just to make sure it all looked good and they blended well together. So those two extra frames hung on the wall for another six months with the generic happy mother and son picture that came with them. I know, how horribly tacky. After multiple comments from people on the lame empty frames, I finally chose which pictures to put in them. On one side there is Dan, myself and Mia which is our family photo from Thanksgiving 2011. On the other side is a picture of Mia by herself. We don't have kids, we just have an awesome dog.

Once all the frames had pictures, I was quite pleased with how the wall looked.  But it was still missing something. It needed something hanging in between all these frames on the wall. I searched and searched for some nice candle sconces but I couldn't find anything I liked. Until one day when I was perusing Value Village, I came across these ugly things. 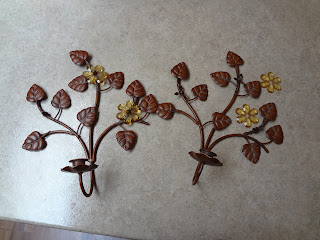 They weren't horrible but I was not a fan of the colour or the ugly yellowish flowers. But I figured they had potential. And for $3.99 each, I figured it was worth a shot to try and salvage them!

I removed the ugly flowers first, they just couldn't be saved. At least not for this project. Then I Dan spray painted them black. I love how they turned out! Very elegant looking. 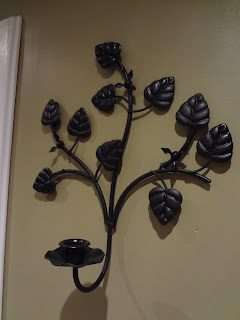 Once they were painted and on the wall, they stayed like this for another couple months. I didn't have any long candles on hand and I just kept forgetting to buy any. Are you shocked that it took so long to finish this project? I think it's starting to become a trend with  me.

Finally last weekend when we were in Ottawa, I picked up a box of white tall candles from Ikea. I finally finished this wall 17 months after we moved in! 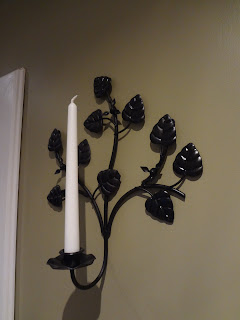 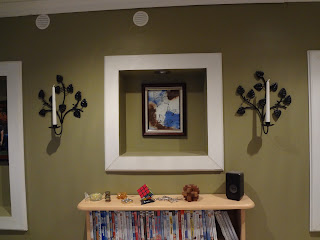 And here is a shot from before the candles went in to give you an idea of what the full wall looks like. Each frame has a light above them but I forgot to turn them before snapping this shot. So you can't really see the pictures all that well. Oops! 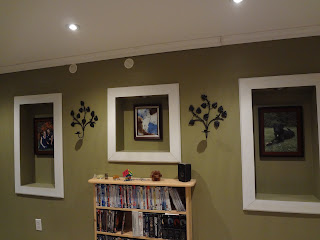