I have many childhood memories of helping my Dad make pancakes. It was our thing. I would pull up a kitchen chair, grab my mini flipper and make pancakes with my Daddy. We would pull out those two electric frying pans, position them side by side on a giant wooden cutting board over the kitchen sink and whip up my Dad's famous pancakes.

When I moved out, I carefully copied the recipe onto a recipe card of my own and was determined to keep up the tradition of making these awesome pancakes. And so I have. Although they don't taste quite as good as they did back then when I made them in the most awesome pancake team ever.

We never eat pancakes for breakfast. That's just not how it's done for some reason. Pancakes are a supper thing, served with yogurt, berries and maple syrup. Maybe we're weird but oh well, that's how we roll.

Now onto the reason for this post. Ever since I went gluten-free, we haven't had any pancakes. I just hadn't bothered to find a recipe for them that I could eat and I know they're not the healthiest supper option, so I just didn't make any. But over the past few weeks, I got a craving for some pancakes. Pancakes and maple syrup to be exact.

So after some searching online and through my GF recipe books, I decided to try this recipe for Whole-Grain Gluten-Free Pancakes from the blog Gluten-Free Girl & The Chef. 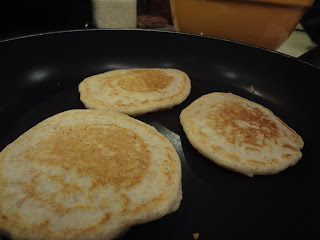 We doubled the recipe since it said it only made 8 pancakes but I don't know how big they make theirs. Both Dan and I had our fill of pancakes and there was enough leftover for another whole meal for us. So in the future, I might just make a single batch. I did freeze the remaining pancakes though which worked out great. It's nice and easy to just pull out some pancakes and throw them in the mircrowave.

My only complaint was that they were salty. I'm not sure if it's the recipe's fault or our fault or what but they were SALTY! Even after we loaded them up with blueberries and maple syrup you could still really taste it. 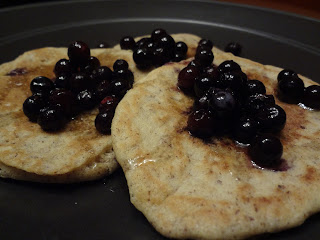 So I do plan on trying them again but putting less salt. Other than the salt issue, they were pretty good. Not as good as my Dad's of course but still good. And it hit the spot and satisfied the craving. Plus, it gave me an excuse to drench them in maple syrup. Delicious!
Posted by Jenn0021 at Tuesday, January 29, 2013