That's right, knitting can be cool. It's becoming more and more popular among the younger generation and I am proud to say that I knit. I started many many years ago (I think I was 10 or something) but never really seriously knit until more recently. I actually have almost five finished projects but I'm only going to share three with you today. Mostly because I don't have pictures of the other ones yet. I need to get on that.

Back in 2005 (or maybe it was 2004) I decided to start knitting a blanket for my sister Stacey's next baby. She had just had her first and my other sister Cora had knit a cute little yellow blanket for him. I thought that it would be so smart to start early so that when she had another kid, the blanket would be ready for him/her. Awesome idea right? Well it would have been if I had actually finished the blanket back in 2005 or even 2006. In May 2006 Stacey had a little girl. The blanket wasn't finished. Oh well, I had time. I could give it to her for her first birthday. Well that didn't happen either...  Fast forward 6 years and I finally finished the blanket! I'm slightly embarrassed that it took me so long but oh well, it's finished now. Maybe she can use it for her dolls. 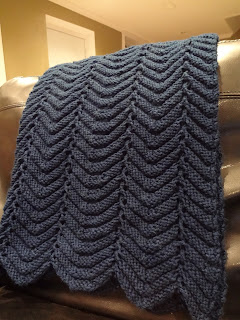 This pattern was one that my Nanny used for all of her blankets. Most of our afghan's at home are with this pattern. It was the first one I learned how to do. 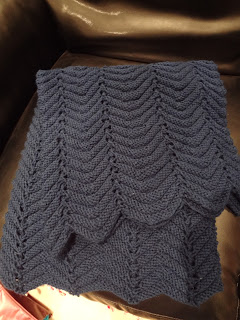 It was also the first one I forgot. I had to email a bunch of people to finally find out what the name of the pattern was so that I could Google it and be able to finish this blanket. 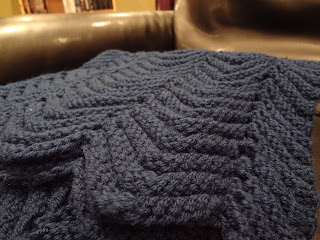 I've been trying out new patterns when it comes to baby blankets and this next one I made for my new niece. And unlike the last one, I'm giving it to her when she's only a month old. Win! 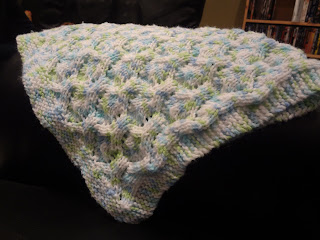 I love the pattern, it's so delicate. I'm really pleased with how it turned out. 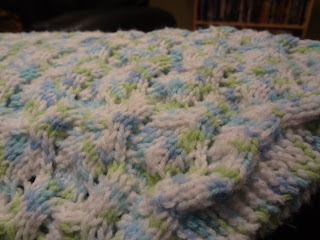 The only problem with it is that it's tiny. I used the wrong size needles and smaller yarn so it came out smaller than it was supposed to. Maybe it will be used more like a blankie or to go in the car seat. Who knows. But it was made with love! 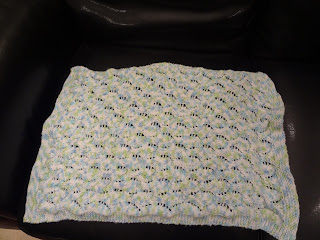 The last project I'm sharing today is one that I made myself. I thought it was time to do some selfish knitting. I attempted my very first cowl. And for those who don't know what a cowl is, it's basically a scarf that is attached so it's a big loop. You just wrap it around your neck and voila! 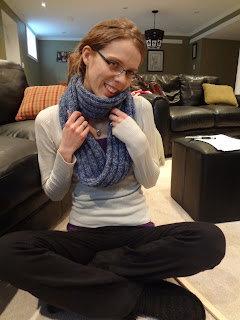 I'm really pleased with how it turned out and I love the colour I chose. I wasn't sure at first but I'm totally in love with it now. 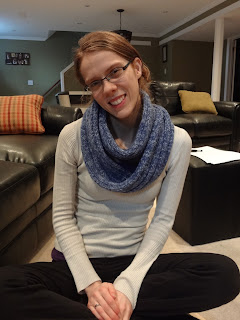 See, it's just a big loop. Very simple and easy to do. I did most of my knitting on this project sitting in front of the tv. 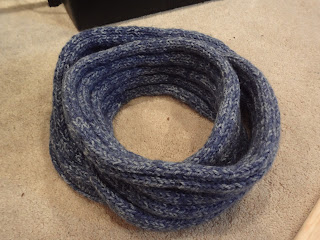 Stay tuned for another post on my next few projects.
Posted by Jenn0021 at Wednesday, January 02, 2013