For the Love of Good Food - New Recipe #3

I love food. I love it SO much! And I think that my appreciation of food has grown these last couple months even more. First of all, because I have had to experiment with different recipes and ingredients trying to adjust to a gluten-free diet. And secondly, because after a year and a half of feeling nauseated and not at all like eating, it's nice to want to now. So all this to say, I love food.

I try a lot of new recipes and sometimes you come across one that is absolutely amazing and you want to eat the entire pan of it if you could. Well, that was me last week when I tried this recipe for Cabbage Sausage Supper. Now normally, I probably wouldn't have even given it a second glance. But since I still had half a head of cabbage in my fridge that needed using, I was drawn to it immediately after my sister pinned it on Pinterest. And the fact that she had tried it and said that it was a success was even more convincing. I needed to make this recipe.

So I picked up a couple gluten-free sausages from a local butcher and attempted this easy looking recipe. 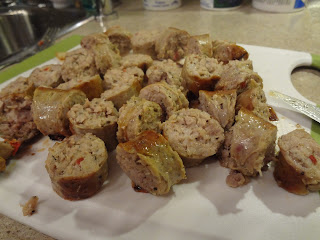 I'm really proud of myself for finding another use for the leftover cabbage instead of letting it go bad and then having to toss it. That is what I would normally do but since I've been trying really hard not to waste food, I found another use. Go me! 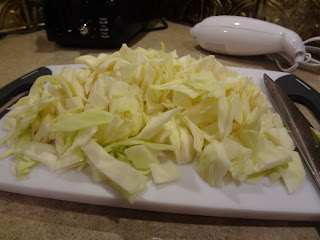 One of the awesome things about this recipe is that it's so simple. There are only a few ingredients and really not much prep time is needed. After the cabbage was chopped, I moved on to the carrots and potatoes. 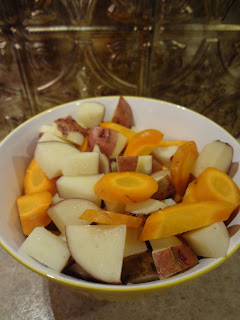 It was at this point that I left the kitchen to go do my dance workout video and had Dan finish up the rest. He was pretty proud of himself with how the recipe turned out and even tried convincing me it was him who made supper. We finally agreed that it was a joint effort.

Now we did add in some spices even though the recipe didn't call for them. My sister advised us that she had added spices so we followed suit. We put in salt, pepper, garlic salt, paprika and a bay leaf. And as you can see, it turned out great! 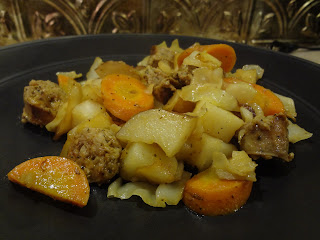 Oh my goodness it was amazing! The flavours came together so well and everything was cooked to perfection. The cabbage was an awesome filler but didn't overtake the recipe. Even Dan said it was delicious and we should totally make it again. Which is impressive since he doesn't even like cabbage. So you should totally all give this recipe a shot! And if you do, come back and tell me how it turned out.