When I first went gluten-free, I assumed that I would just have to give up all forms of baking because no matter how hard I tried, there was no way I'd be able to make anything as good as gluten filled baking. Boy was I wrong! I've made some awesome stuff over the past 3 months.

Now before I get all carried away, I will say that I've also had my fair share of baking flops. Nothing that I couldn't eat, but definitely less tasty than expected. I think an important part of gluten-free baking is to keep persevering. You probably won't be wildly successful your first attempt. Heck, even at your 12th attempt you may still suck. But as long as you're having fun and are enjoying your creations, keep at it!

This past weekend I spent some time in the kitchen baking. I made pumpkin muffins, pumpkin bars and peanut butter chocolate chip blondies. 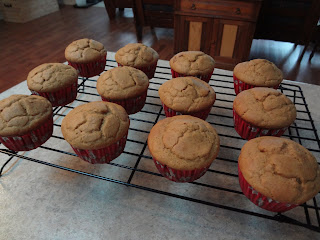 Let's start with the muffins. I made these Pumpkin Muffins that I found on Pinterest and this is actually the third time I've made them. The first time I added chocolate chips (yum) but I've since eliminated them to make them a little healthier. I also put less sugar since I found the first batch to be way too sweet. But, I am proud to say that third time was the charm in regards to appearance. They actually look like muffins! The first time, they barely rose. The second time, they fell. But this time, perfection. 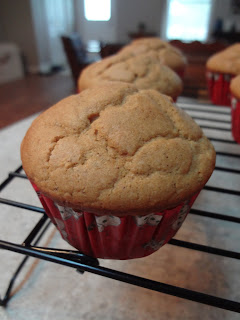 Oh, and I also used mostly coconut sugar this time as a trial. They're still tasty and not at all coconut flavoured. So overall, these muffins were a success.

Next up, Grain-Free Pumpkin Bars. Once again, I found the recipe on Pinterest and since I have an overwhelming supply of pumpkin (thanks to our cute little Jack-O-Lantern), I was immediately drawn to it. Plus, it looked extremely simple. 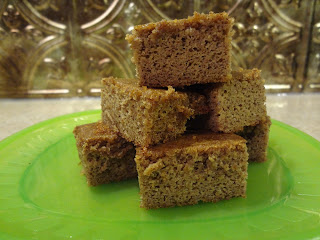 While they turned out really well and have a perfect consistency, I'm not 100% in love with the flavour. But that is completely a personal thing, so don't let that stop you from trying them yourself.

Last but not least, I made some awesome Peanut Butter Chocolate Chip Blondies. The name alone just makes you drool a little bit, doesn't it? Peanut butter and chocolate together, yes please! This recipe is from the same blog as the Pumpkin Bars and I love the simplicity of them both. I've been happily browsing through this blog, The Detoxinista, for a while now and plan on trying many of her recipes. 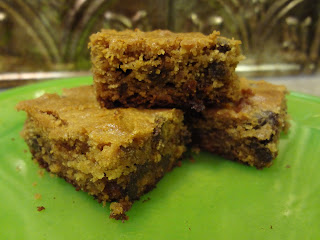 These are good! They're moist and chewy and just plain delicious. My only complaint with the bars I made was that the edges got a little too cooked. But that is entirely my fault since I had too many pans in the oven at once. But other than the darker edges, these blondies are pretty near perfect. You should totally give them a try.

All in all, I had a successful Sunday in the kitchen and am pleased with the end results. I love having some yummy treats in the freezer ready to eat whenever I need them. So what do you think? Do any of these recipes look good enough to try? Even if you're not gluten-free, do you ever bake gluten-free goodies? Any recipes you want to share?
Posted by Jenn0021 at Wednesday, March 27, 2013