Back on Monday when I posted about Birthday Week, I mentioned that I would write another post on our weekend away and why I was in a nice King size bed for my birthday. Well here is that post I promised you!

Since getting sick back in the summer of 2011, Dan and I really haven't done much in regards to dates or vacations or anything really. It's hard to travel or even leave the house when you feel like crap so we basically just stayed home for almost two years.

But since I've been feeling better these last few months, I decided that it was high time we did something fun and why not do it on my birthday weekend? So we planned an overnight trip to Toronto where we would stay at a nice hotel and then visit the CN Tower.

After running some errands on Saturday, we headed to Toronto later that afternoon and met up with a friend for supper. 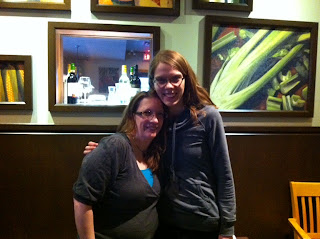 We had a blast with her and her husband and chatted for over 2 hours before heading off to find our hotel.

We had reservations at the One King West Hotel which was located in downtown Toronto and we hoped to arrive before it got too dark. No such luck there, it was dark when we arrived and we got lost in a maze of one-way streets while trying to find the entrance to our hotel. It turns out that it's a historical building so they can't put up much signage.

We finally found the entrance to the hotel and were told we could park our car a block away in a public parking garage. Once parked, we took the elevators up to civilization only to find ourselves once again lost in a deserted shopping mall with no idea how to get out. After a couple minutes of wandering around and doing some backtracking, we escaped into the night air and were pleased to find out that the door we exited was right across the road from our hotel.

We checked in and headed up to our room. We were a little disappointed that there were two small beds instead of one bigger one but since we reserved our room through a deal website, we weren't complaining. 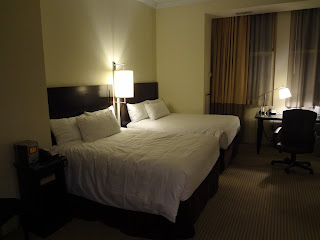 I was even thrilled to discover they had a small kitchenette area, complete with a mini dishwasher, washing machine and dryer! Not that we needed to use any of these amenities, it was just fun to see that they had them. 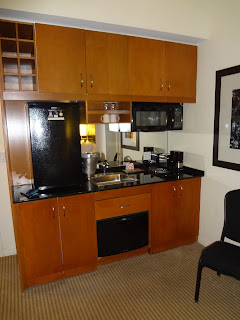 As I happily started to unpack and get settled in, Dan headed to the bathroom. Only to return by saying there was garbage in the garbage bin as well as on the floor. Which got us thinking that if that had been missed during the room cleaning, what else had been? We decided that since we were paying a decent amount to stay in a nice hotel, we wanted a clean room. So we packed up and headed back downstairs.

The front desk was very kind and apologetic and offered us a room upgrade to a suite with a King size bed, as well as a complimentary in-room movie. We thanked them and headed back towards the elevators.

But before we could make it into the elevators, the fire alarm went off. All guests were told to remain in their suites until the situation could be investigated by the fire department. But we hadn't made it to our suite yet! We opted to take the stairs since our room was on the 5th floor and we made our way to our room. Once there, we waited with bags packed and shoes on just in case we would need to evacuate.

This room was much nicer though and the bed looked awesome. 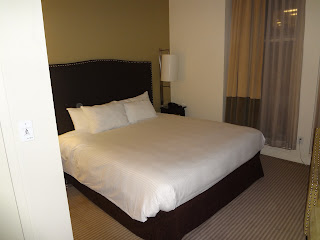 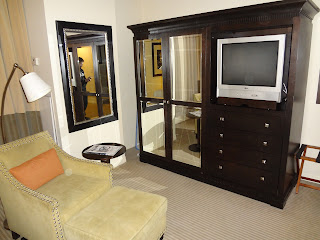 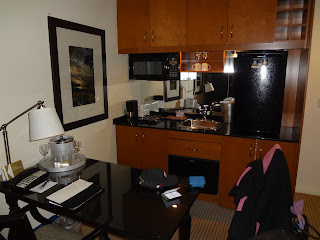 Finally, the alarm stopped and the announcement told us the threat of fire was over. We then unpacked a little and settled into bed to watch our complimentary movie.

Except we couldn't find the remote. We looked everywhere and finally had to call guest services for a new one. Which took 20 minutes to be delivered. But once it came, the rest of the evening was nice and relaxing with no more glitches.

The next morning, Dan brought me my last gift (the cast iron casserole dish) and breakfast in bed. 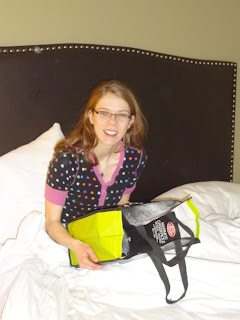 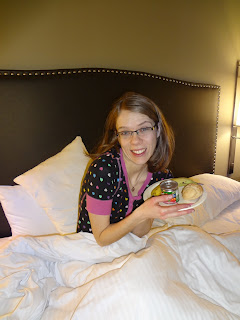 Once breakfast was eaten and presents were opened, we chilled in bed for a bit before showering and checking out. Then we headed out for our walk to the CN tower! 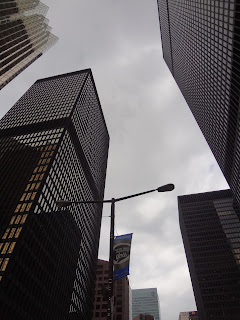 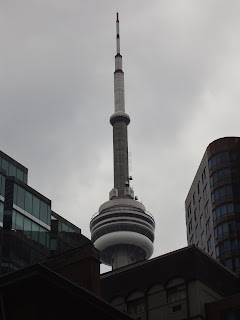 Us country folk don't get into the big city that often so it was pretty cool to walk around with all the huge buildings and crazy busy streets. So different from what we're used to.

Before heading up the CN tower, we stopped to get Dan some lunch since he had missed breakfast. We picked up a sausage from a small hot dog stand and I drooled over it while Dan devoured it. It smelled so good! Oh how I'm going to miss hotdogs/sausages this summer. 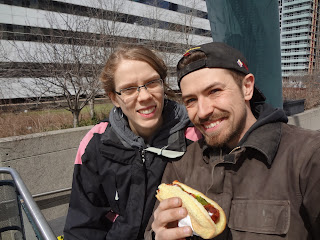 Once Dan's tummy was full, we headed to the CN tower! 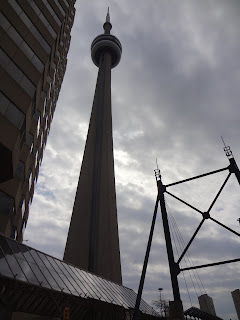 Except we didn't go up it. We had every intention to but when we got to the ticket counter we were informed that the outside observation deck was closed. And since tickets are $35 each, we opted to not spend $70 for an incomplete CN tower experience. We'll make a day trip later this summer and do it properly.

At this point, I was feeling slightly disappointed that my wonderful planned weekend wasn't going according to plan at all. We wandered around aimlessly for a bit and then decided to go back to our car and drive along Lakeshore Blvd (along Lake Ontario) and then hit up a vegan gluten-free bakery for some birthday treats. 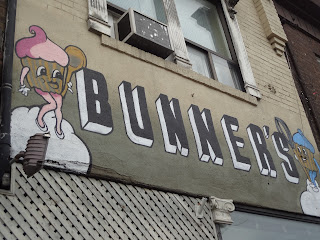 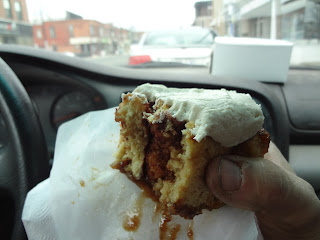 Dan bought himself a cinnamon bun and I got a chocolate cupcake to eat later. After our treats, we headed home.

Once home, we worked on the hen house (different than the chicken coop, more on that later) for a bit and then went and got burgers for supper. There is an awesome restaurant called The Works that has gluten-free buns. I love me a good burger! 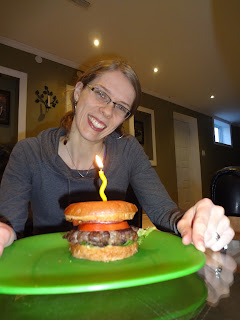 And you can't forget the cupcake! 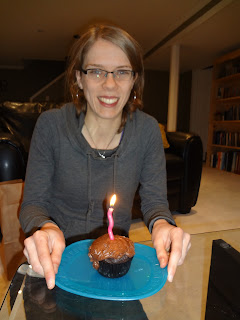 The cupcake actually ended up being pretty gross and I only ate half of it. Oh well. We then curled up and watched Runaway Bride before heading to bed.