Sorry for the boring post title, I'm just not feeling creative this morning. Plus, I didn't want to confuse anyone since it is Monday morning and I'm assuming I'm not the only brain dead one out there.

Can you guess what this post is going to be about???

If you guessed blueberries and rhubarb, you're right!

I've been wanting to plant blueberries for a while now, but was feeling a little nervous about it ever since Googling how to plant them. Supposedly, blueberries aren't the easiest thing to grow, especially if your soil isn't just right. So I was thrilled when I came across a fabulous local blueberry farm, Wilson's Fresh Blueberries, who sells "blueberry packages". Thank you Vicky for the heads up.

We talked to them at a local garden show and then emailed back and forth before finally deciding on three different types of blueberries in three separate planters. 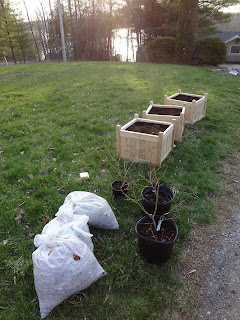 We chose three different blueberry varieties, Duke, Bluecrop and Jersey, so that we will have a longer blueberry season. They all ripen at different times so we can enjoy fresh blueberries for longer than two weeks. Cool eh? I can't wait.

Planting them in the cedar planters avoids any bad soil issues and we've been told that once they are planted in these planters, they're good for 30 years. The only thing we'll have to do is water and fertilize them. Seems pretty simple to me.

We lined the three planters up on our front lawn alongside the driveway. The ground was a little uneven though so we had to help level it off. Dan got out his big green orange tractor and brought in a small load of dirt. 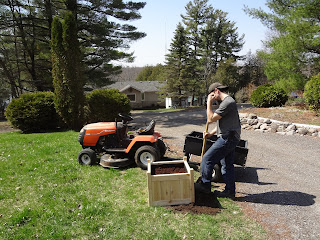 Once all the planters were nice and even, we planted our blueberry bushes! 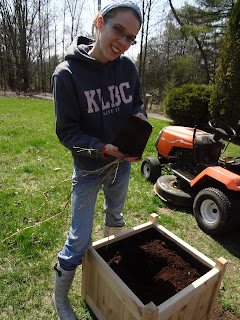 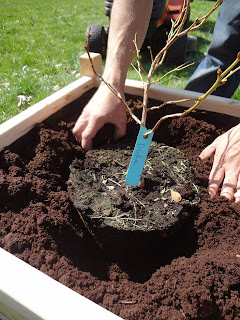 Then we covered the blueberries with mulch, to help keep the peat moss nice and moist. 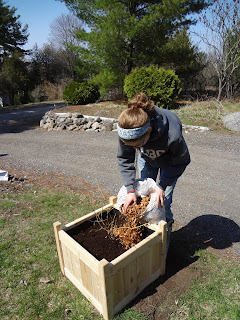 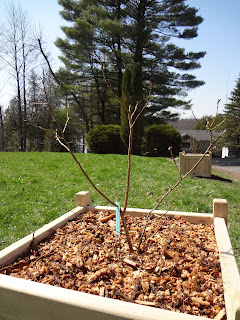 See the happy little buds that are starting? 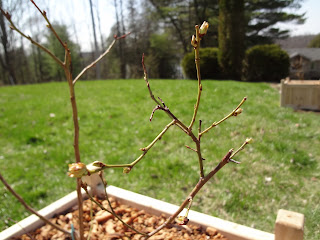 That means we'll get some blueberries this summer! 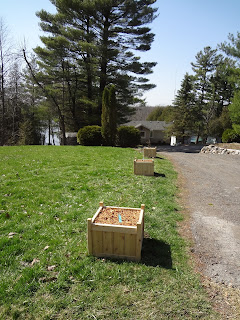 I think they look really good along the driveway like that and once they get a little bigger and actually have leaves on them, I think they'll look even better. 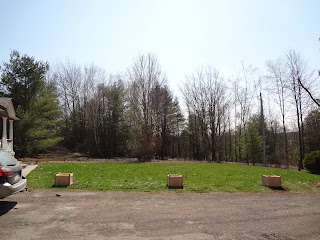 I also like that we're bringing some more stuff to our front yard, it was feeling a little neglected. Plus, it leaves us more wiggle room in the back for more projects!

We also planted rhubarb this weekend. Although unlike the blueberries, it was free. A friend of ours has a whole bunch of rhubarb growing in her backyard and she offered some to us, if we wanted to come dig it up. Which of course we did. 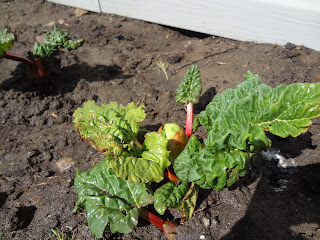 We planted it alongside our garage where it gets plenty of sun. The only downfall to this location is that its protected by the overhang so we're going to have to water it faithfullly. 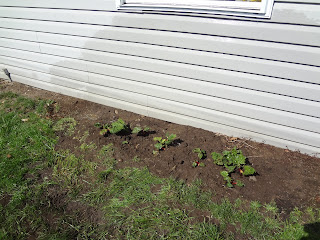 It looks so small in that above picture. But pretty soon it will be growing and producing yummy rhubarb for us! Although we were told not to pick any of it the first year, in order to give it time to really root. So next summer we'll be enjoying the rhubarb.

That is just part of what we accomplished this past weekend, as we worked some more on our hen house and chicken coop, but that's all the updates you'll be getting for today. What do you think? Do you like our pretty blueberry planters? Do you grow any blueberries or rhubarb? Any tips or comments?
Posted by Jenn0021 at Monday, April 29, 2013