I've been trying to get into quinoa more. I keep reading about how fabulous it is and that it's the super food of all superfoods, how healthy it is for you and that gluten-free people adore it. But to be honest, I've been struggling with it.

I think that my first mistake was buying the black quinoa and making it as a main side for our first test run of it. It's not like rice and if you aren't familiar with the taste, you probably won't enjoy it. That was us about a year ago. We tried it and didn't like it.

Fast forward many months and I decided it was time to give it another try. While flipping through my Simply Gluten Free magazine that my amazing friend Tory sent to me, I came across an ad for a blog called Queen of Quinoa. It is an awesome blog and you HAVE to check it out. Seriously. Even if you're not gluten-free, she has some amazing recipes on there that are worth your time. For example, the one I'm about to share.

Since our first experience with quinoa wasn't that good, I thought that mixing it into a recipe would be a good way to introduce it to ourselves and our taste buds. I also purchased some of the more familiar golden quinoa instead of the stronger flavoured black quinoa.

The perfect introductory recipe just fell into my lap. Or more like I found it while obsessively searching the above mentioned blog. Rosemary Quinoa Meatballs. Don't those just sound amazing?

They were super easy to make and totally worth the small amount of effort I put into them. I did tweak the recipe slightly by using beef instead of turkey (it's what I had on hand) and serving it over rice pasta instead of spaghetti squash. It's all about using what you have in the fridge/freezer, right? 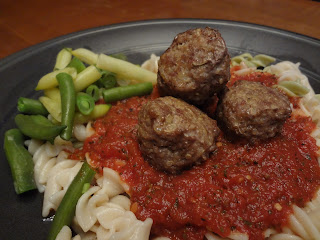 And I made a tiny little mistake during assembly. The recipe called for 3/4 cups of cooked quinoa. Which I totally understood and thought I did. Except for I had the 1/2 c. measure in my hand instead of the 1/4 c. measure like I thought. So I may have accidentally doubled the amount of quinoa called for. But the good news, they still turned out great! 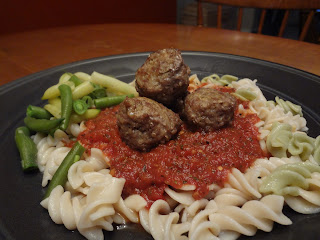 I totally plan on making these again but putting the right amount of quinoa. I think they would make them a little less crumbly.

The other awesome thing about these meatballs is that they are so versatile! We had them with pasta and sauce the first night and then I had them with potatoes and veggies for leftovers. And with the last remaining two meatballs, I just heated them up and ate them with ketchup. All good!

This is my new go to meatball recipe and I think you should give them a try. Seriously. You know you want to.