Mmm.... pizza. I haven't had a slice of real pizza in over a year. Can you believe it? A whole year without a slice of warm cheesy goodness. Honestly though, I don't really miss it. I mean, I miss it a little but it's not like I cry each day over not being able to have it.

I kept secretly hoping that I would eventually be able to go back on dairy and be able to have some pizza, but alas, that never happened. So I had to take matters into my own hands. Or as Dan affectionately called it, biscuit with sausage and veggies.

I was given a pizza crust mix from a friend and it sat in my cupboard for a few months (while I was hoping I'd be able to eat cheese again) before I finally decided to just use it. 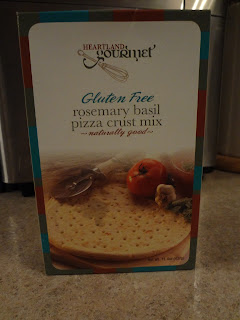 It looked tasty enough and I hoped that the pizza would still be good, even with its lack of cheese.

The dough was simple to make and easy to handle, spreading into the pan with ease. I brushed on some olive oil and then some pesto, instead of the traditional pizza sauce. 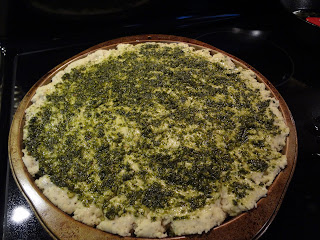 Then I fried up some sausages and cut up some veggies to add to it. 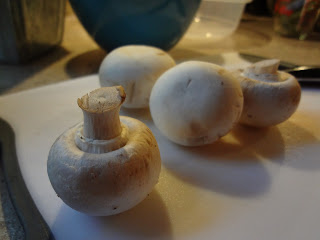 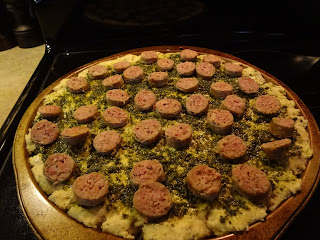 The sausages are special gluten-free ones from a local butcher shop and the veggies were bought at our local farmer's market. It felt good knowing where my toppings came from. Oh, and the pesto was some I made last fall and froze. 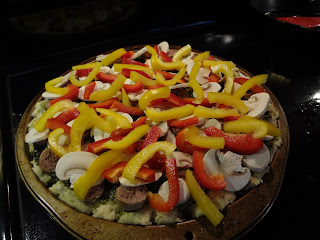 It was looking nice and colourful before going into the oven but I was a little concerned that it would dry out too much, with there being no cheese and all. I crossed my fingers and shoved it into the oven.

It started to smell delicious half way through the cooking time and then came out looking nice and tasty! Don't you think it looks good? 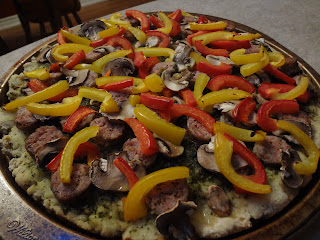 It didn't cut all that well and you definitely had to eat it with a fork, but overall it was quite tasty. You just couldn't think of it as pizza, or else you would be disappointed.

I probably won't be making it again anytime soon but I used up the crust mix and got to enjoy some "pizza" for the first time in a while. I was mostly pleased with how it turned out. I mean, how can you go wrong with something that has sausage on it?

Do you love pizza? Hate pizza? Feel indifferent to pizza? If you couldn't have it again, would you go into withdrawals?
Posted by Jenn0021 at Wednesday, May 08, 2013