I love raspberries. They are the perfect combination of sweet, tart, squishy and red. The best berry. I think I even like them better than strawberries. But maybe not as much as blueberries...

Anyways, since I love raspberries so much, it was only natural to want to have some of my own plants so that I can sneak out to the backyard and eat fresh berries whenever I so desire. Well, during raspberry season of course.

Last summer Dan and I picked up some of those easy plant your own raspberry plants. You know, the ones that come in a little bag that has a stick coming out of the top. They don't look too exciting but we were hoping once planted, they would blossom into a full raspberry plant. 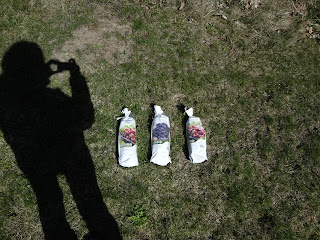 We happily planted two raspberry plants and one blackberry plant. Except they didn't take. The blackberry plant disappeared immediately and the raspberries kept getting pulled up. We were so confused as to what animal would come along, pull the plant out and then just leave it on the ground.

We replanted them the first couple times, hoping that we could still rescue them. But they continued to get pulled up. Finally, Dan decided to figure out what animal was responsible for the death of our precious raspberries, so he climbed up onto the garage roof and waited. An hour goes by and still nothing. In hour two, he witnessed Mia, our crazy dog, prancing by and pulling up both plants. She didn't even miss a beat in her walk!

So that was the end of our first attempt at raspberries.

We figured the stick looking plants were just too tempting to Mia so we thought we would go with plants that had actual leaves on them already. Back to Home Depot we went, purchasing two bushy raspberry plants. We planted them last summer and then promptly forgot about them. We rarely watered them and wondered if they would last the winter.

This spring, we were pleased to see that they had not only survived, but that they had grown and were looking healthier than they had last summer! Which can only mean one thing. Time for more plants! 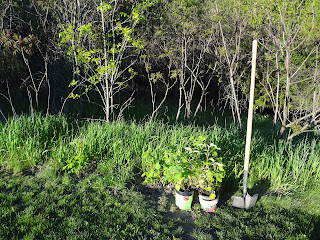 Since we had been successful with the Home Depot plants, we purchased two more. We then planted them near the older ones and are hoping they fill in quite nicely along the edge of our property. 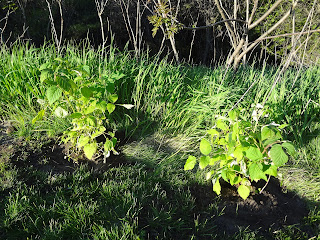 So far they're doing well and looking healthy. I'm excited to eat some fresh raspberries this summer! I'll keep you posted on how they do over the next couple of months, but so far Mia has left them alone. Silly dog.
Posted by Jenn0021 at Friday, May 31, 2013