A Date to Remember

Saturday, July 13th, started out like any summer Saturday might. We were visiting Dan's parents and spent a relaxing morning with them. We arrived home early afternoon and got a few things done around the house (more on that tomorrow), ate supper and headed out for our date night.

Our local city hosts a summer music festival and there are live bands playing at the local park every Wednesday and Saturday all summer long. We always ride our motorcycle in since it's so much easier to park and summer evenings are usually quite pleasant for a ride. Saturday was no exception. We hopped on the bike and went to see Deric Ruttan perform. 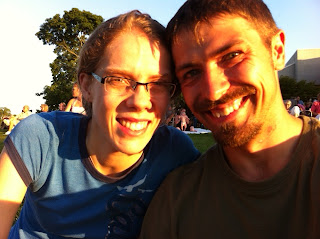 We curled up on a blanket and enjoyed some good ol' country music. 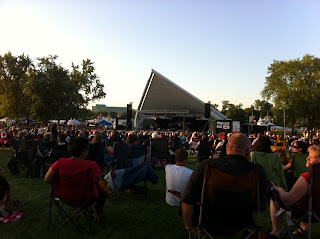 We bought some chips and a slurpee and enjoyed our date that cost less than $10. After it ended, we rode around the city a bit, just enjoying the beautiful July night. Shortly after 10:00pm, we decided it was time to head home.

And this is when the date took a bad turn. We were happily riding down a long stretch of road, about 10 minutes from home, when a deer jumped out in front of us. I was relaxed on the back, with my eyes closed, thinking of my pumpkin muffin I planned on eating when I got home when all of a sudden I was rolling down the highway screaming.

When I finally stopped rolling, I called out for Dan and he thankfully answered right away. We both kind of stumbled up and moved off the road onto the shoulder while he kept repeating that he didn't have his phone. He always carries his phone on a belt clip but it had been ripped off during the accident. But I had my phone. I never ever ever take my phone on the bike with us but for some weird reason, I did that night. I handed Dan my phone and he called 911 while flagging down the next car that drove by. They stopped and came over to help. Although I don't remember much, they were awesome. They took the phone from Dan and finished the 911 call while Dan and I lay on the gravel shoulder, holding hands and moaning. They made sure we kept talking and stayed awake but didn't move.

Finally the emergency crews arrived and we were strapped onto boards with neck braces and belts and taken off to the hospital via ambulance. It was so scary because I didn't know how Dan was and he didn't know how I was. I knew I was fine since the only thing that really hurt was my lower leg and ankle. My right shoe had been torn off in the accident and it had somehow twisted my ankle in the process. But I just kept praying that Dan would be fine because I honestly didn't know how I would go on living if I lost him.

I won't bore you with all the details of getting to the hospital and examined, partly because I don't want this post to be miles long and partly because its still kind of fuzzy in my mind. The doctors and nurses were amazing and got me examined really quickly. They were also good at giving me updates on Dan, so I knew he was okay.

Another amazing blessing was having a familiar face at the hospital. Glenda, a lady from our church, works in x-ray and she saw our names pop up on the list and immediately got worried. She performed both our x-rays and even did mine after her shift was over. She then stayed with us both until we were discharged and then drove us home at 2:00am. She was perfect to have around and helped calm us both down.

Our injuries are very minor and we are thanking God for his protection. We were going between 90-100 km/h when we hit the deer and we ended up 150-200 ft further down the road from the collision. It could have been so much worse. We both have minor road rash and are bruised and stiff. Dan has a broken thumb on his right hand and my right ankle is sprained. But that is it. A miracle, isn't it?

Here is a picture of the motorcycle after the crash and our crash site.


Now I'm going to show some pictures of our equipment just to show you how lucky we really were. The pictures don't quite do it justice as it is a little worse than it looks but still pretty good.


So there you have it. The night we hit a deer on the motorcycle. It kind of feels like a bad dream and that it didn't really happen to us. Although we are feeling sore and stiff, we are also feeling blessed that we got out so unscathed. Thank you God.
Posted by Jenn0021 at Monday, July 15, 2013