I really have to get a move on this if I want to complete my goal of trying 10 new recipes in 2013. I have a couple more months yet but I can't take a 3 month hiatus if I want to get this done.

Anyways, back to today's recipe. Last week, I was trying to make meals using ingredients I had around the house instead of buying a whole whack of groceries. So when I came across this recipe for Lentil and Spinach Curry, I knew I had to give it a shot. 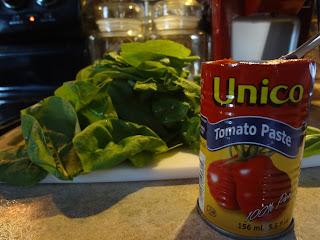 You won't hold it against me, will you?

I tried to take step by step photos of the process but they just look kind of gross, so I'm not going to post them. 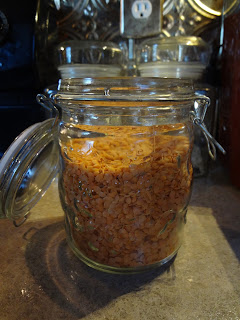 I will give you my review on the recipe though. We decided to serve the curry lentils over rice, to give it that extra oomph and to add a different texture than just mushy lentils. And boy were they mushy. I'm pretty sure it's because I cooked it for an extra half hour (Dan was late arriving home for supper) so I won't be holding it against the recipe.

And the taste wasn't as amazing as I had expected. But once again, I blame that on my old curry powder. I've heard that curry powder doesn't have a long shelf life and I'm pretty sure mine has been on the shelf for a little too long. 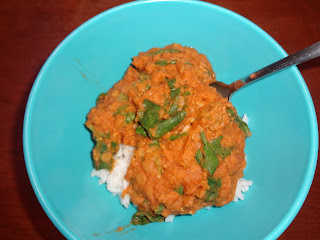 Personally, I enjoyed the meal and even thought the leftovers were pretty tasty. I don't think Dan was in love with it though, but then again, he could do without most lentil meals.

I want to give it another shot and use fresh curry powder and not overcook it by 30 minutes. Then I will properly judge it. Because I think all recipes (unless they are completely inedible) should be tried at least twice. That way, the second time around, you can make any small changes you think would make it better. 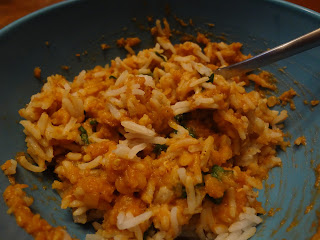 So there you have it. Yet another recipe that didn't win me over completely. I think I'm just about ready for one that knocks my socks off. Anyone have any suggestions or recipes they want to share with me? Just remember, I can't eat gluten or dairy.
Posted by Jenn0021 at Friday, August 23, 2013

Email ThisBlogThis!Share to TwitterShare to FacebookShare to Pinterest
Labels: Cooking