It's about time I gave you guys an update on how we are doing since our motorcycle accident in July. I haven't really posted much about it since my blog post on using crutches and complaining I had nothing to blog about.

Since today marks two months exactly since the accident, I thought it was the perfect day to let you know how we're doing. So here is your update!

We're doing really well actually and have healed up nicely. I'm basically back to normal and usually forget that I ever even sprained my ankle. There is still a small mark on my leg though, right above the sprain, where I think I damaged some tissues. It is also still pretty sensitive to the touch, as is most of my bruising. But for everyday activities, I'm fully functional. I'm not back to running yet but have been taking some small walks down the road. 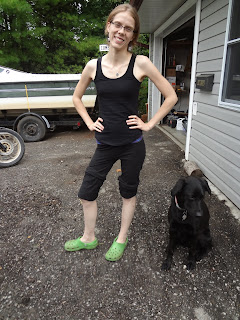 Dan is a little slower healing up, because his injury was a bit more serious then mine. He tore tendons in his right thumb, which pulled small pieces off the bone. So basically, it takes forever to heal. The good news is though, that he graduated from the big awkward cast to a smaller more functional splint! 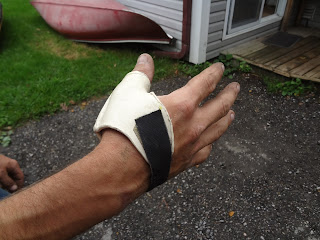 So at least now he can work and do stuff with his right hand. It's still annoying to wear and gets in the way of a lot of things, but it's protecting his thumb and letting it heal. He is going to physio once every couple of weeks and has to take it off when he's home and do thumb exercises. We're hoping that it will be back to normal soon.

That's how we're doing. Still healing but overall doing a heck of a lot better than we were two months ago. And still appreciative of how easy we got off, considering.

The bike is mostly fixed and back up and running. Dan spent the first couple of weeks finding parts for it and getting it into usable condition again. Since most of the damage was to the body, it was fixable. Although some parts are harder to come by, like the instrument cluster. We're keeping our eye out for a new one but for now, the old one has some black tape on it. Just don't look too closely and it looks fine! 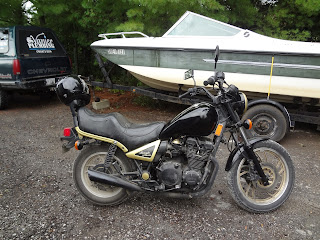 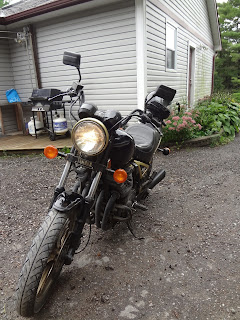 Dan has been out on it a couple times, usually just quick trips into town during the day. Definitely no night riding. I haven't been out yet, mostly because I don't have any more riding gear and I'm not getting on it without a leather jacket. I'm worried though that the longer I wait, the harder it will be. I'm scared of riding the bike again. I really am. Sometimes, when I think about it, I just imagine the last time I was on the bike and the whole accident just comes flooding back. I have a hard enough time when Dan is out, convincing myself he's probably crashed. So who knows when I'll get back on it and how I will feel when the time comes.

That's it for the update. If I missed anything or you have any questions, feel free to ask!
Posted by Jenn0021 at Friday, September 13, 2013