Summer is coming to an end and so is my garden. It's hard to believe that it is already September and there will only be a few more weeks of these What's Growing Wednesday posts. The days are getting shorter, the nights colder and the produce slower. I'm not ready for winter yet.

Good thing it isn't winter yet! We still have a little ways to go before the snow flies and I am going to soak up every bit of summer there is left.

This weeks garden is looking even sadder than last week. More and more produce is winding down and we're harvesting more and more each week. 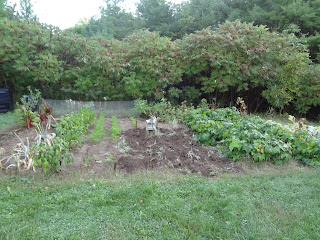 We dug up the potatoes on Monday, that's why there is a large patch of fresh dirt in the middle. They were basically all dead so we harvested them all, a total of almost 45lbs. 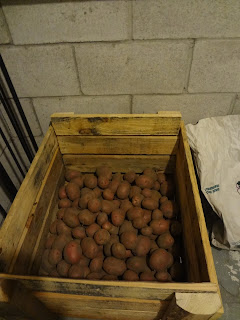 Most of them are safe and sound in this crate in our cold room, but there are a few that remained upstairs to be eaten first. You know, the blemished ones or ones that are too small to justify storing for multiple months.

Our peppers are doing fabulously and I'm basically picking a couple each time I go out to the garden, I think we may have gone a little overboard with seven plants. 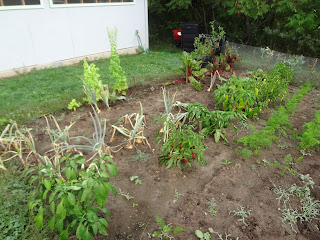 Oh, and the remaining onions will probably be harvested later this week. We already pulled up half that are on our front porch drying.

The beans are still going strong and I think we'll be eating them constantly throughout the year. We currently have 52 bags in the freezer and the plants don't look like they'll be slowing down anytime soon. 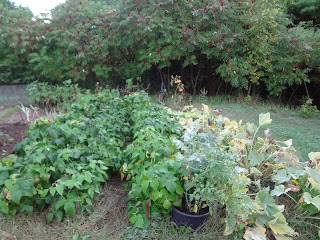 That's it for this week folks. Only a few more weeks of garden updates and then I'll be starting a new series in October. Want to guess what I'll be talking about?
Posted by Jenn0021 at Wednesday, September 04, 2013