I figured it was high time I did a post on my exercise goals, especially after I had such a great start to the Spring/Summer with my Fab Ab Challenge and Couch to 5K. I decided to do some research on when my last post on exercise was and was horrified to discover it was from the beginning of June when I blogged about my 5K run.

Yup, you read that right. I've been one lazy couch potato this summer and fall. I have done zilch in the working out department. 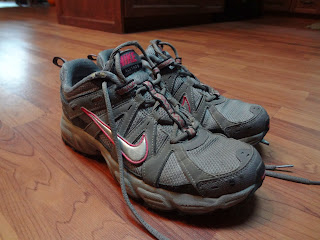 Although I do have a decent excuse. At least I like to think it's decent. I stopped running mid-June because I was having chest pains and upon a visit to the doctor, discovered I had an irregular heartbeat. I was sent for some further testing to make sure it was just a murmur and nothing more serious but until I heard back, I opted to stop the running. And then it got really hot. And then we smucked up a deer on the motorcycle and I sprained my ankle. And then I wanted my ankle to heal really well before I started anything back up again. And then I got pregnant. And then I miscarried. And then I had a rough recovery from the D&C. And now it is now.

But now that all my excuses are done and over with, it's time for me to get back on the exercise bandwagon! I've got plans! Want to hear them?

First up, going for regular walks. My ankle (and the rest of me) just isn't up for running again yet and I know full well that once the colder weather hits, I'm not going to be up for 1/2 hour runs outside. There's no point in even pretending. But I figured that I could totally handle walks for now and I will get back to running come Spring.

Second, indoor workouts. My sister Jackie lovingly put together a little daily workout for me to do which includes sit ups, push ups, jumping jacks, lunges, squats, arm circles and some yoga positions. The best part about it, is that she made it totally flexible. I can start out with the absolute basic number of each and then work my way up as I get better at it.

Third, weights! I was planning on getting into some weights last Spring but it just never happened. I have a Jillian Michael's Shred-it with Weights workout video that was lent to me and I plan on giving it a try, finally. 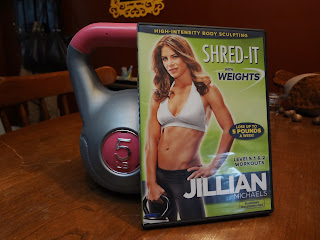 Now since I know myself so well, I know that I won't actually stick to all of this if I start it all up tomorrow. I'm too lazy for that. So my plan is to start slow and work my way up. I am going to start walking at least twice a week and then as I get a bit more comfortable with that, I will add in some of my indoor workouts and then the weights video. I think that sounds doable.