Just One of Those Days...

You know those days, where everything seems to be going well and then all of a sudden out of nowhere, it just flops? I had one of those days last Friday.

It started out so good too. I woke up in a cheery mood and decided that I was going to be super productive and get a ton of stuff done. I tidied the house, did the dishes, collected the eggs, made plum jam, made an upside down plum cake and started making bread (from scratch) all before 11:00am!

I felt good. So proud of myself.

And then it happened. While I was taking my plum cake out of the oven, it slipped. 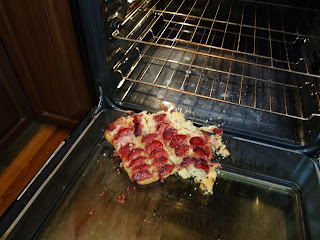 And flipped onto the oven door.

I admit, I swore when it happened. It made me so mad, after all that work, to lose all my fabulous GF/DF cake I made. But after swearing and feeling just about ready to cry, I decided I could totally salvage some of it.

So I did what any sane person would do. I pulled out a spatula and scraped as much as I could up into a bowl. 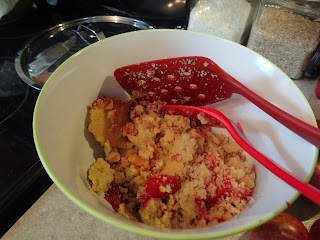 And then I tasted some, just to be sure that it actually turned out. Although looking back, I should have tasted it before I went to the work of saving as much as I could.

Unfortunately, there was still quite a bit of cake smooshed between the door and the bottom of the oven. 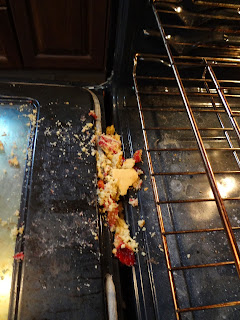 But it was too hot to work with and it was making me too grumpy, so I left it and went for a walk. At least I got a walk in!

Upon my return, I realized I had to deal with it immediately since I needed the oven to cook my bread that was rising. So I got to work cleaning up the sticky crumby mess. It was everywhere, including the bottom drawer of the stove. 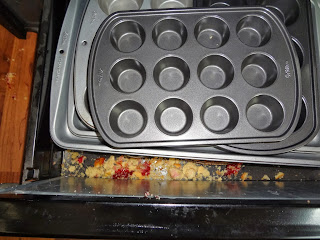 But I finally got it all picked up, minus a few crumbs on the floor but Mia dealt with those.

Once I had the stove ready to go again, I checked on my plum jam that was cool by now. Only to discover, it totally didn't set. Again. Maybe I should just give up on jam. 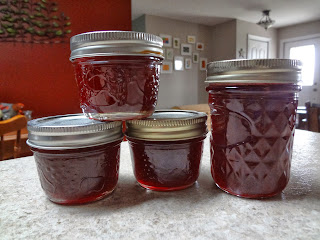 So after the flop of the cake and the runny jam, I was beginning to get really concerned about the bread. This was the first time I have made bread from scratch in probably four years.

But alas, the bread worked. Good thing too, since the rest of my day had gone to the dogs. 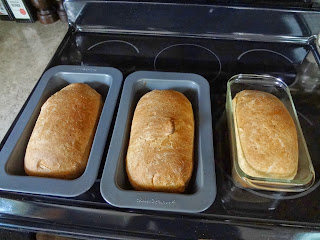 Just to clarify, this bread is NOT gluten-free. It's to freeze for Dan to make sandwiches with. I have yet to try gluten-free bread but I think it should be next on my challenge list.

So overall, the day wasn't a complete disaster. But it definitely didn't go as planned and my proud productive feelings only lasted a couple hours in the morning. Once the bread was done, I gave up on the rest of the day and worked on some knitting while watching Downton Abbey.