I don't even really know where to begin for this post, since it's been in the making for almost a year. Are you shocked? I feel like all of our projects take just about a year to finish, it's kind of pathetic. Oh well.

Our house was completely finished when we moved in so we really haven't done much to it. It's mostly been some decorating or fixing up of a few small things/rooms. Really not all that much. Especially since everything is in pretty good condition, we couldn't justify spending money to replace something that worked just fine.

But last Christmas, we were given the most awesome light fixture from my sister Stacey and her husband Eric. Pure awesomeness it is.

We knew immediately that it would go in our laundry room but didn't get around to making the switch for a couple of months. My plan was to do detailed before and after shots of the room with the old light fixture and the new light fixture but that didn't happen. One day while I was at work, Dan got bored and changed out the light. So I came home to this. 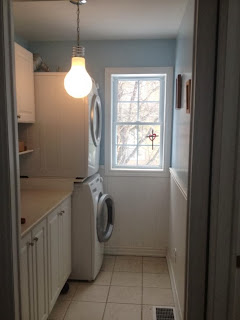 Didn't I tell you it was an awesome light fixture?

Anyways, as you can see from the above picture, it was off centered and hanging too low. It was about 1/2 an inch above my head and one of the cupboard doors bumped it when opened. But, once again, we didn't get around to fixing that for another couple of months.

So come September, we decided it was time to move the light over. This time though, I captured some before shots. 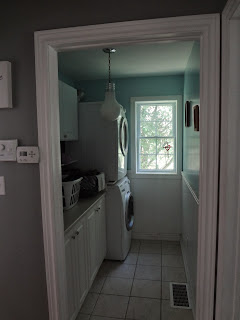 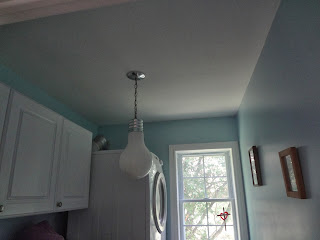 Once that was out of the way, we Dan got to work. He had to keep running back and forth to the attic to work out the wires and where to cut and all that. I basically just stayed out of his way, since he was so focused.

Finally, it was done. The new hole was cut and the electrical box was moved over. 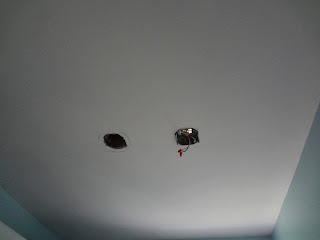 Then Dan patched up the old hole, mudded it and then sanded it smooth. These two steps (moving the box over and patching the hole) took a weekend. Next up, painting!

But that took us another month to do, since we're so slow at things like this. We finally purchased the paint and I finally got around to painting the ceiling last week. 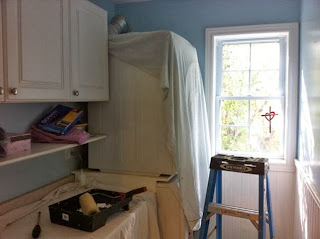 Once it was dry, we could FINALLY hang the light back up! And I'm telling you, it looks amazing and so worth the hassle of moving it over and making it shorter. 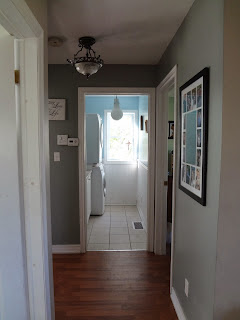 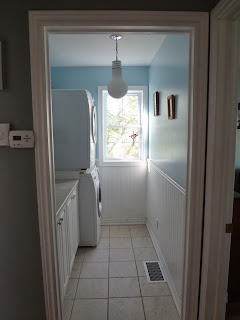 Doesn't it look spectacular? I love how it's centered in the door frame now and that I'm not scared of bumping my head on it. It makes the room look so much cooler than before and it's a definite improvement over the old boring light. And, we did the whole project for free! We were given the light and used supplies we had on hand to move it over, patch and paint. Well, we bought the paint but it was really for the guestroom so I'm not counting the cost for the laundry room. 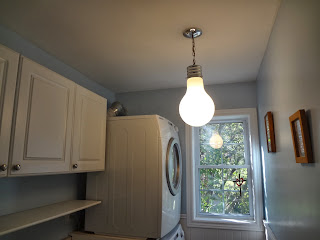 What do you think of it? Do you have any special light fixtures in your house? Or any other funky objects?
Posted by Jenn0021 at Tuesday, October 29, 2013