It's time again for me to share my tips and tricks on saving money with you all. I really hope you're enjoying my new series as much as I am enjoying writing them. I always love feedback, so let me know what you think!

We've already touched on tracking your spending and making a monthly budget, but this week we will be talking about just saying no.

Sounds easy doesn't it? I mean come on, it's just a one little word: no. Say it with me everyone, NO! 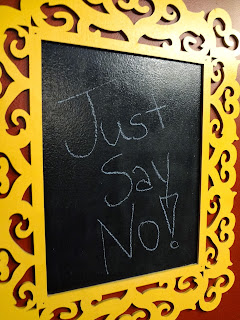 The hard part comes when you have to say it to things you actually want. It's easy to say no when you don't want to do something or buy something or go somewhere. But it's really hard to say no when your friends ask you to go out for dinner or that new shirt is just calling your name or you've had a bad day and need a chocolate fix.

But if you want to curb your spending and actually learn to spend less than you make, you're going to have to start enforcing the "no".

Now I'm not saying that you have to say no to everything. Believe me, it won't work. You'll end up feeling deprived and angry and go on a crazy spending blitz where you totally hate yourself afterwards. You will have to say no to some things though. You're going to learn to prioritize and compromise.

When you make up your monthly budget, be sure to leave some money for fun things. Obviously the amount you put into this category will depend on where you are in your budgeting, but it's really important to have some money in it. Just be sure to stop once you have reached your limit. If you budgeted $20 for "fun stuff", stop spending at $20. Like I said, prioritize and compromise.

Budgeting takes self control. It's a constant battle for me, this saying no thing. We rarely spend any big amounts of money but all those little things add up and they add up quick.

So will you join me for a challenge? For the next week, I want you to really think before you pull out some cash or your debit or credit card. When you're asked for dinner or drinks with friends, ask yourself "can I really afford this right now"? If you can, go for it! If you can't, say no and plan to get together with them for something cheaper or free at a later date. Same goes for shopping. Don't impulse buy, only buy things you actually need. Do you think you can do it? Check back in next week to let me know how you did!

Email ThisBlogThis!Share to TwitterShare to FacebookShare to Pinterest
Labels: Budgeting