A Plan to Date

The winter blues have officially set in. There is something about January that just gets me down and I usually stay in a semi-permanent funk until at least April.

During the winter months, we tend to just hibernate and spend 98% of our time in the basement by the fire either watching TV, playing Wii or each of us on our phones/computers surfing the web. While this all sounds fun for a bit, after a while it starts to affect both Dan and I, especially our relationship.

So this year, we have decided to fight back! While we are still going to let ourselves have lazy evenings of watching a movie together, we have made some plans (and rules) that have come into effect starting last Sunday.

I like to call it: A Plan to Date. We have decided that each week, we have to do something fun together. In order to help us along, we have started a list of fun things that we can do and each week we get to look at this list and choose one "date". When the date is completed, we will cross it off and move onto the next week and next date. 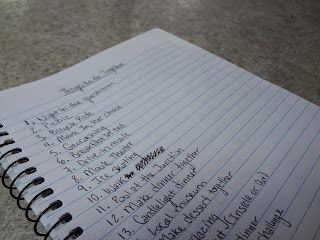 I'm quite excited about it and I think it will be a good way of helping us get off the couch and get out together. This week we are starting off with a nice walk in a local park, since the weather is pretty decent.

We have also made the rule of no cell phones or computers during mealtimes or after 6pm, unless permission is granted from the other person. There is, of course, the exception of answering the phone if it rings, especially for Dan since he owns his own business. But we want to focus more on talking with each other and interacting and less time staring at a screen.

Another thing we have started is reading together. We have chosen All Creatures Great and Small by James Herriot and we are reading it aloud in the evenings. This way we still get to curl up by the fire but we are doing something a little more stimulating than staring at the TV. 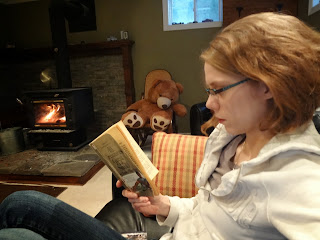 So that is our plan to fight back against the winter blues and consequent laziness, as well as work on strengthening our relationship. What do you do during the winter months? What is your method of staying chipper?
Posted by Jenn0021 at Wednesday, January 15, 2014