I planned on starting this series right after I had finished my Thrifty Thursday series, but alas, December was basically a write off and I just didn't get around to it. But I figured you guys wouldn't mind the wait, since it's going to be an awesome series. I mean really, who doesn't love reading about food and looking at pictures of said food?

Now I think that's enough of an intro and we can get right to the point of this post, roast chicken. I decided roast chicken would be a great way to start off this series, seeing as it's winter and more people are using their ovens. Plus, I have about 12 whole chickens in my freezer so this is a regular meal in our household.

I also got to thinking that maybe some of my readers feel intimidated by making a roast chicken and I wanted to put your minds at ease. I made my very first roast chicken the first year I was married and it was such a flop that I didn't attempt it again for another 3 years. I also found out that my older sister made her very first roast chicken last year! Which means, I bet you there are quite a few people out there who haven't tried it yet or have tried it and failed. I'm here to share my simple method of making a roast chicken and I am confident that you can make it too!

First of all, you need to have a whole chicken. We raised our own and then had a local butcher kill and freeze them for us, but you can find one at any grocery store. 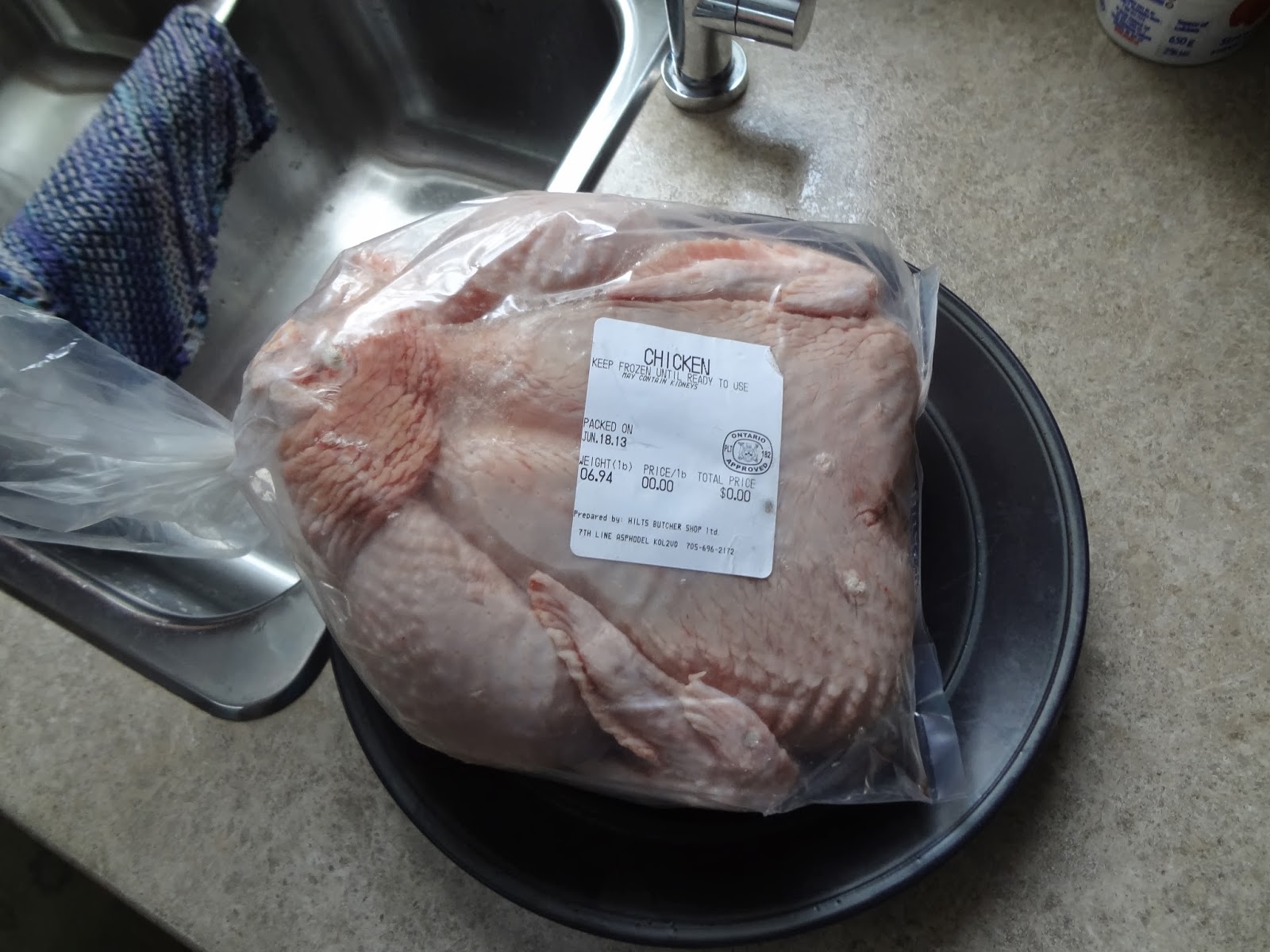 Next step is to rinse the whole chicken in cold water, being sure to remove anything that is in the cavity. Once it's nice and rinsed, place it in your roasting pan and pat it dry with a paper towel.

I got my "recipe" from a good friend in Alaska and it's the one I use 99% of the time. It just works well and makes tasty chicken, so I haven't ventured to try much else yet. I coarsely chop up an onion and an apple and then stuff it all into the cavity of the chicken. 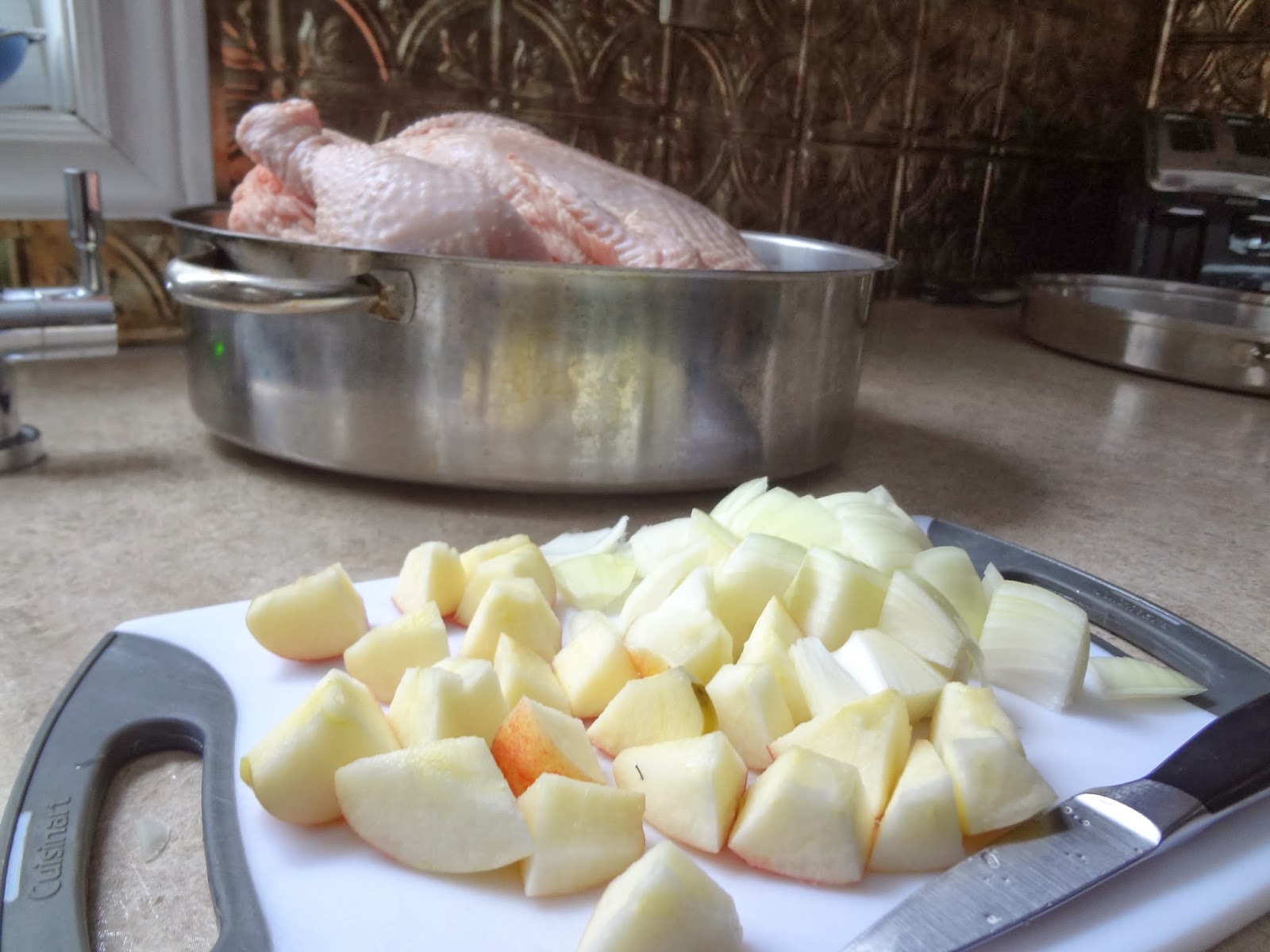 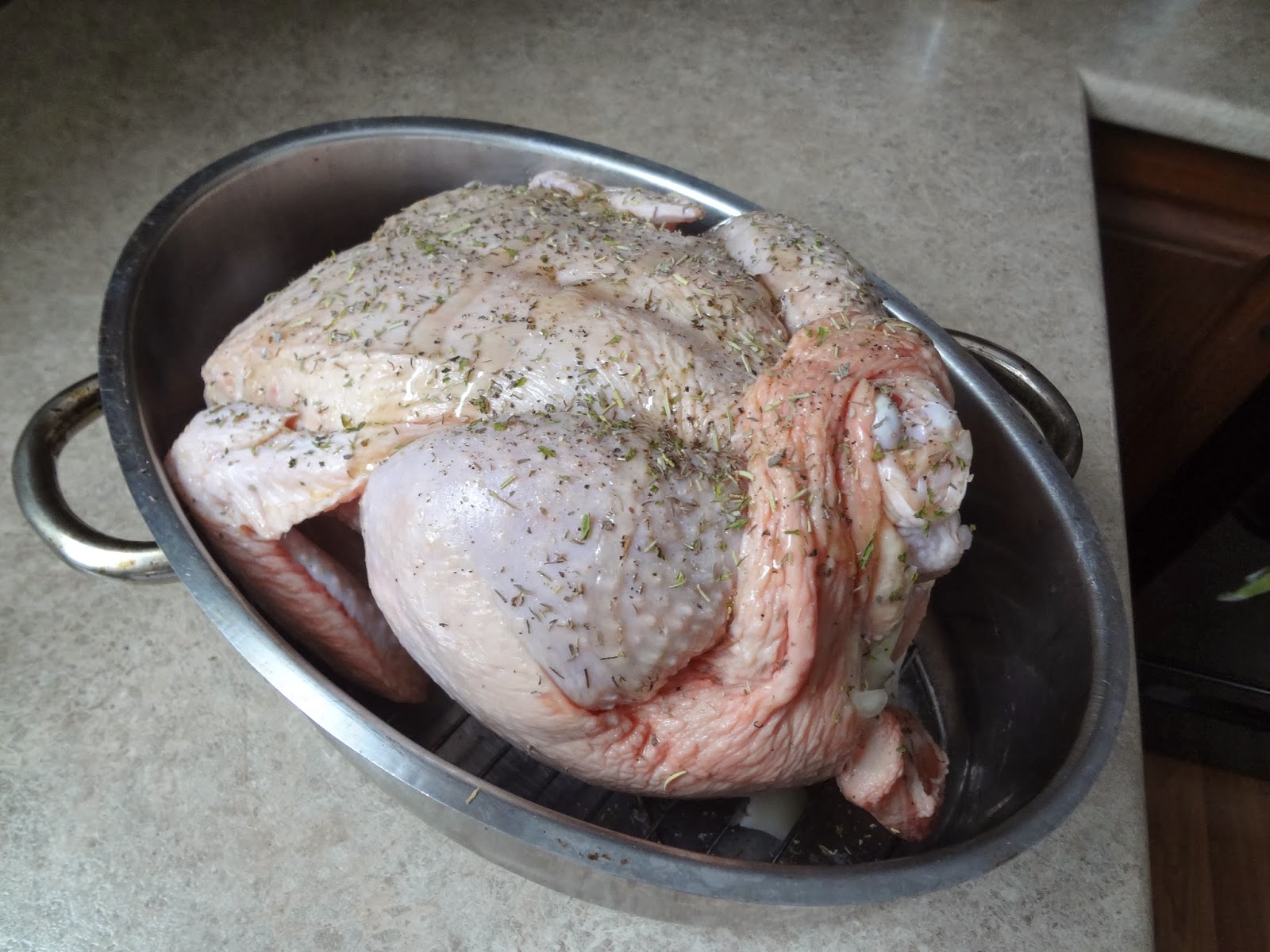 Before putting it into the oven, I cover it well with tin foil and then put the lid tightly on it. I cook my chickens at 350F for approximately 20-30 minutes a pound. This specific chicken was closer to 7lbs and I cooked it for 3 1/2 hours. It really depends on your oven so be sure to keep an eye on it and check it with a meat thermometer just to be safe. 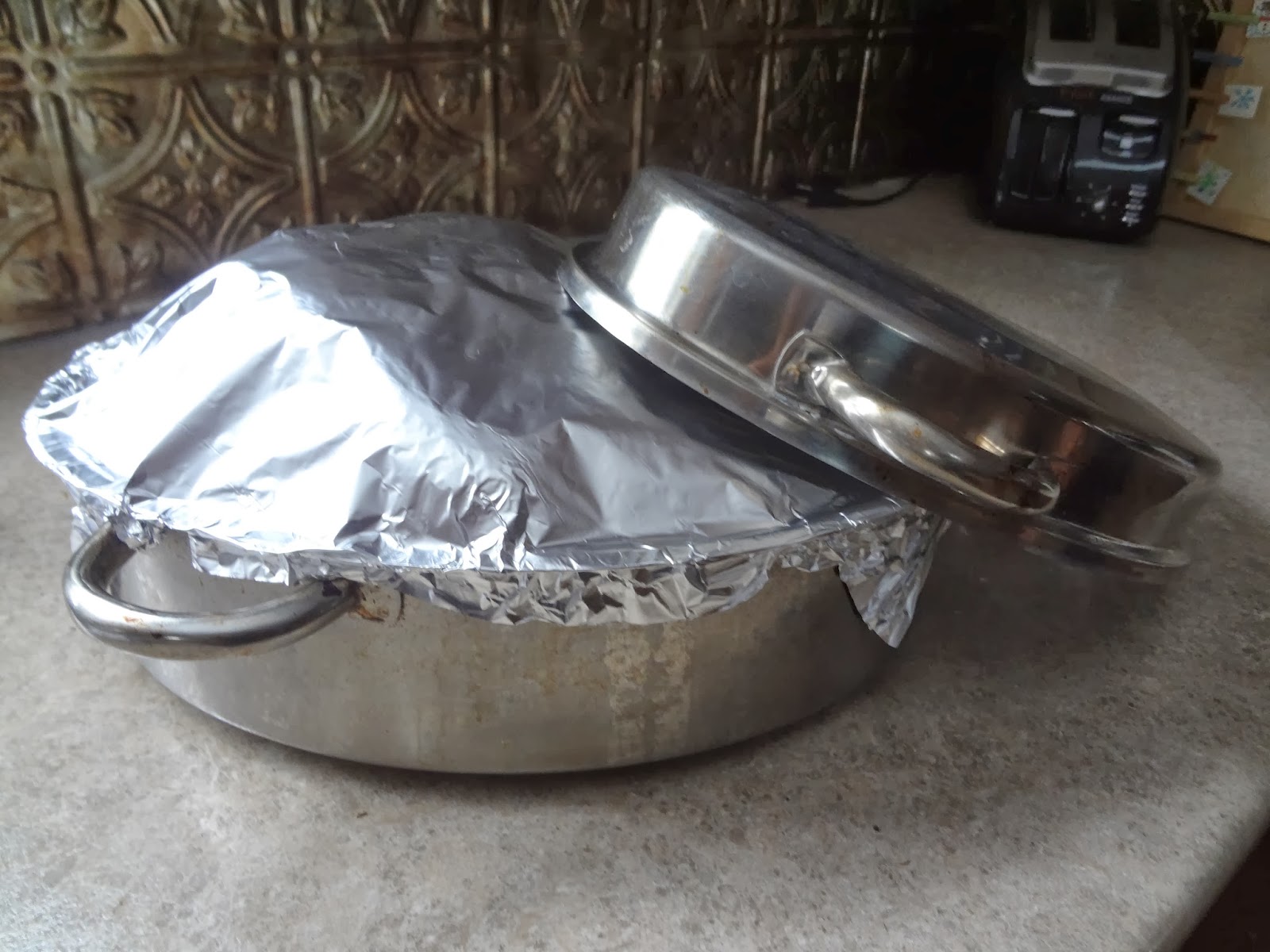 Once the chicken is cooked, I then remove the lid and tin foil and put it on broil for a few minutes to let the skin get golden and crisp. 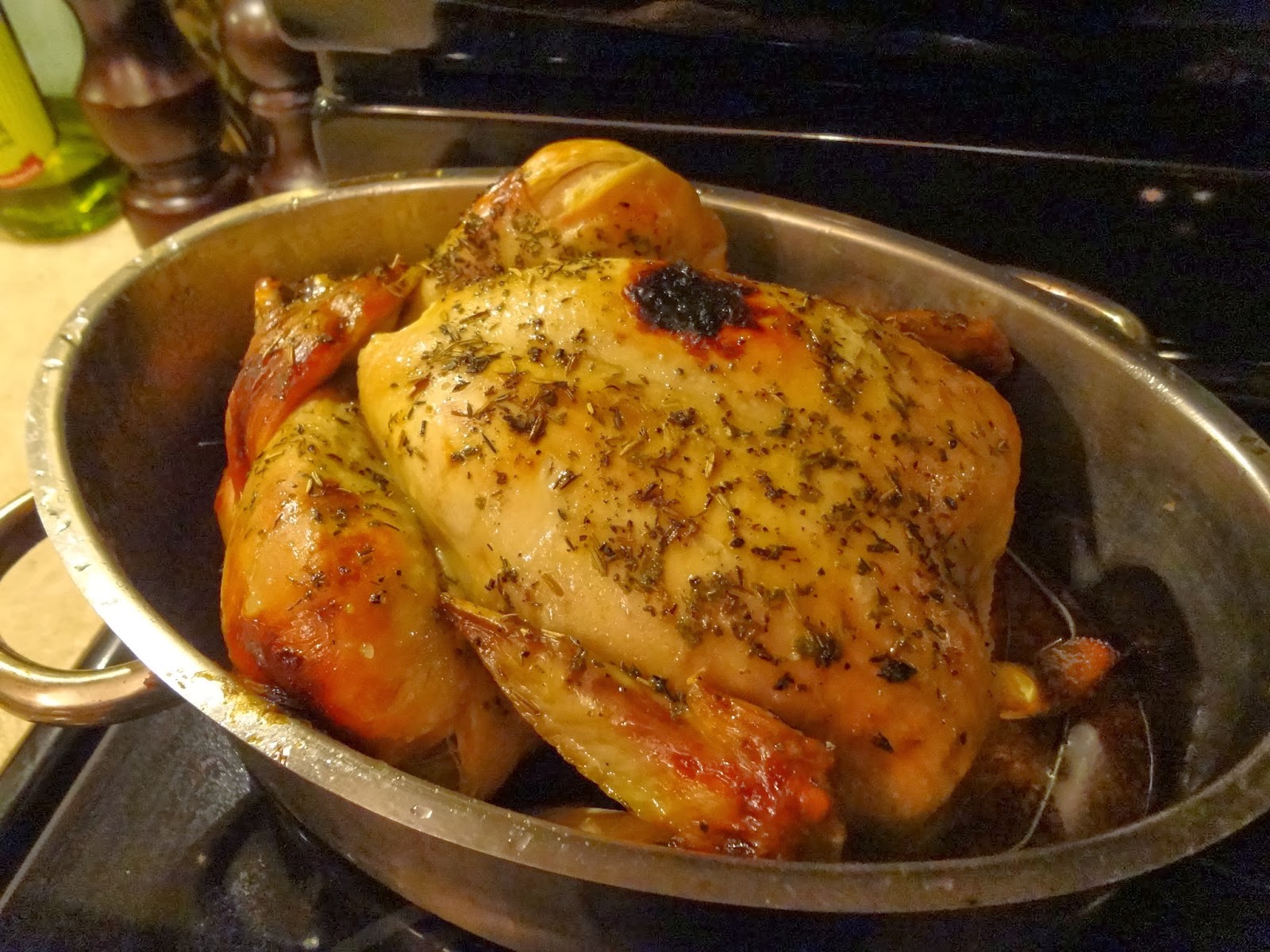 Just ignore that nice black spot on mine, okay? I'm not sure why only that spot burned but I think it had something to do with my turning the oven to broil and then trying to finish up the dishes without checking on it.

Once we have finished eating all the chicken we want for that meal, I then pick all the meat off the carcass and boil the bones for broth. Although I do admit, the first few chickens I made, I totally tossed the bones and skipped the broth step, so don't feel pressured to do that if you find it to be too much work.

But doesn't that chicken look good? And doesn't it sound pretty easy to make? What about you, do you feel confident making a roast chicken or are you a little more nervous like I used to be? Do you have a favourite way of cooking them?