For some strange reason, I decided that doing a nice piece of string art would be a good idea. I thought to myself "how hard can it be?" and decided the work would be worth the beautiful piece I would produce.

I'm not so sure I agree with that above sentiment now that I'm on the other side of the project. Although it sure is pretty. 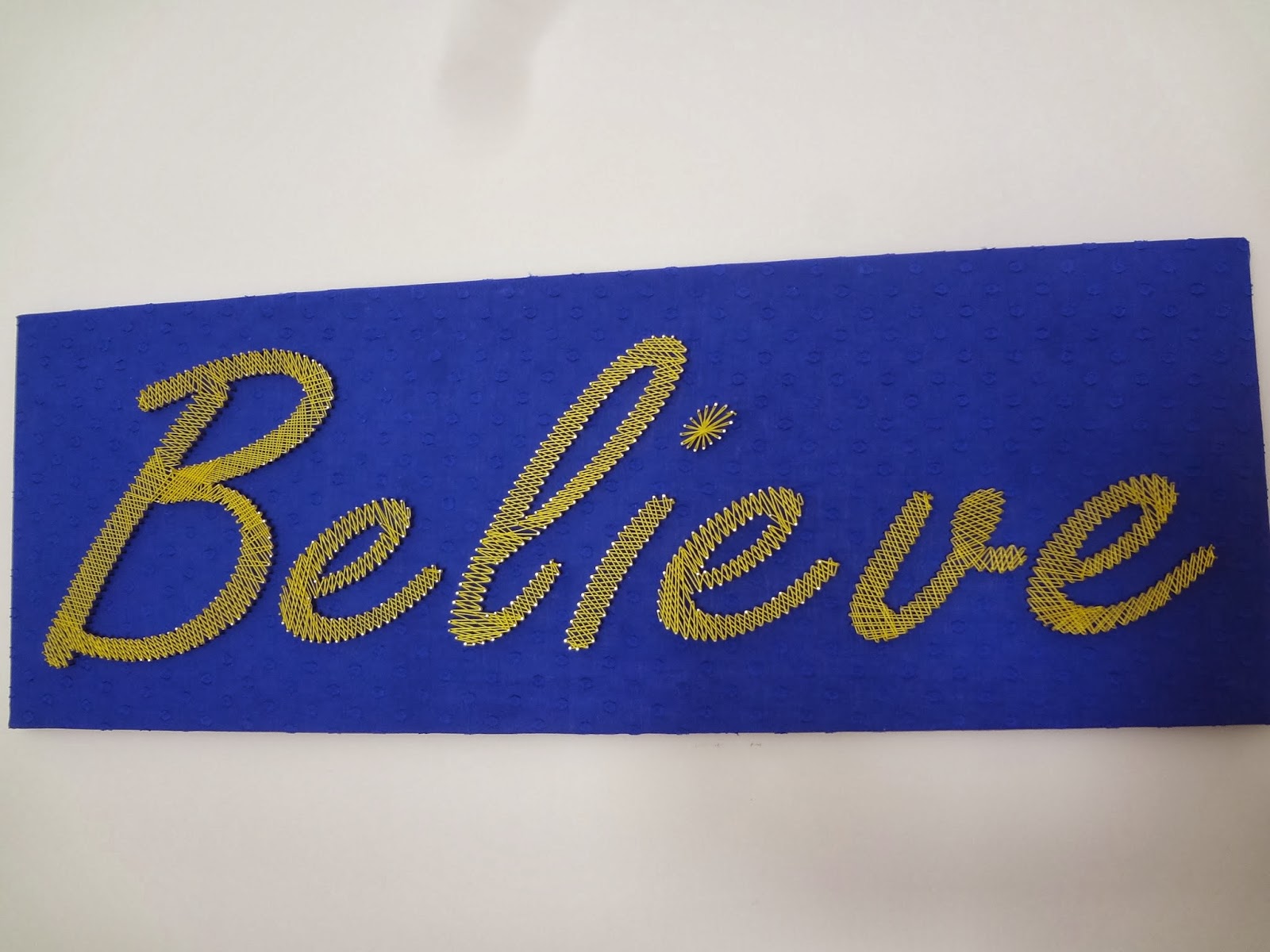 But gosh was it a lot of work! I seriously spent probably close to 12 hours on this project and that's probably still off.

Let's start at the beginning shall we? First up, purchasing supplies. We chose to use a piece of plywood and cover it with fabric instead of using cork or painting some boards like some other people do. Really, it's a personal preference so you need to choose what works best for you.

We chose our word first and played around with it on Microsoft Publisher until we liked the font and size of it, then printed it out as a banner. That way we knew how big we wanted the sign and how much plywood and fabric we needed. 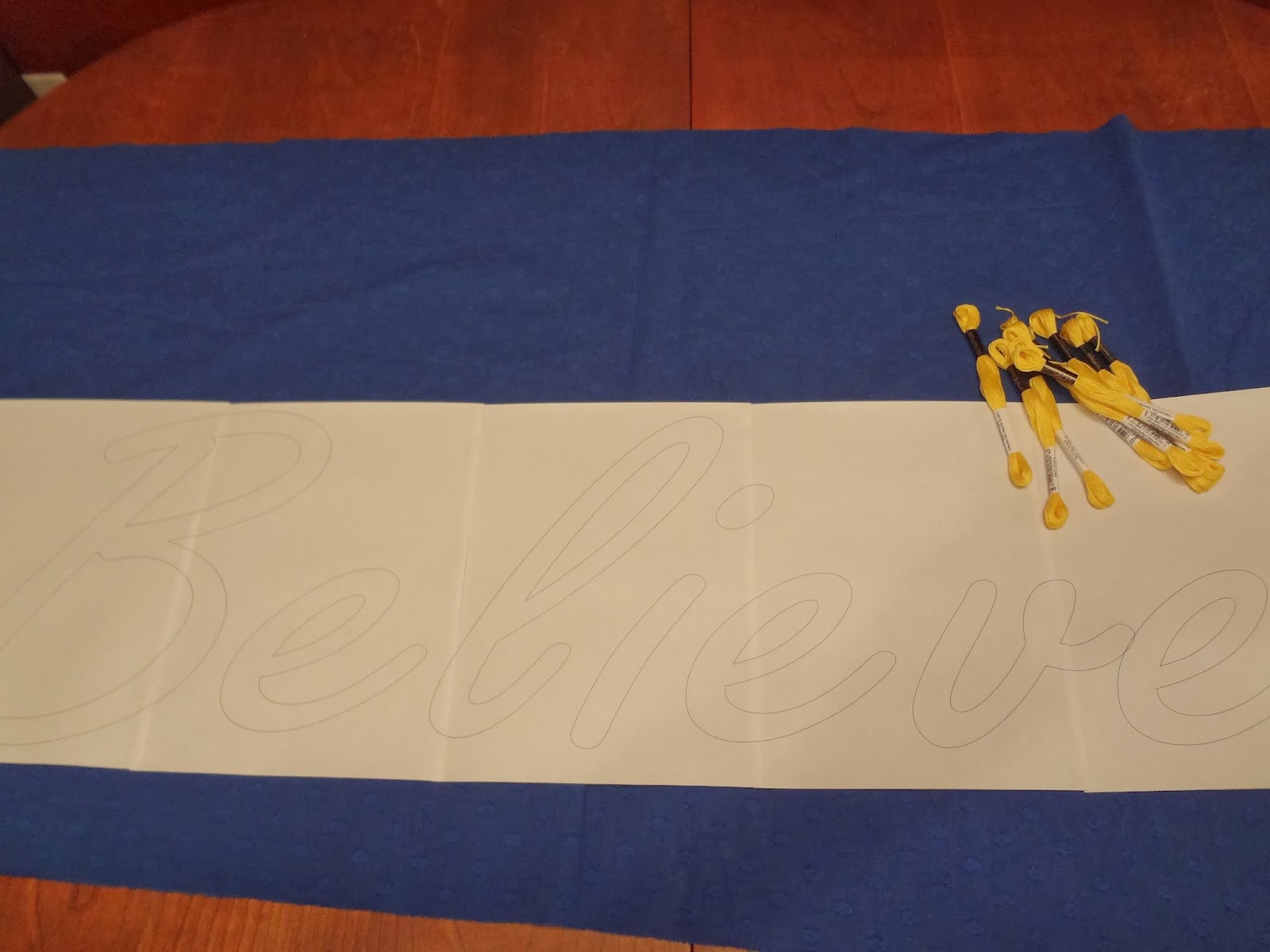 It took me forever to actually choose colours for the fabric and embroidery thread, but I'm really happy with my final decision and I think it looks fabulous.

Next up, stapling the fabric to the plywood. 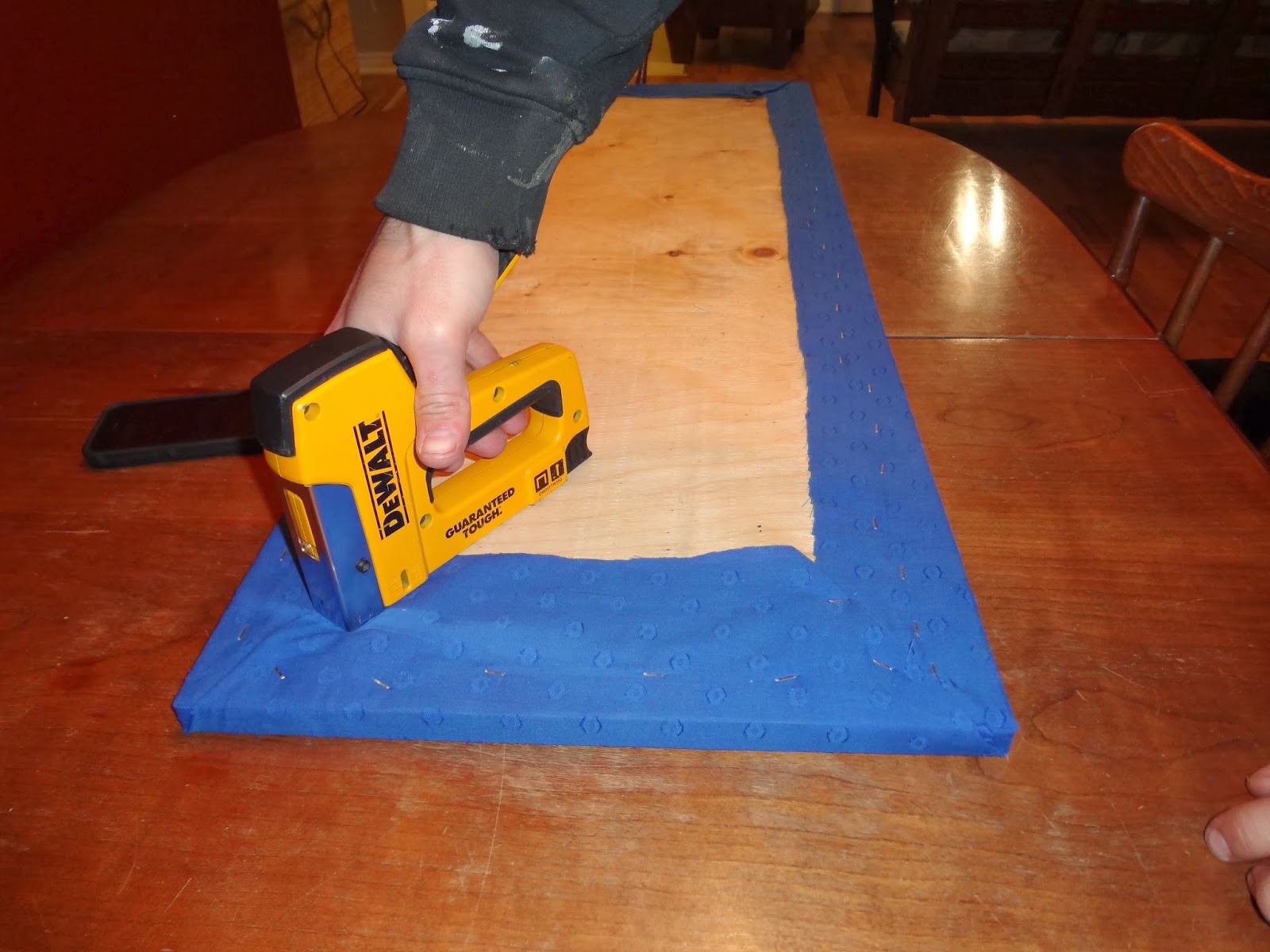 Once this was done, we had to move on to the tedious tasks. Dan very kindly gave me instructions and then left me be, since it was my project. Although he did come back to take pictures and comment on my progress.

The first tedious task was marking the paper to show where I would put nails. I had to put a dot every 1/4" along every letter. It felt like it took forever. Little did I know, this job was the least of my worries. 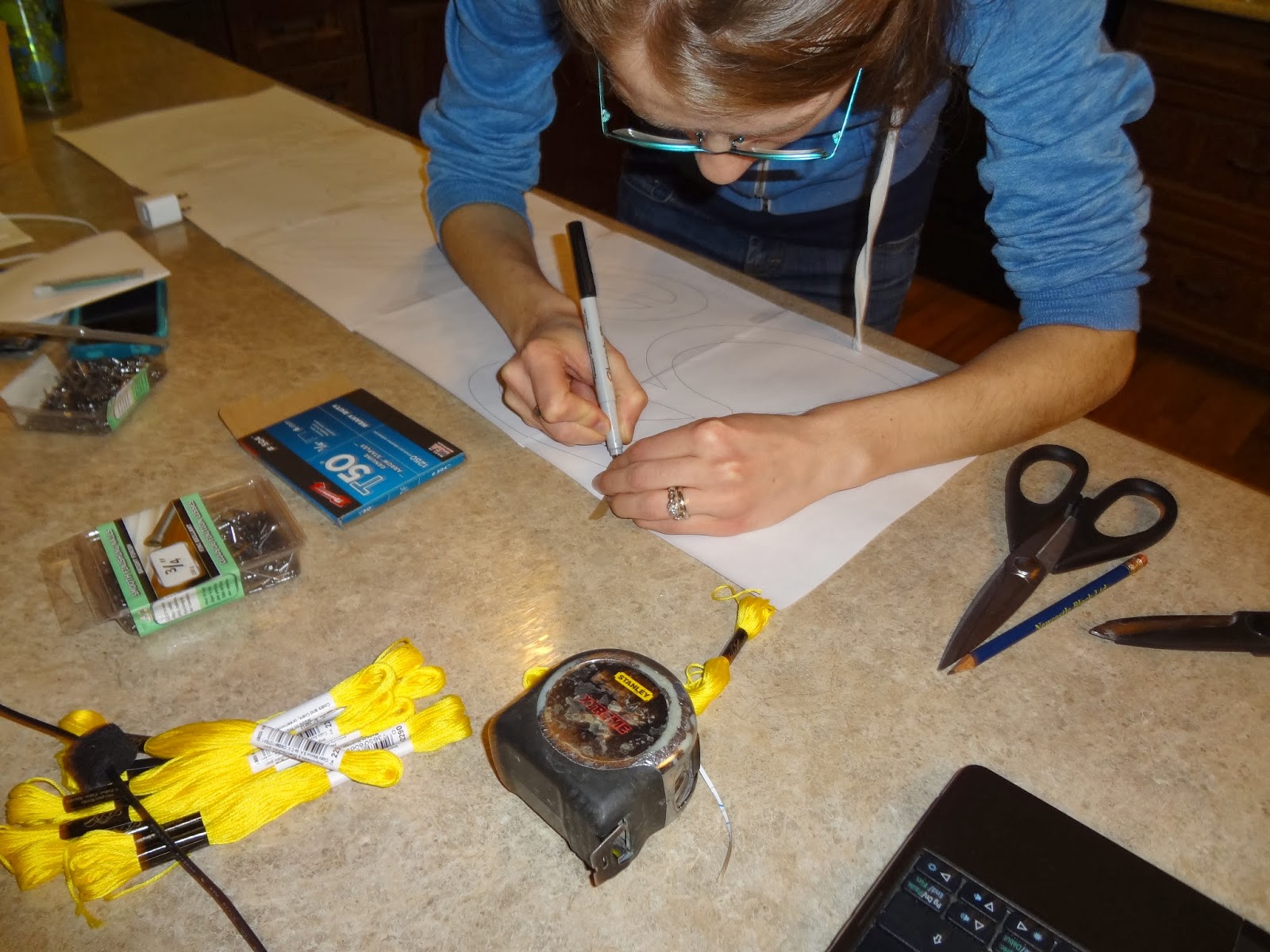 I did have to make a minor change to the 'v' though, since we didn't like how it touched the 'e'. 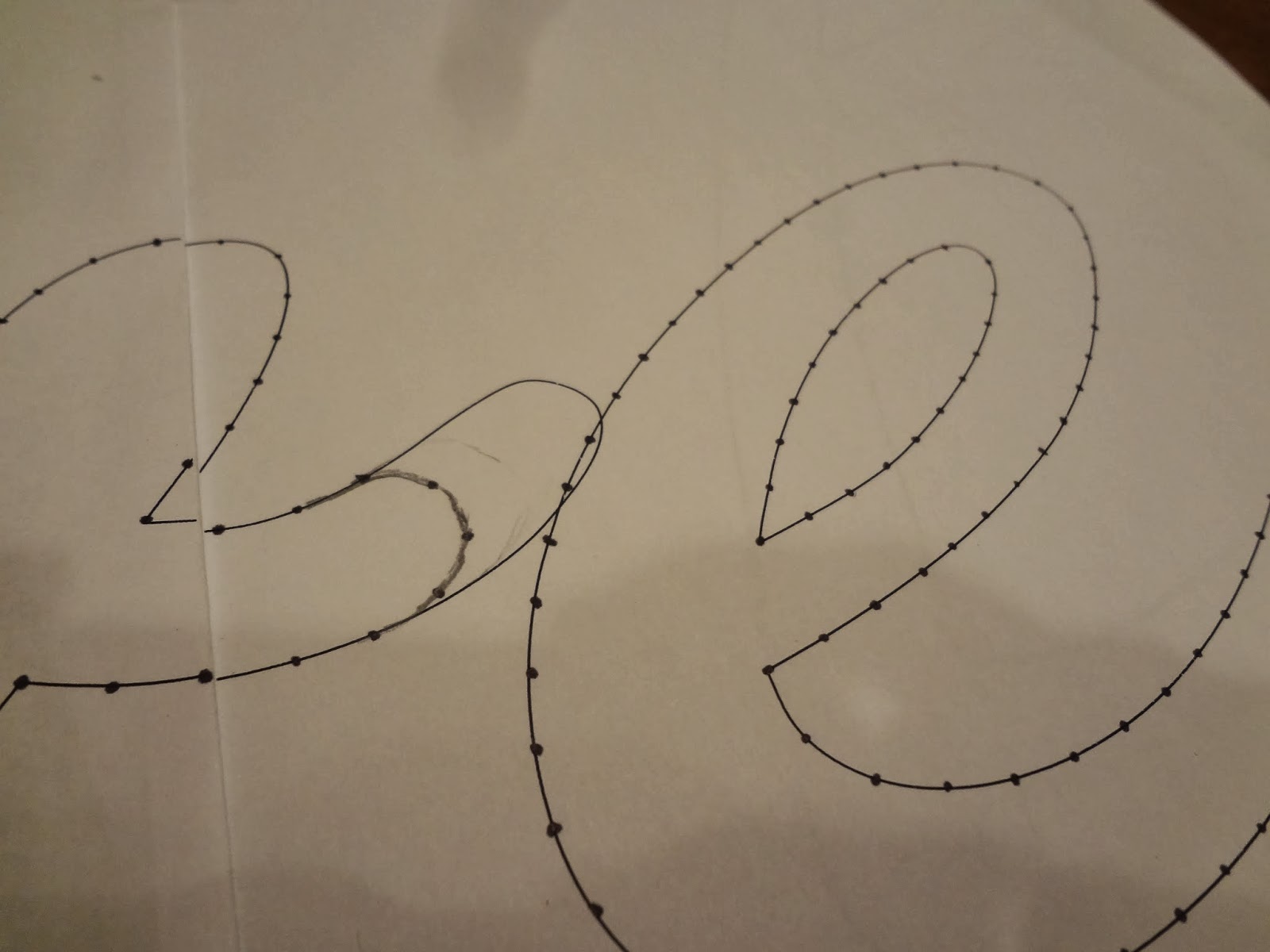 You can see in the above picture how my dots looked by the end. Super time consuming, right?

But the next step was way worse, nailing each tiny nail into every single little dot. It basically took forever. 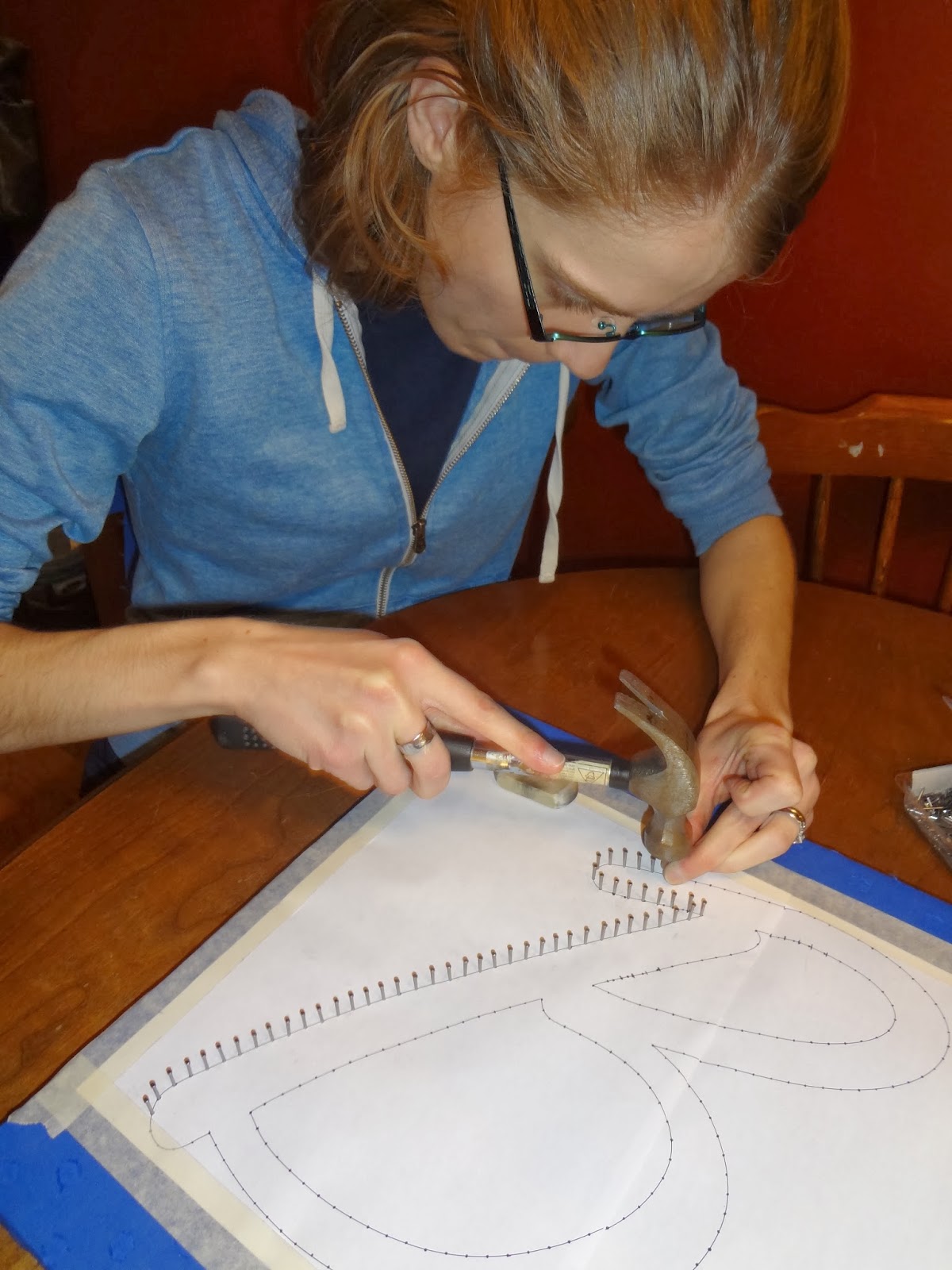 I used an eraser as a guide to know what height to make each nail, which did add some ease to the whole process. At least I didn't have to think too much about that part. 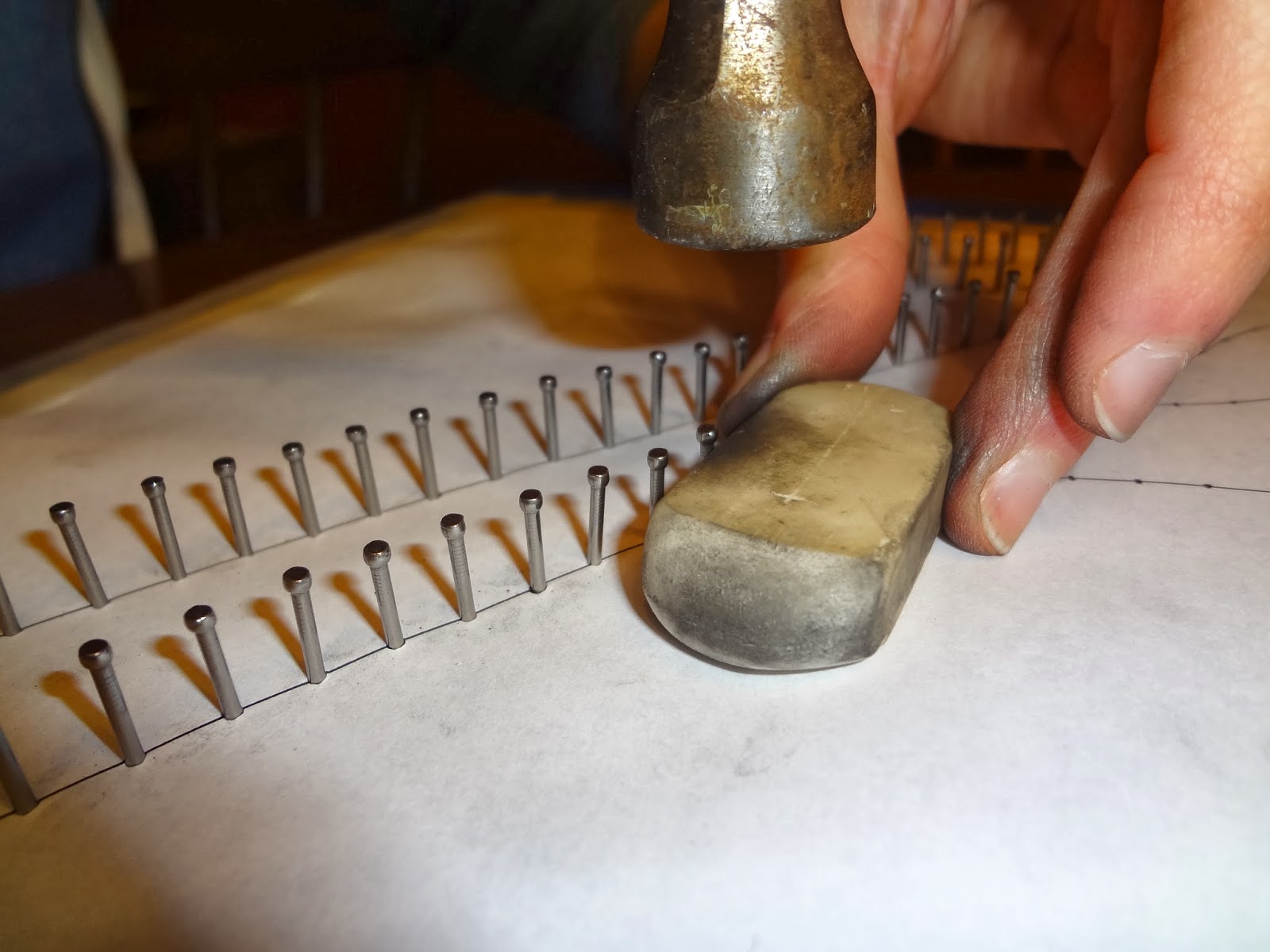 I made slow but steady progress through each letter. I took lots of breaks though, because tiny nails and a tiny hammer tend to cramp up the hands. And the nails left a nasty grime on my fingers. 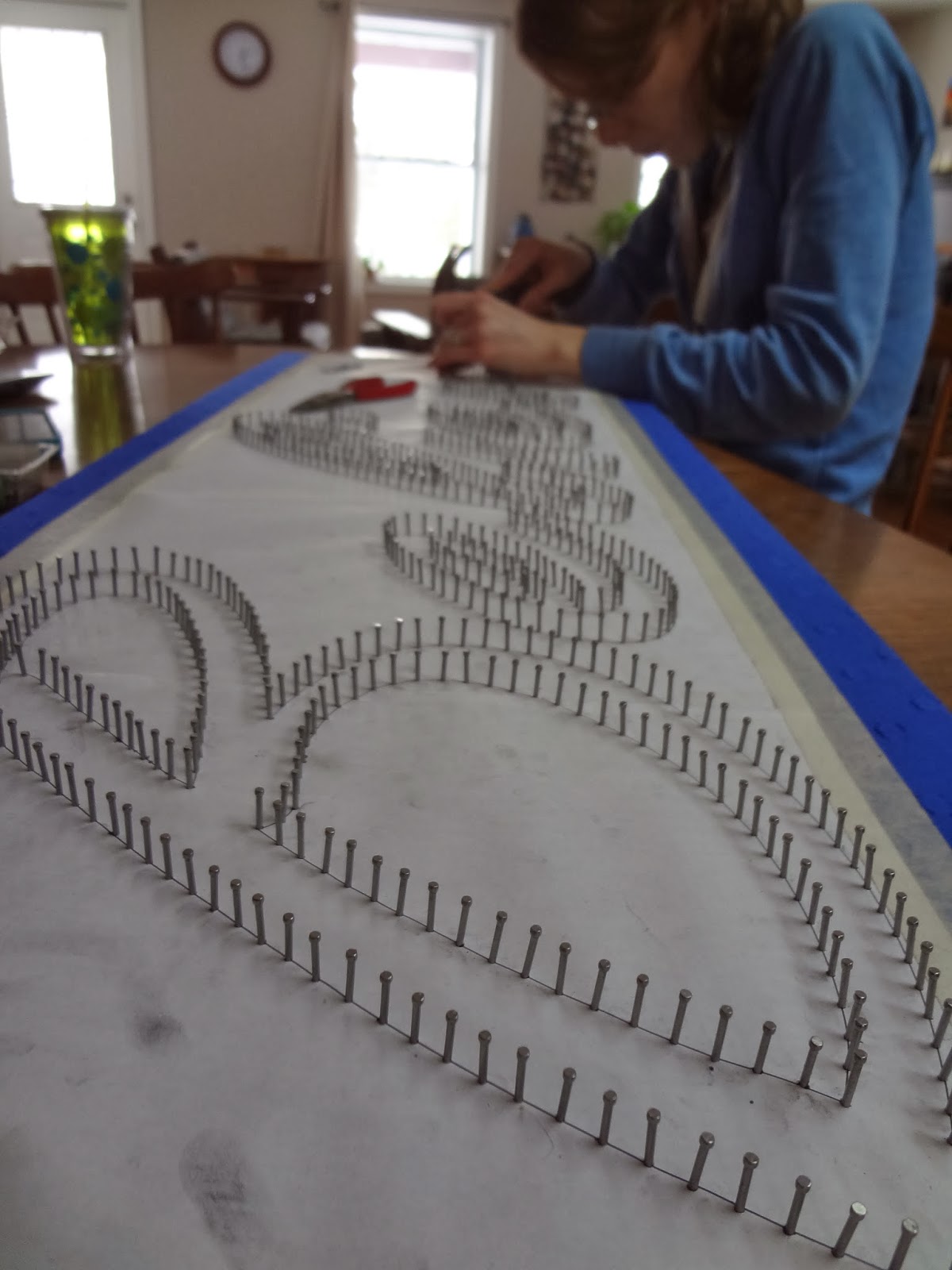 But I was determined to see this project through! Dan did end up helping with some of the nailing by doing the 'v' for me, but I did all the rest. Are you impressed? I sure am!

I finally finished the nails and was feeling pretty proud of myself. 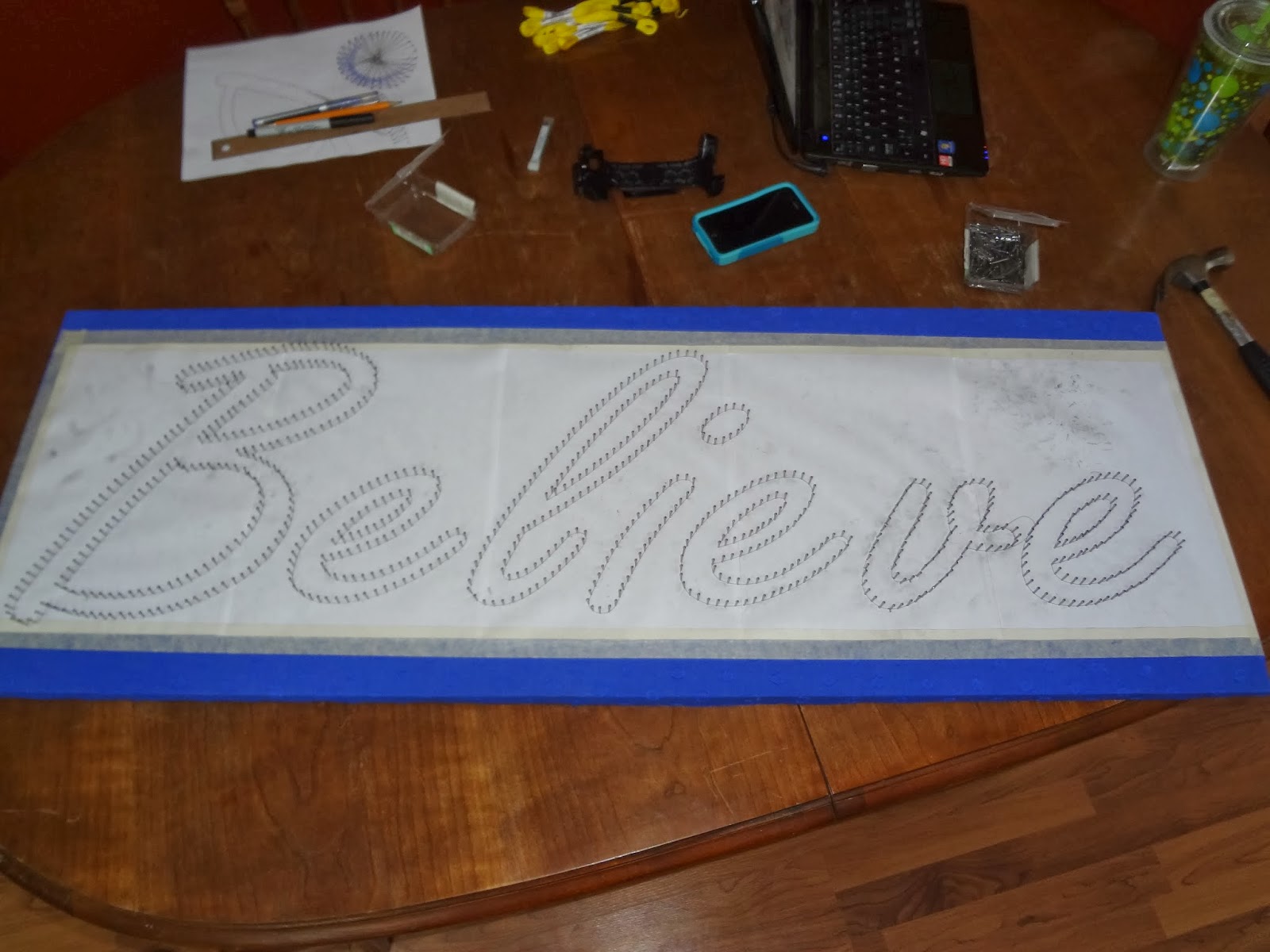 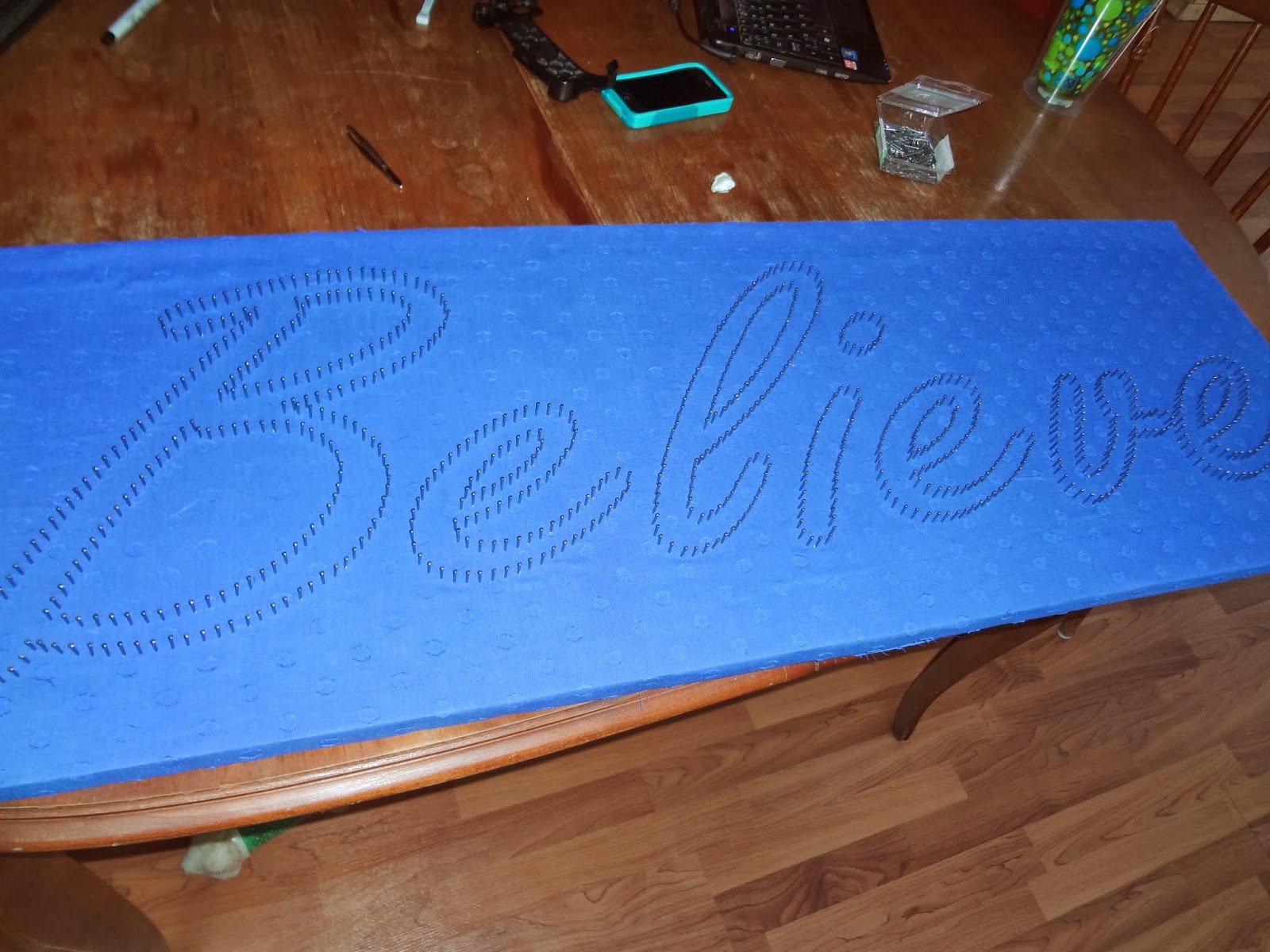 Once all the nails were in, we pulled off the paper and were left with a nice outline of 'Believe' on a pretty blue background.

Next up, the string! This part took longer than I thought it would too, since it was trial and error. I basically just wound it around and if it looked good left it and if it looked bad, backed up and tried again. It was also frustrating because you needed to keep a good tension on the thread or else it started unwinding all your work. 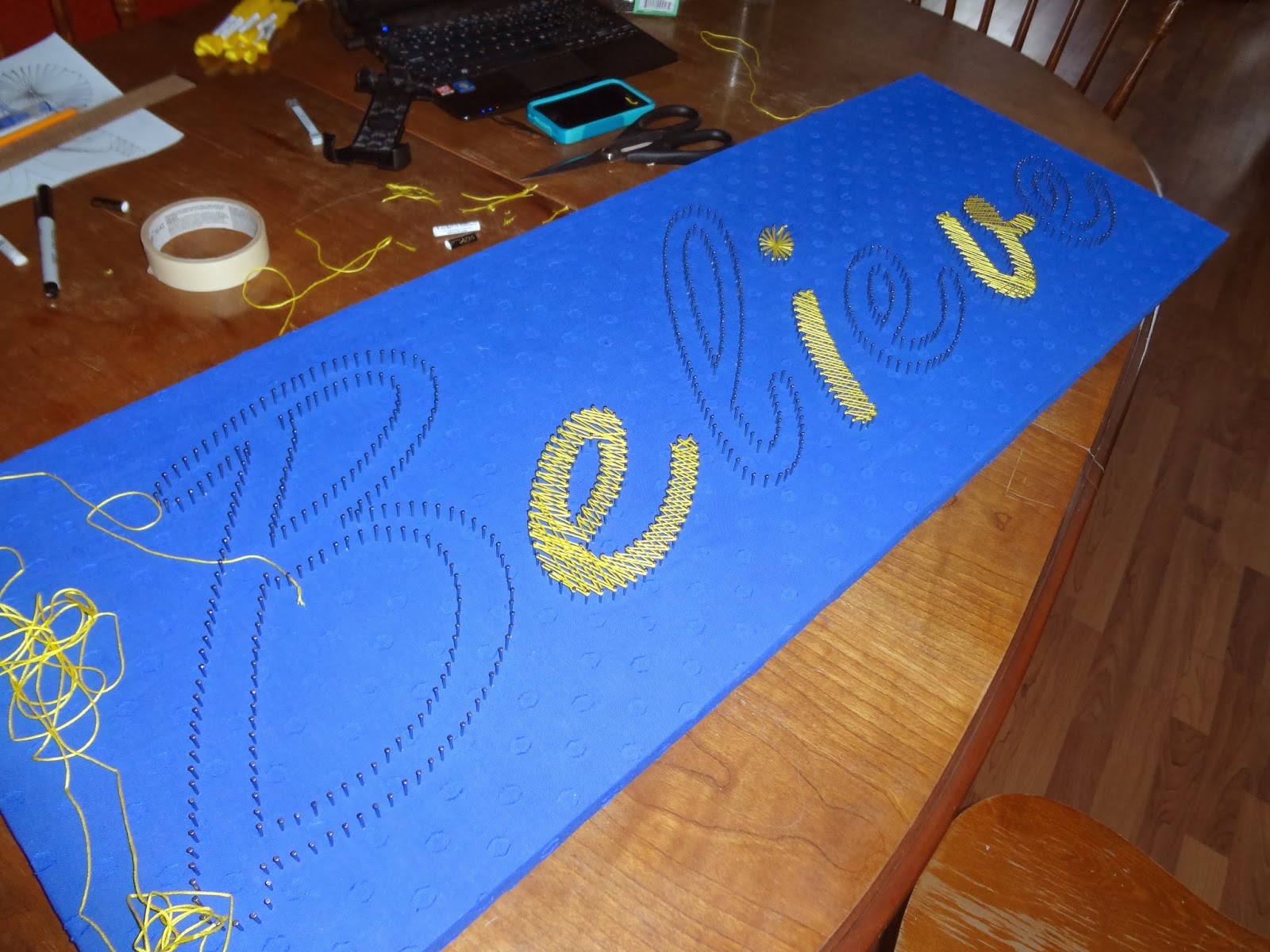 It was slow going and took me another day or two but by the end, I was feeling pretty good about myself. I think this is probably one of the hardest DIY projects I've attempted and done mostly on my own. 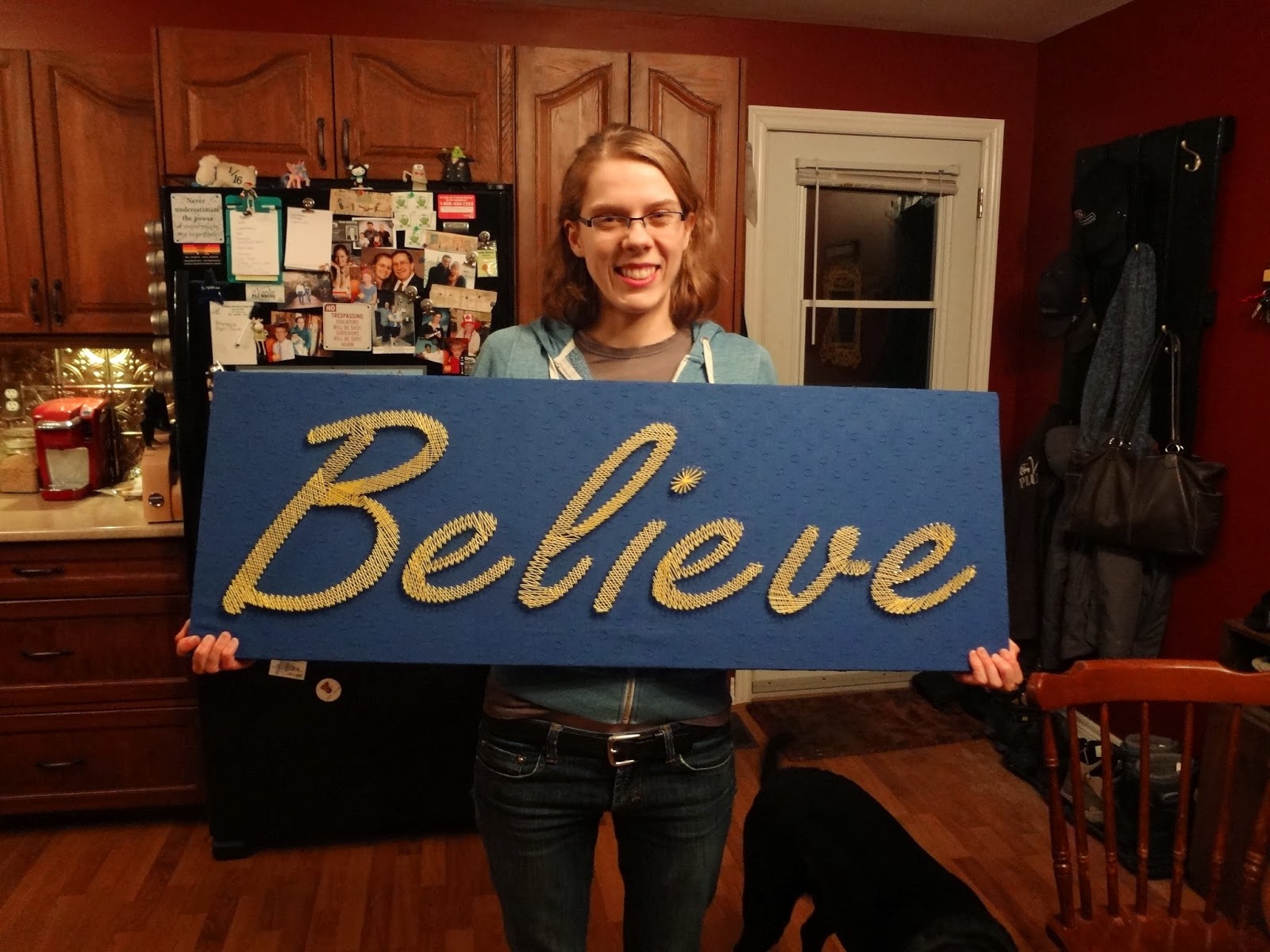 Super proud of myself. But wouldn't you be too, if you had just made that?

We hung it in our bedroom on the big empty white wall that has been bugging me for two years now. I'm really glad that something is there now. 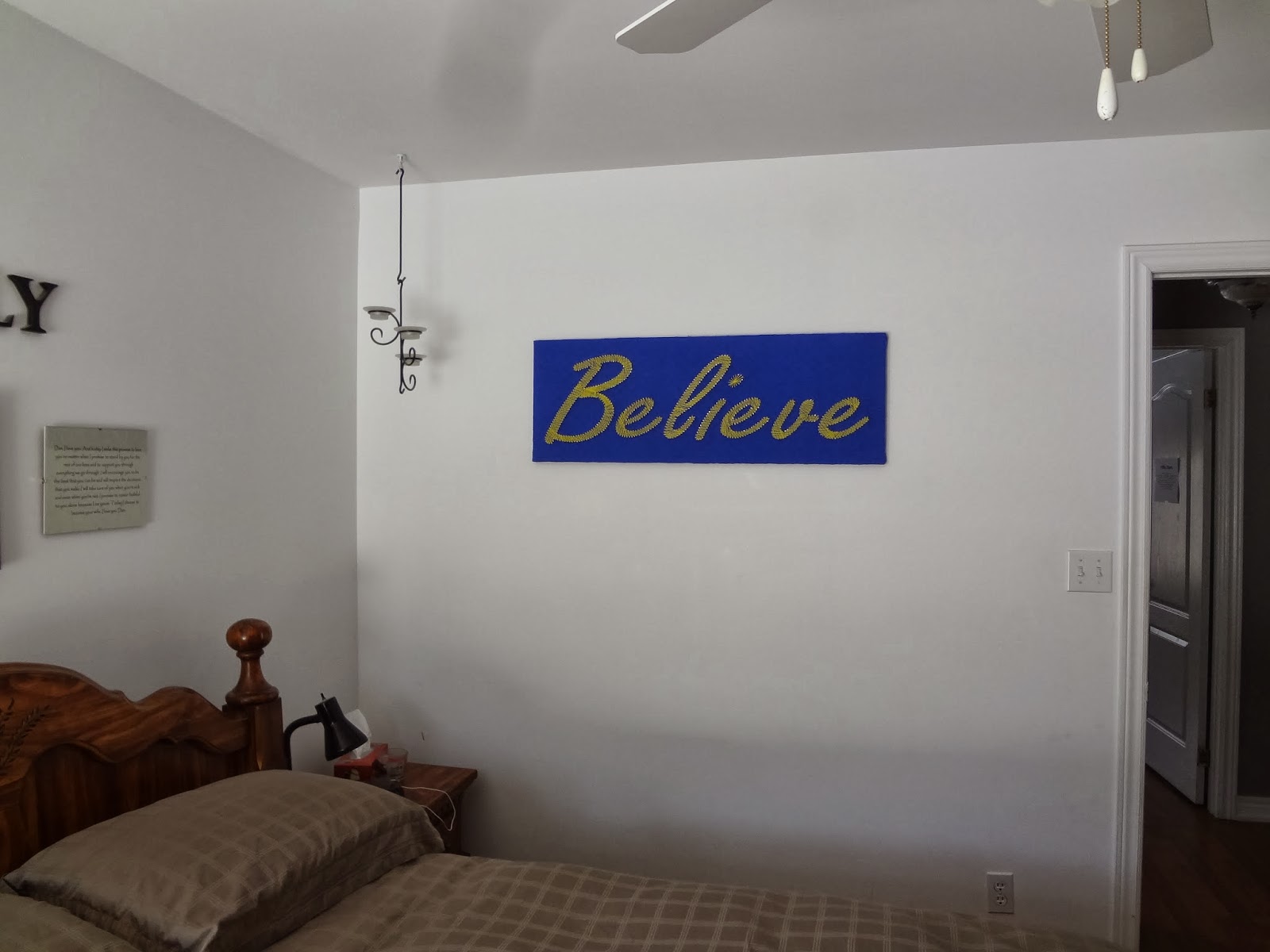 I also like that it adds some colour to an otherwise neutral room. 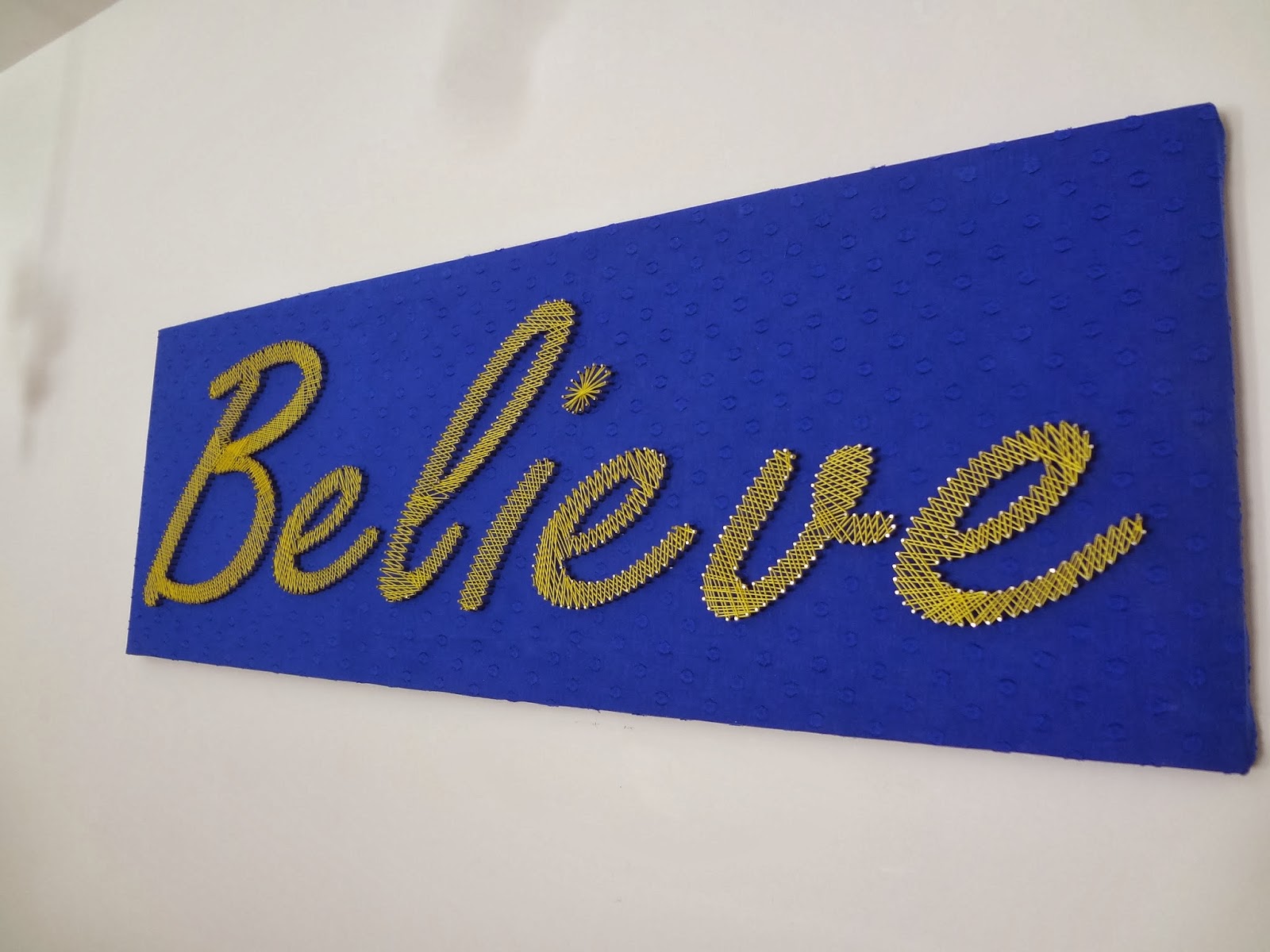 I just keep smiling as I write this post, because the finished product really is beautiful. Something about string art, it just looks so cool. 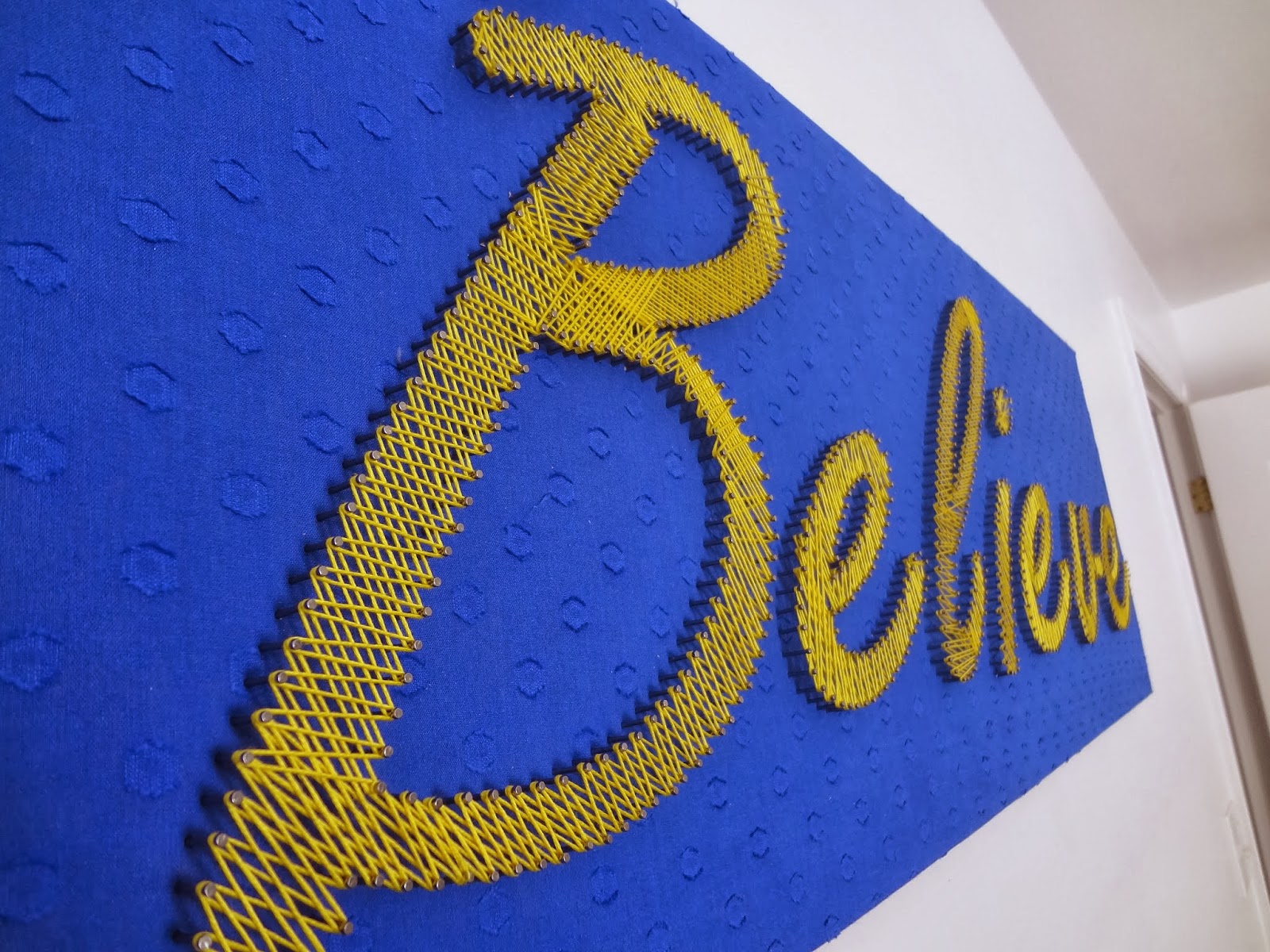 I also really love the fabric we chose. The subtle polka dots add to it but don't overwhelm it, which is exactly what I was going for.

As a final word, I'd like to say that string art is a ton of work and isn't for the faint of heart. But if you are determined enough, you will totally be able to do it. If I could stick with a project like this, so can you. Just remember that at some point during the process, you'll question yourself as to why you ever thought it was a good idea.

Anyone else ever done string art? Or is it on your to-do list? Or do you really think I am insane for ever wanting to do it?
Posted by Jenn0021 at Thursday, February 13, 2014