Enough With the Blood Draws Already

As you may remember, I blogged about my vampire appointment back in January where they took 18 vials of blood and I very nearly passed out. I also gave you some information on our fertility testing, telling you that they were doing blood work and an SHG (sonohysterogram).

Well I am back today to give you an update on how things are going. First of all, they took all that blood back in January to run tests to figure out why we keep losing pregnancies. Honestly, I can't even tell you what they are testing for because I can't pronounce, let alone understand, all the tests. They gave us a sheet of paper explaining what they were doing and I was like, this must be important, I'll file it.

In the beginning of February I went in for the SHG. I was lucky enough that my OB/GYN could perform the test so I didn't need to drive back to Toronto for it. According to him, everything in my uterus and fallopian tubes looks good, so that's a relief. I was really worried that I would have scar tissue from my D&C's so it was nice to hear that everything looked pretty.

The next set of tests were scheduled for Monday and Tuesday of this week, more blood draws. I needed to check my progesterone levels on days 23 and 24 of my cycle, as well as Dan and I both getting karotyping done.

I went alone on Monday and all went well. They only took four vials which seemed like a piece of cake compared to the last time. But the nurse somehow botched the job and gave me a bruise on my arm, not only where the needle went in. I've had bruises before so that wasn't too big of a deal but the part that really annoyed me was that my whole arm ached. Seriously, I didn't know my arm could hurt so badly just from a blood draw.

Going back to repeat blood work sucks. I was terrified to go back in on Tuesday since my one good arm was bruised and sore and my other arm never has any veins in it worth poking. But I put on my brave face and went. 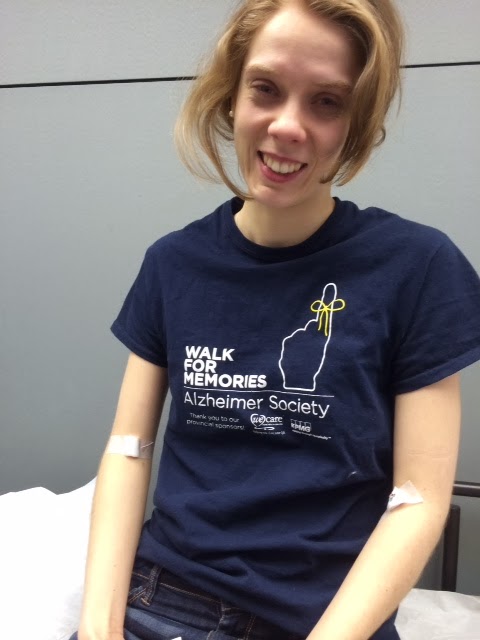 The brave face didn't last that long. As you can see in the above picture, I left there with both arms having been pricked.

After fishing around in my right arm (the bruised one) with the needle, the first nurse gave up. I started crying and being all dramatic so she called in another nurse. The new nurse is my favourite person of the week. She was super sympathetic and kind, distracting me with conversation and using a butterfly needle to finally get the blood she needed. She also totally gave me a sticker. 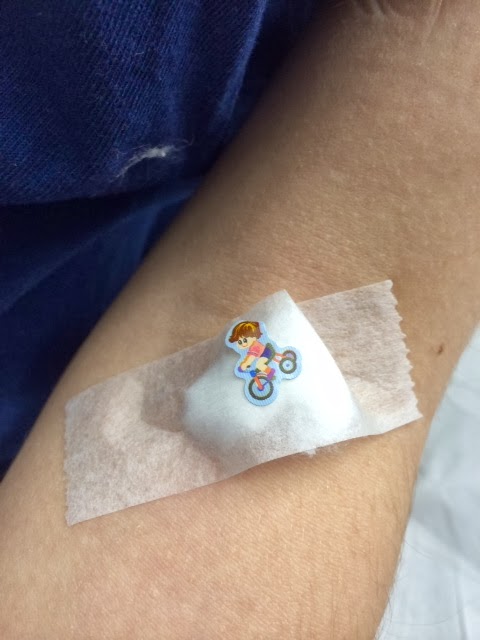 Yup, I'm that cool. I've never been given a sticker after a blood draw before.

Oh and just for the record, this is the vial count for Dan and I over the last month.

Who do you think is winning?

So that's its for testing for us. For now at least. We go back to the specialist on March 24th where we are hoping to get the results for all this testing and a plan in place. I'll be updating you after that appointment and let you know where we're at.
Posted by Jenn0021 at Wednesday, February 26, 2014