Last year I took part in a challenge called Fab Ab February (although I did mine in March) and I loved how it made me feel and look by the end. I mean seriously, I looked good. 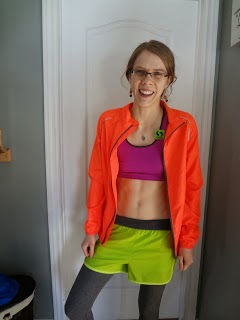 The only problem was, as soon as I finished the whole month of challenges, I didn't do another sit up for almost a year. Sad right?

But don't worry, I'm back this year to get myself some fab abs again! I'm even doing it in February this year and I have recruited Dan to do it with me. But he's attempting to do double what I do each day, since he's a man and I'm just a girl. That's his explanation at least. 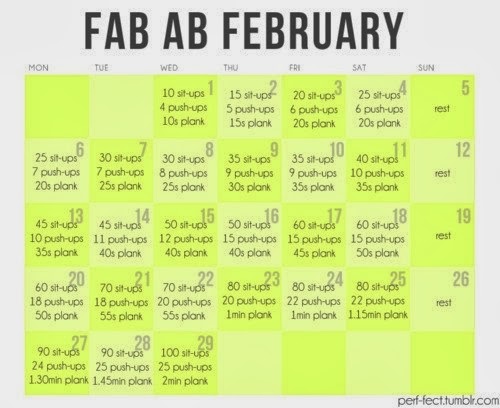 By the beginning of March, we are both going to be so ripped. Or maybe just Dan.

I've decided that if I'm not going to be pregnant and have an awesome baby bump, then I am going to rock my non-pregnant body and make the best of it.

We are currently on Day 5 and I'm already feeling the soreness. The last couple of days it has hurt to laugh, sneeze, move or basically do anything that involves my stomach muscles. But I know from experience that this extreme soreness will only last a few more days and then I'll feel almost normal again.

So while all other forms of exercise or physical exertion is basically nil, I am working on my abs. I just can't seem to keep up with any of my great goals come winter time. But after February is over, I'll have to find something else to occupy me during March since I'll be starting to run again in April! I am determined to at least try and run another 5k this year.

Anyone else doing any form of exercise lately? Anyone else working on a particular body part? Please share!
Posted by Jenn0021 at Wednesday, February 05, 2014