Today I'm here to be honest with you. I don't want you thinking that I'm always perfect, am housewife extraordinaire and meet all my goals. Because I don't. Especially when it comes to exercising.

Seriously, I'm not sure what's wrong with me and my lack of ability to stick with some sort of workout. Remember back at the beginning of February when I told you all I was doing the Fab Ab Challenge again? If you need a refresher, click here.

It's supposed to take a month to complete. As in, I was supposed to be done it by the end of February if I had stuck to it 100%. But things came up and we got behind and we are only on day 22, even though we're almost halfway through March now. At least we're still chugging along with it though. Right? I am determined to finish it by the end of March at least, so you should be expecting another report about it before the month is up.

In other news, I attended my very first Zumba class last week! I've been meaning to go to Zumba for over a year now and finally got up the guts to actually do it. I just did a drop in class and have decided I need to work on my endurance before joining full time. Zumba is hard! I was pretty sure I was going to die after the first song. Not to mention, I looked stupid the whole time. I kept thinking of this image that has been floating around the web. 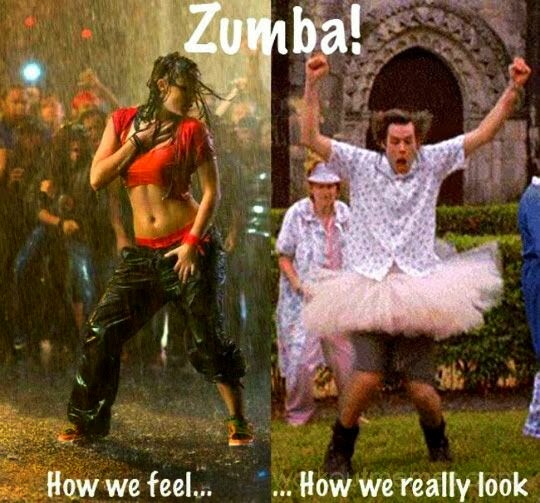 Seriously, I am not a natural when it comes to dance moves. At all. But it was fun and I might even join my friend Vicky when she signs up for it again next year. Now that girl has the moves!

So that's my little update on exercising. And since it wasn't all that awesome, I'm going to tell you my incredible news regarding my weight. As of Monday, I weighed 115lbs! While I am aware that it was probably a fluke and I will be back down again next week, I am glorying in it this week. That is my first target weight and it would be amazing if I could just hold steady there for a bit. So fingers crossed that I might keep some of that weight on and continue working my way up to a normal BMI again.

Anyone else working out lately? Have you ever tried Zumba? What's your favourite form of exercise?
Posted by Jenn0021 at Wednesday, March 12, 2014