Last weekend, my friend Vicky and I went to Toronto for a girls weekend. Since both of our birthdays are coming up in less than a week, we thought we would celebrate early by heading off to a craft show and then grabbing a hotel for the night.

Unfortunately for you, I sucked at taking pictures. I forgot my camera and my iPhone is old and takes crappy pictures, so I wasn't as motivated to actually photograph things. But I did my best so that I could at least share some of the highlights of the trip.

We headed out on Saturday morning so that we could arrive at the One of a Kind show early. This show was so much fun! It's basically a big craft kind of show where people have booths full of whatever it is they make. They had lots of food samples that Vicky took advantage of and I drooled over, as well as a large variety of pottery, knitting, sewing, art, crafting, metal works, etc. It was huge though and quite crowded, so we struggled to take it all in.

I made two purchases which I am beyond delighted with. The first one was a cute button to add to my collection on my hippy purse. 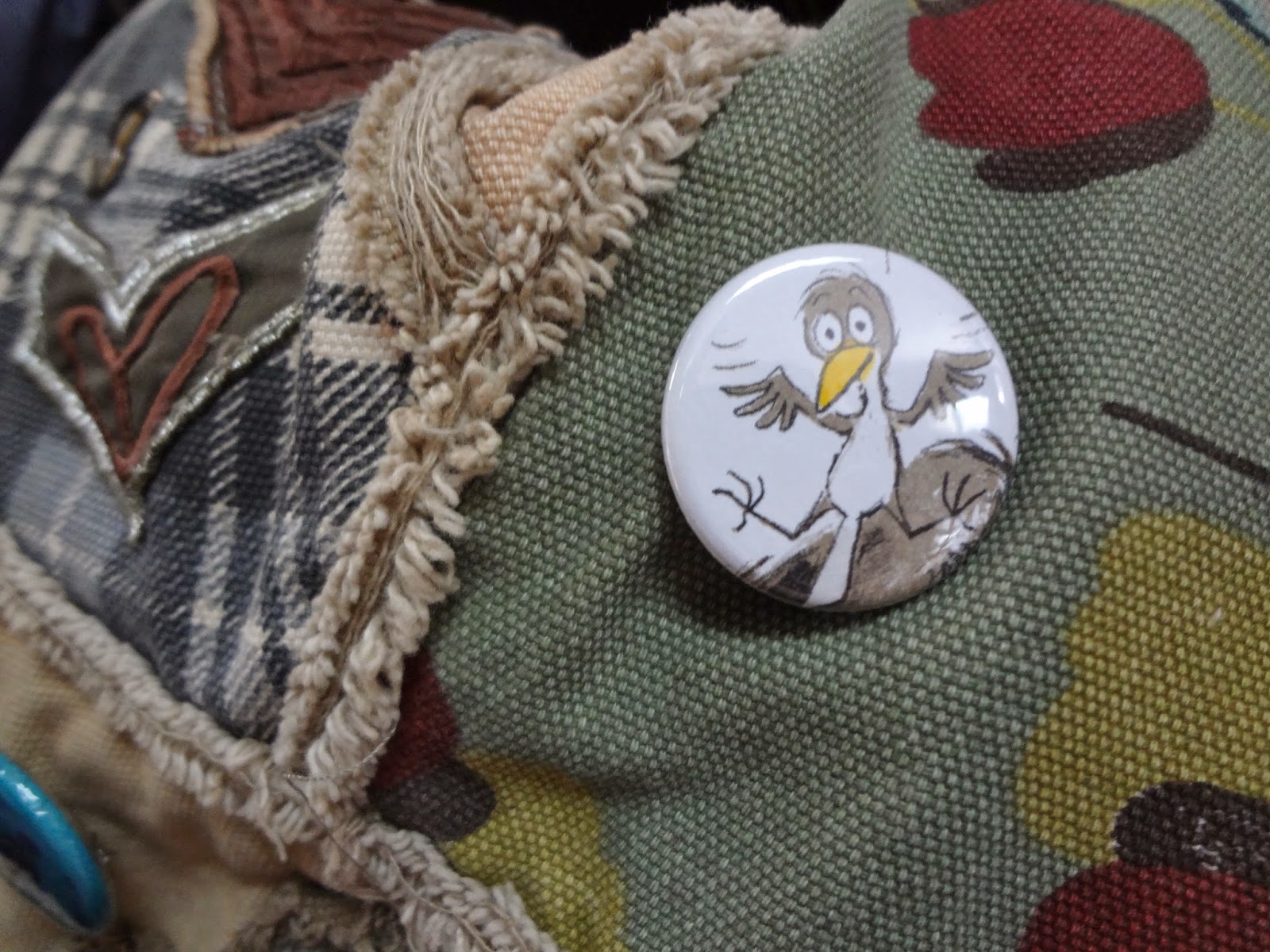 Isn't it adorable? They had a lot of different ones and it took me forever to choose. They took old pages from books and made them into pins. I should have bought more, they were that cool.

The next thing I purchased at the show was a new pottery bowl. I have been looking for the perfect cereal bowl for ages and finally found one! I LOVE the colours and it was totally affordable. This picture doesn't even begin to grasp the colours though. So I guess you'll just have to come visit me to see the real deal. Trust me though, it's gorgeous.

After we left the show, we headed over to our hotel. It was a super cute room, even if it was small. 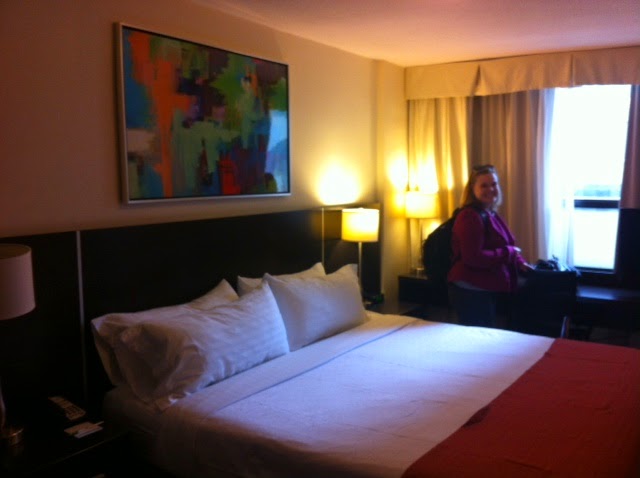 We opted to watch TV for a bit to rest up after walking so much at the One of a Kind show. Once we had rested for about an hour, we decided we should probably head out for some more shopping. We were right downtown so we walked down the street and hit up Forever 21 and H&M. 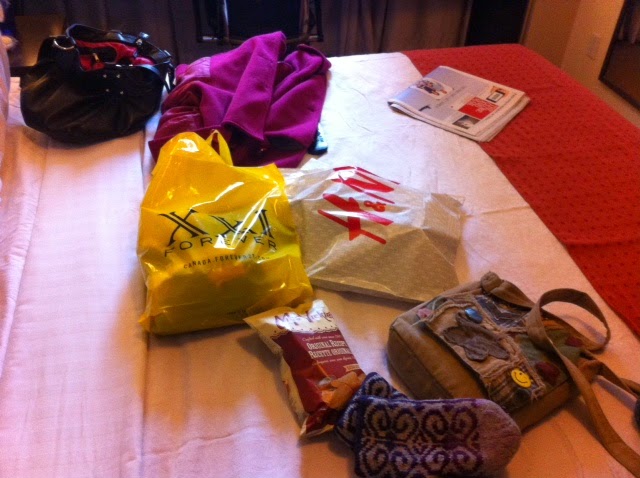 I bought some cute tank tops and t-shirts. Oh and a bag of Miss Vickie's chips. I scored awesome deals on the tops though, $2/camisole, $4/tank top and $5/t-shirt. Sweet deals, right?

We also saw a police horse when we were out walking. I tried to get a closer picture of it but couldn't find my phone in time. So you'll just have to squint and imagine the rest. 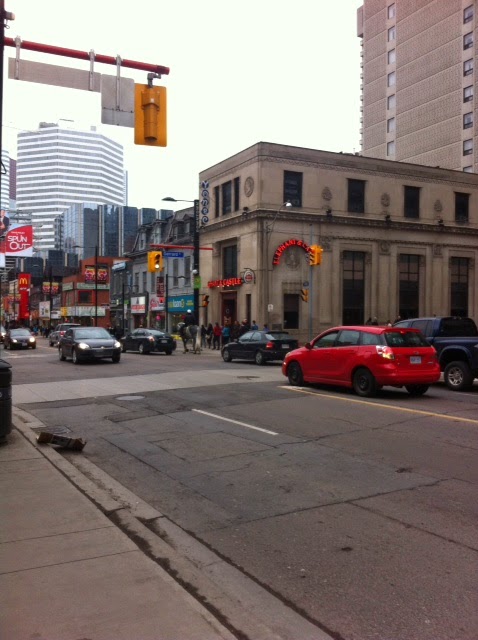 Haha! By squint I mean "try and find the horse"! Like I said, bad iPhone camera.

After our shopping spree, we headed out again for supper. We found a cute little restaurant called The Magic Oven that could cater to my food restrictions. So I actually got to eat something that wasn't just lettuce! I ordered the sausage and pepper penne and Vicky got a pizza. 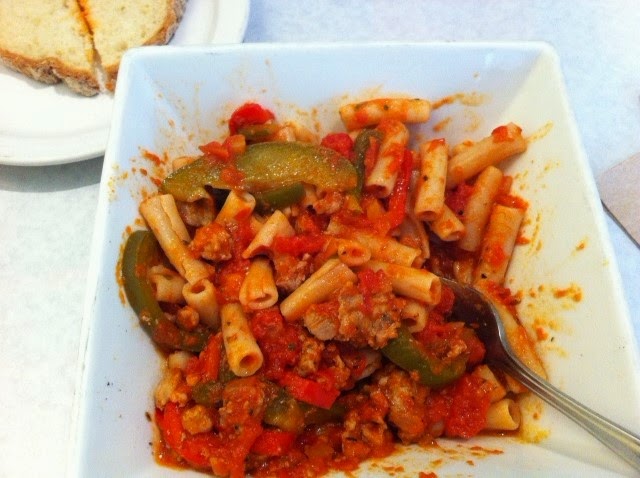 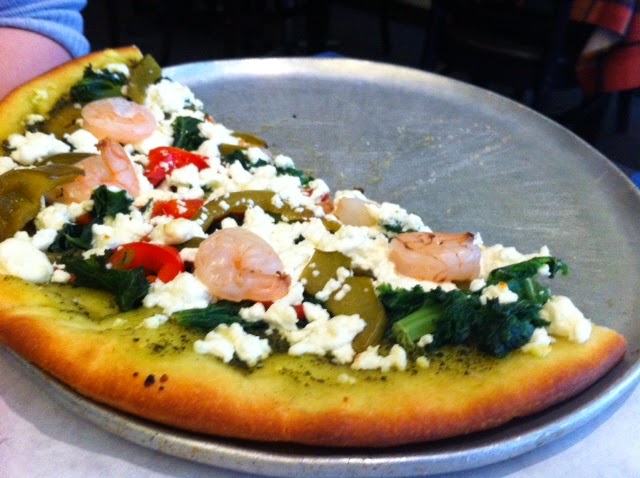 Yes, I forgot to take these pictures before we started eating. We were just too hungry.

After we enjoyed our dinner and packed up the leftovers, we headed back to the hotel room. We then got in our pj's and watched TV until bedtime. It was awesome to just relax and chat while watching mindless TV.

The next day we slept in, watched more TV and then headed home. It was a quick weekend but it was the perfect way to celebrate our birthdays. I'm pretty sure we should probably make this a yearly tradition. What do you think Vicky?

Oh and in case you were thinking that would be the end of my birthday talk, you're wrong! There will be more, just you wait!
Posted by Jenn0021 at Wednesday, April 02, 2014