Probably over a year ago now, I came across some pictures on Pinterest that gave me the idea to build Mia a raised food dish. I showed them to Dan and he assured me it was most definitely something that he was capable of doing (with my help of course). Fast forward many many months and here we are! 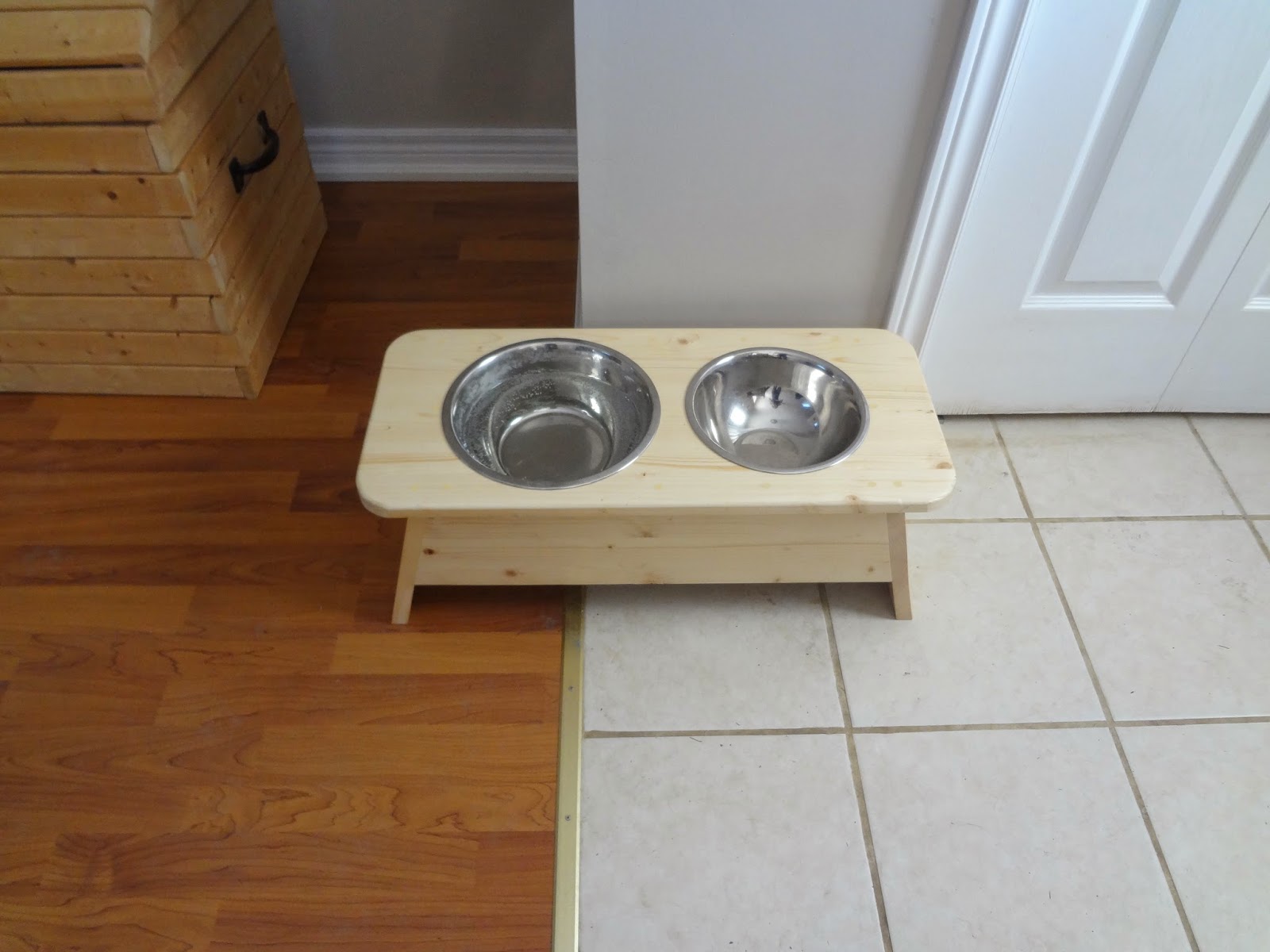 She used to have two old dishes that were gifted to us, one was plastic and the other metal. Except for the metal one got run over by Dan's truck last summer and the plastic one got half chewed when she was a puppy. She then graduated to an old ice cream container for water and the half mangled one for food. When we got the idea to make this new elevated tray, we found these two metal bowls at Sears. So for the last 6 months or so, she used these two bowls minus the nice stand.

Last weekend we finally buckled down and spent the afternoon in the garage making her a new dining room set. 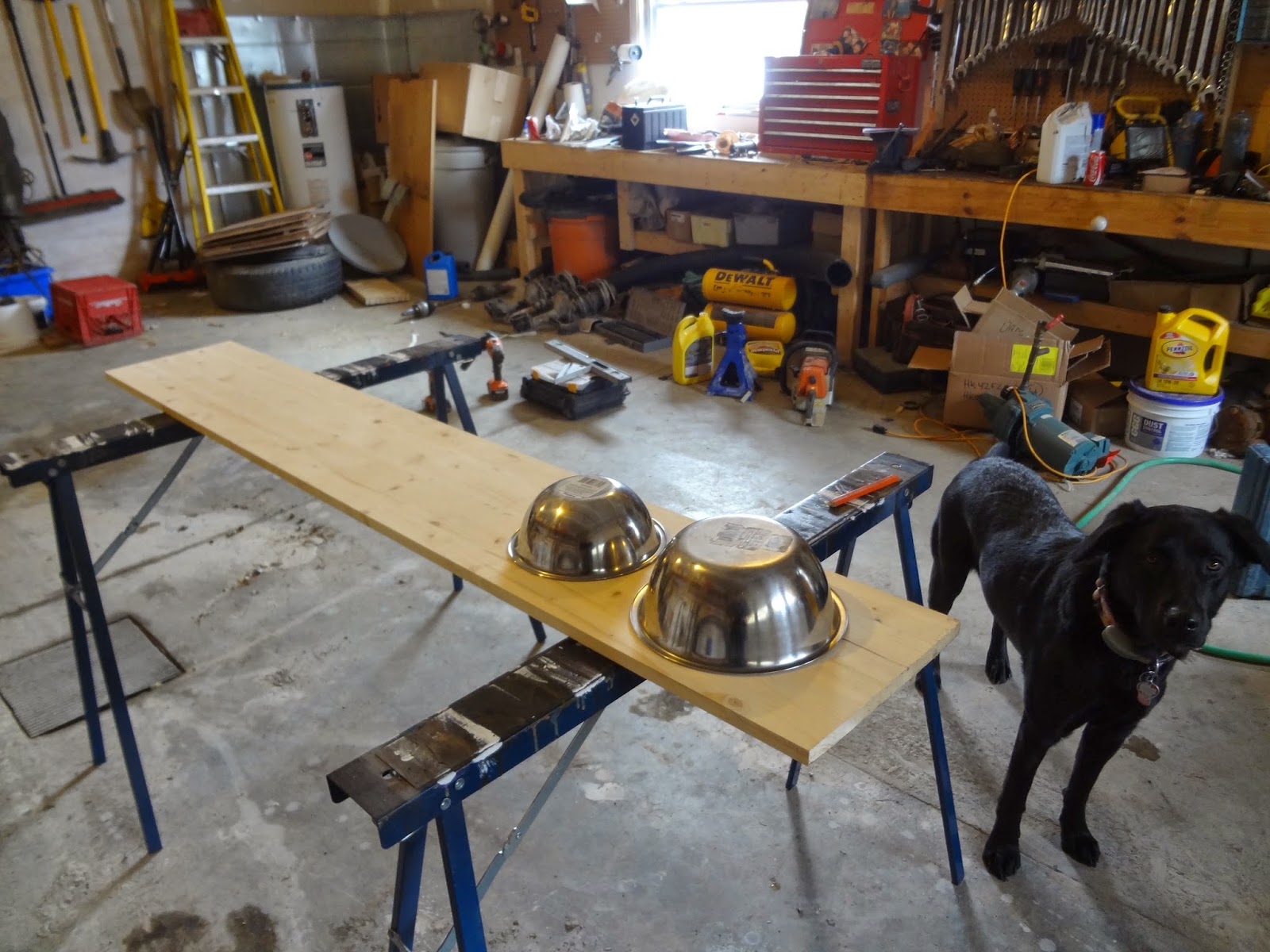 She helped of course. More like got in the way, sneaking under us to steal scrap pieces of wood and getting sawdust in her face. But she's cute so we let her stay for most of the time. Dan is the handy and smart one when it comes to building things, so I basically just stood back and occasionally held something for him or traced a pencil line. I like to tell myself that he couldn't have done it without me though. 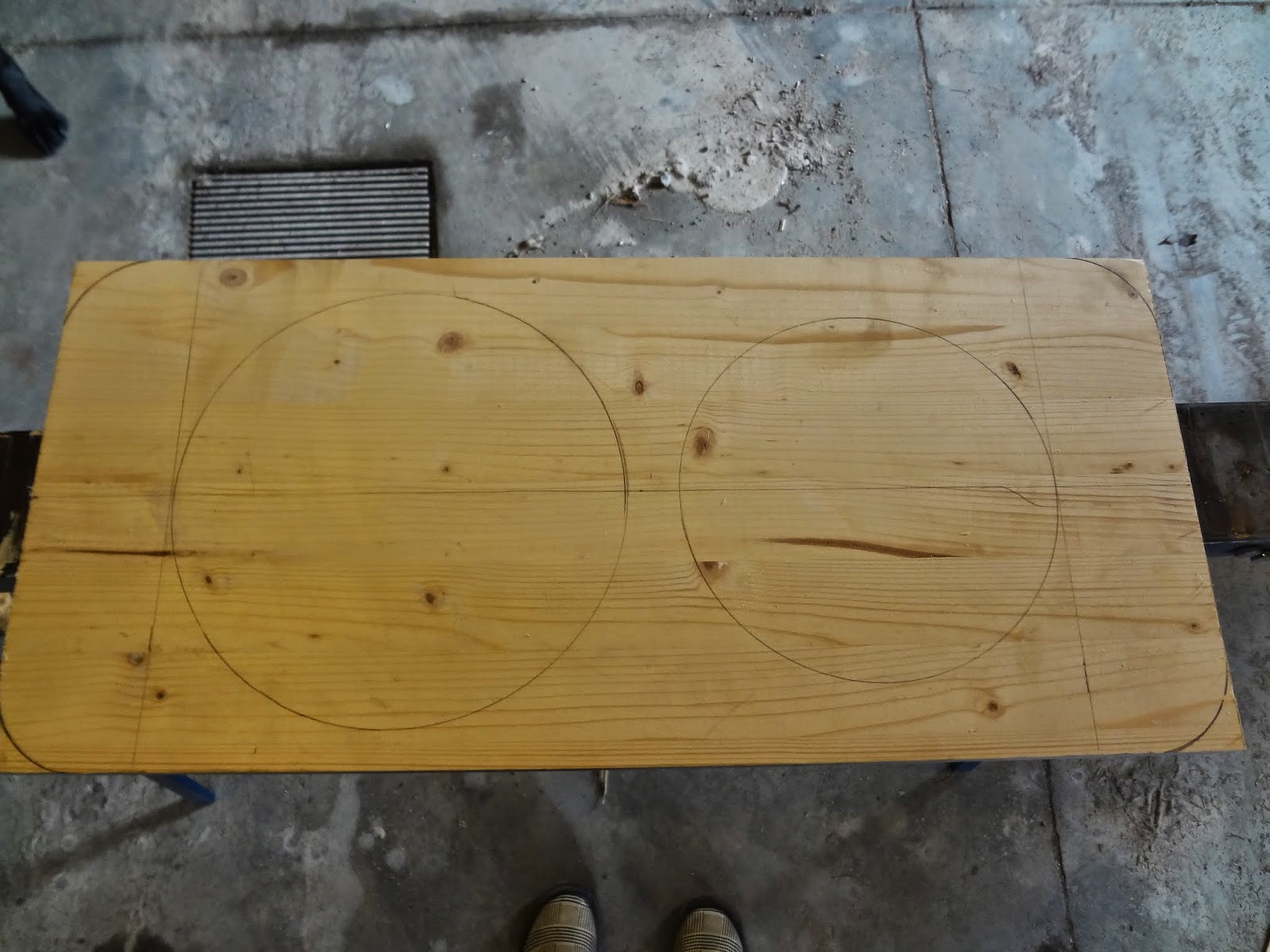 He measured and traced and leveled and all those other important things before moving onto the cutting stage. Seriously, he thought of so many things that never would have crossed my mind. I guess it's a good thing he was the brains behind the operation and not me! 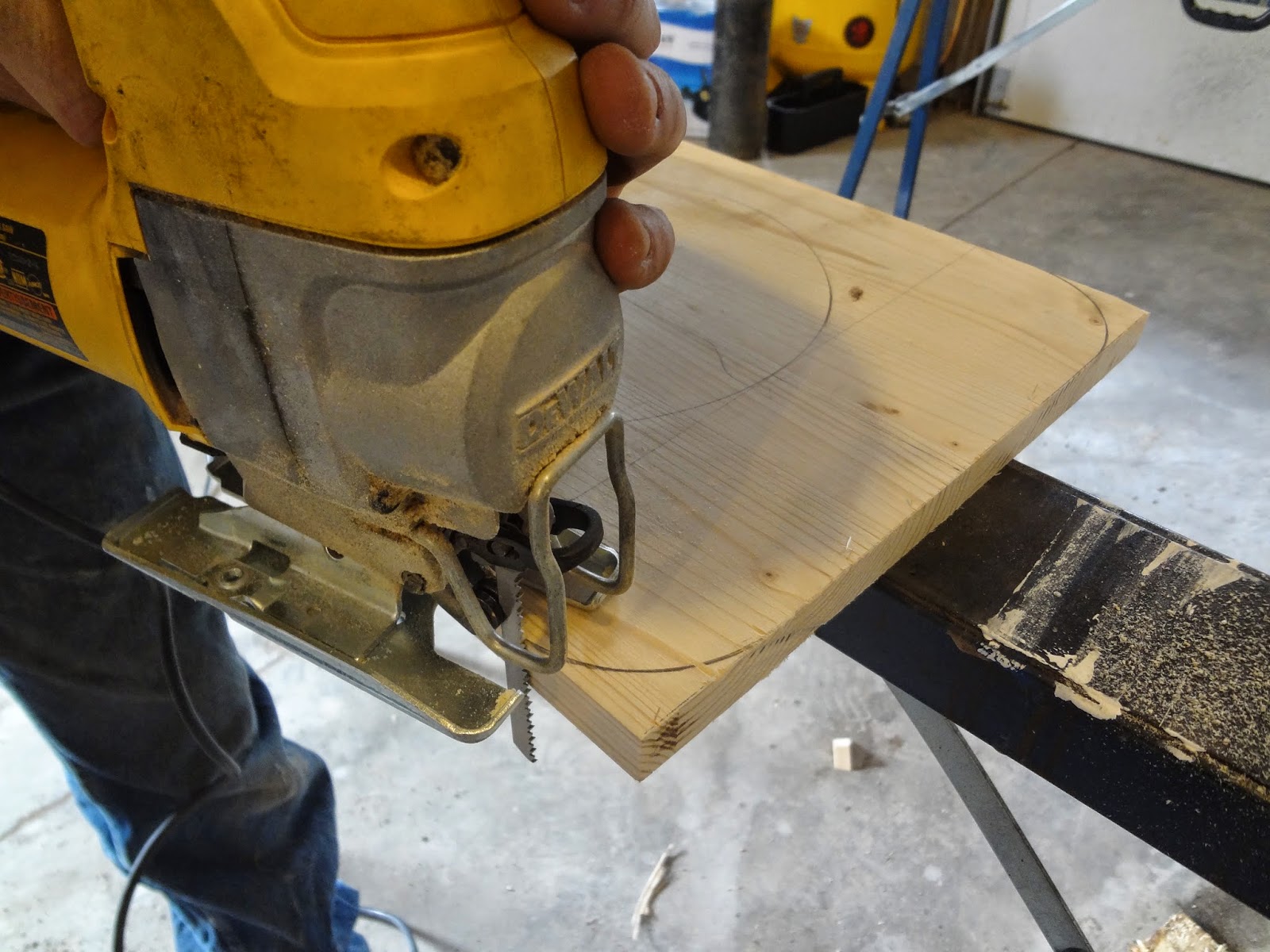 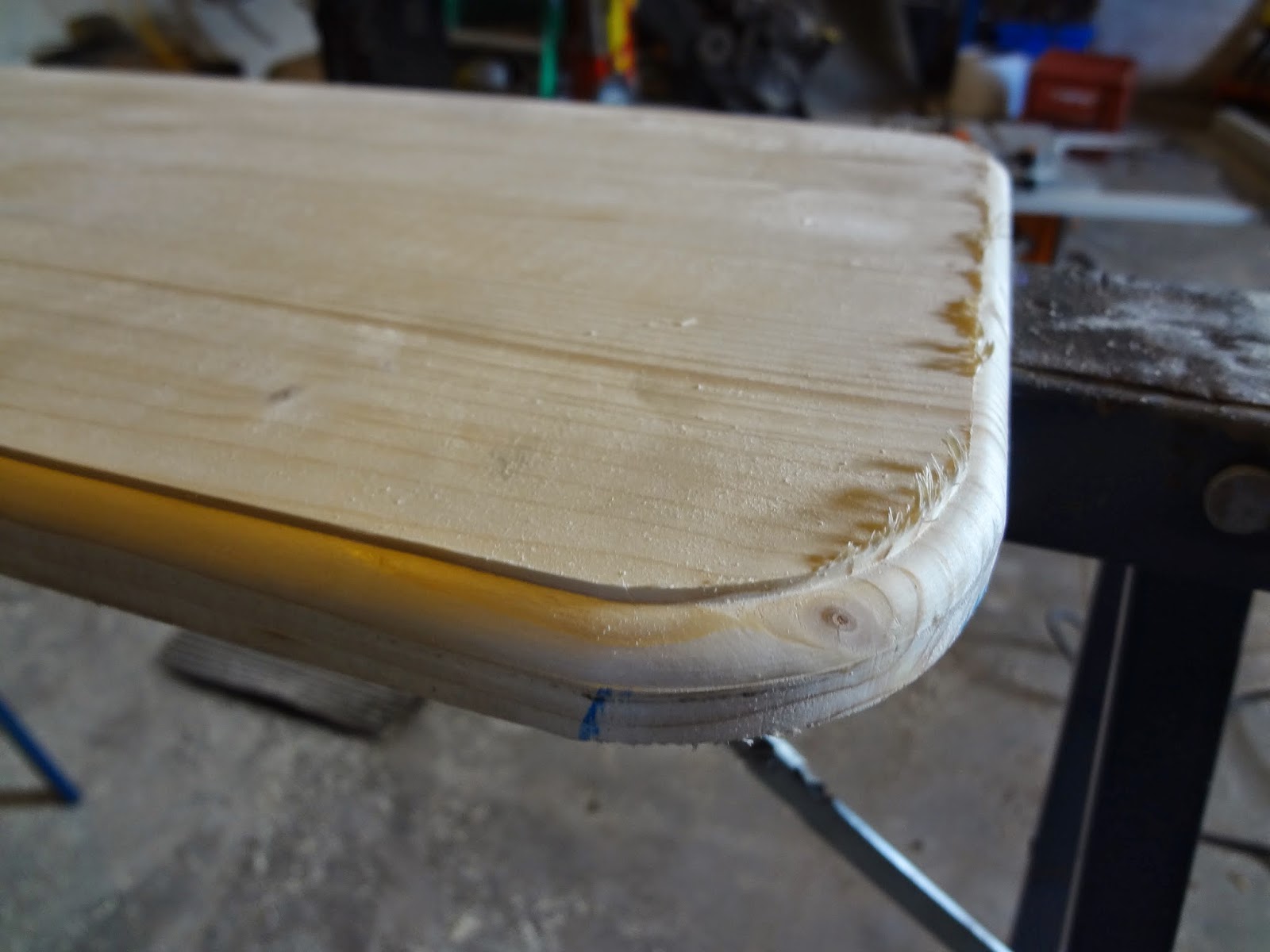 After cutting the corners using a jigsaw and then rounding the whole thing with a router, we were finally ready to cut the holes! He drilled a hole into the middle of each and then carefully cut out the center using the jigsaw again. Except for we cut the hole too big for the bowl. It's not like it slid right through or anything but it moved around too much and you could see a gap around the edges. This part was very sad, since we had to start all over again. 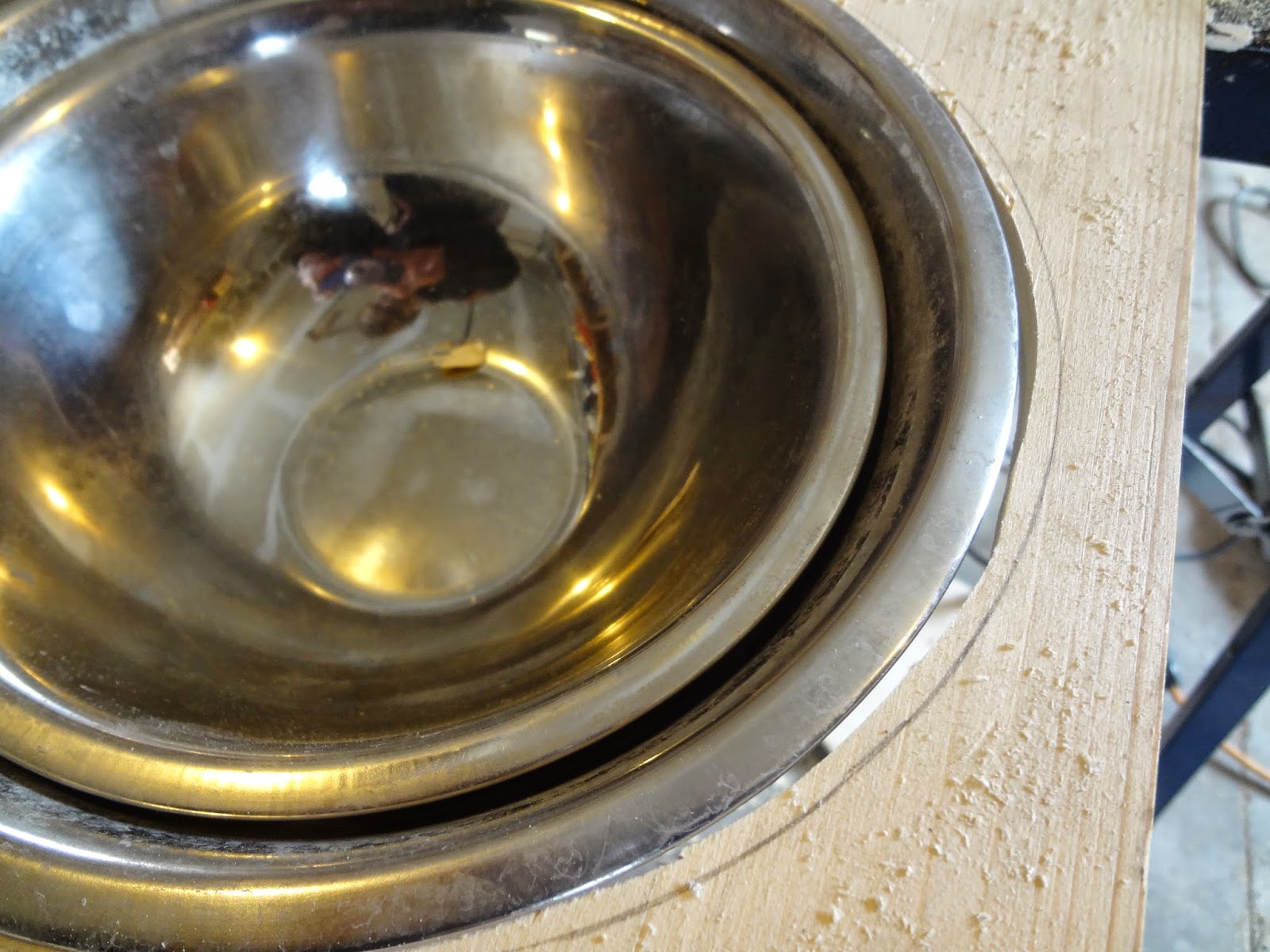 But Dan took it well and just picked up another piece of wood and started measuring again. At least it went faster since he knew what he was doing by this point. 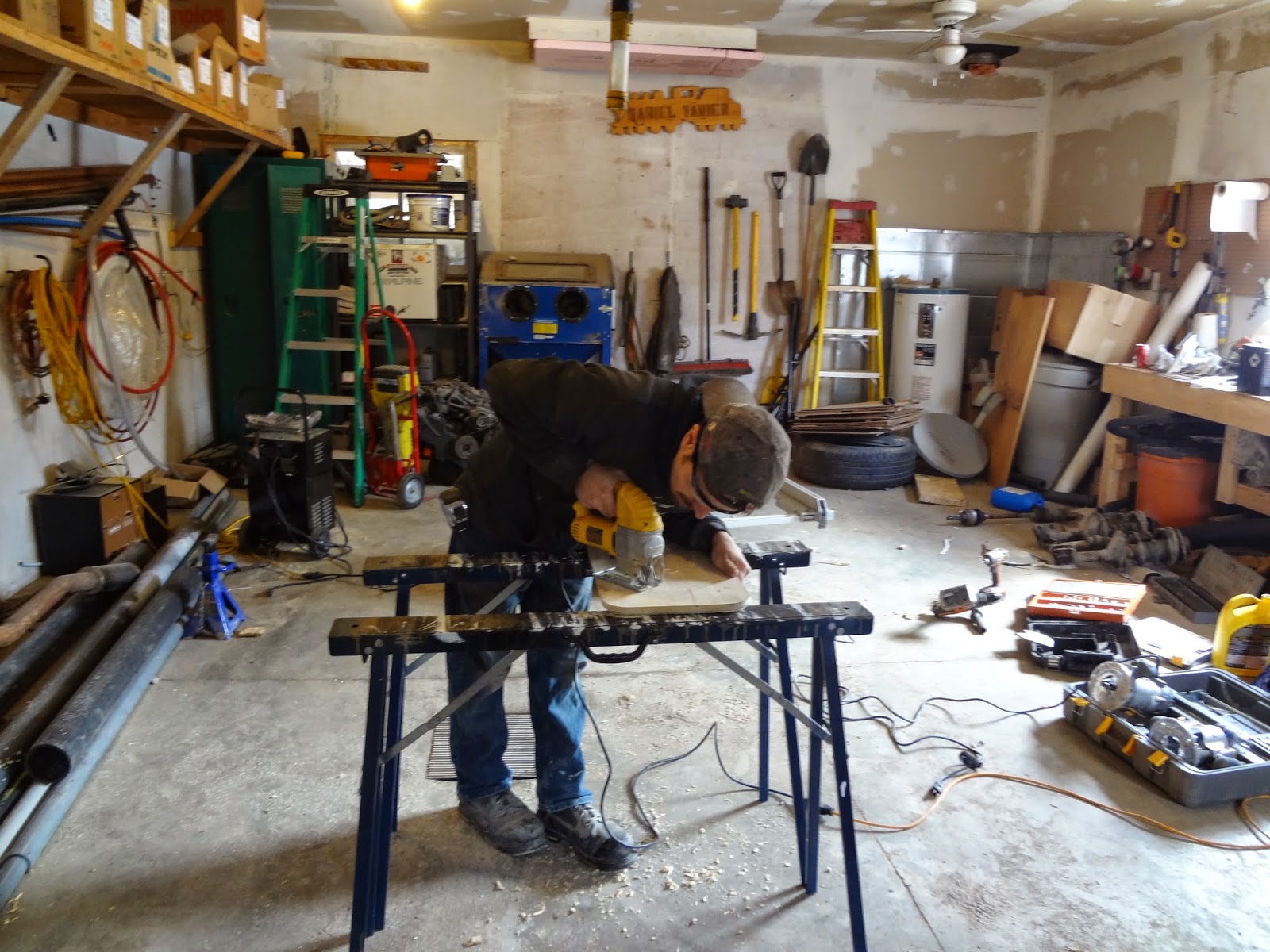 I just stood back out of the way and took pictures. Mia stood a little too close though and ended up looking a little dusty by the time Dan was done cutting. But the good news is, the bowl fit this time! It only took a little tweaking and shaving down of the sides. 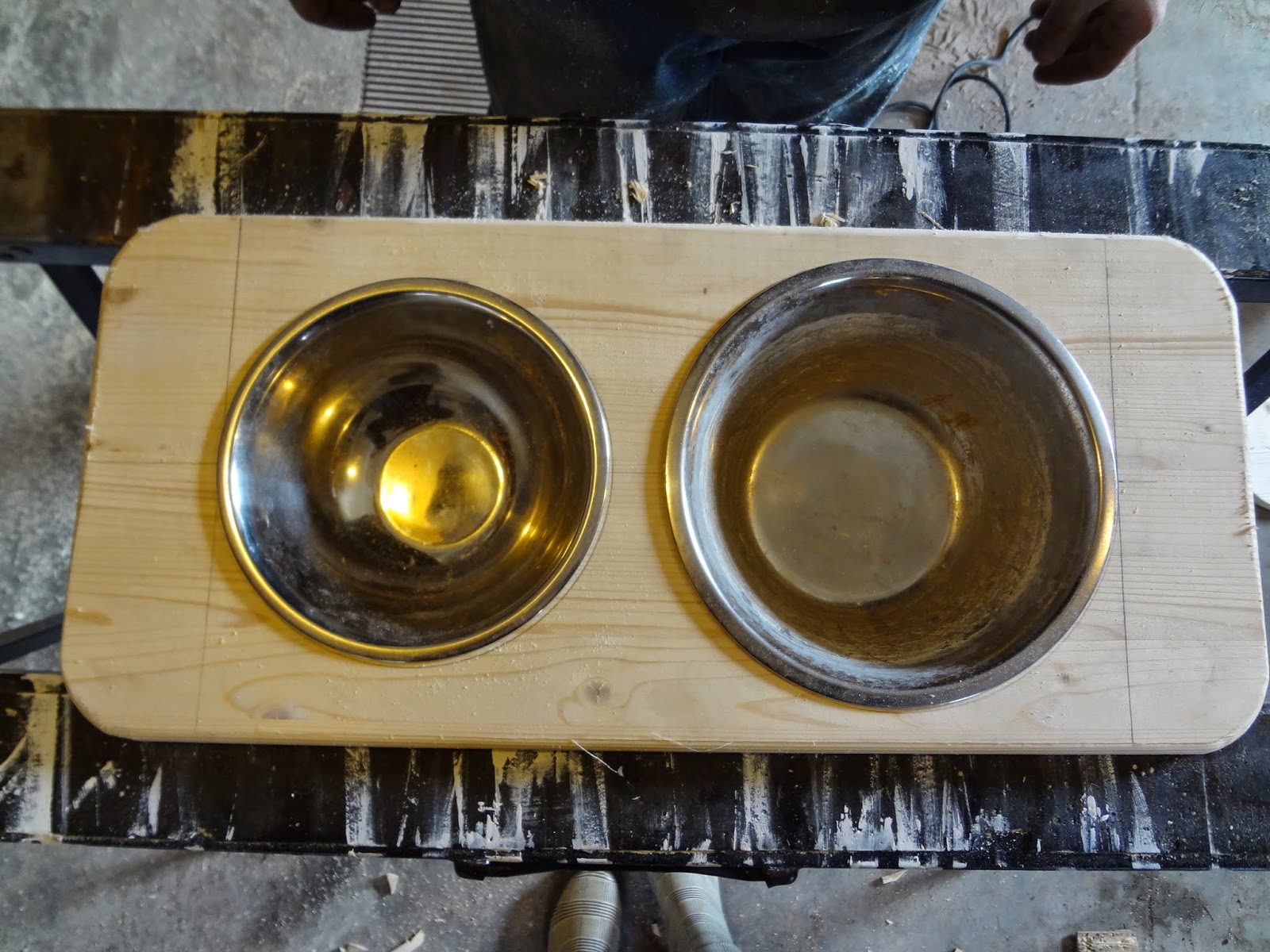 Once this part was done, we then got to building the sides. And when I say we, I really mean Dan. I did hold some things in place for measuring though... We screwed it all together and then tested it out on Mia. She liked it. 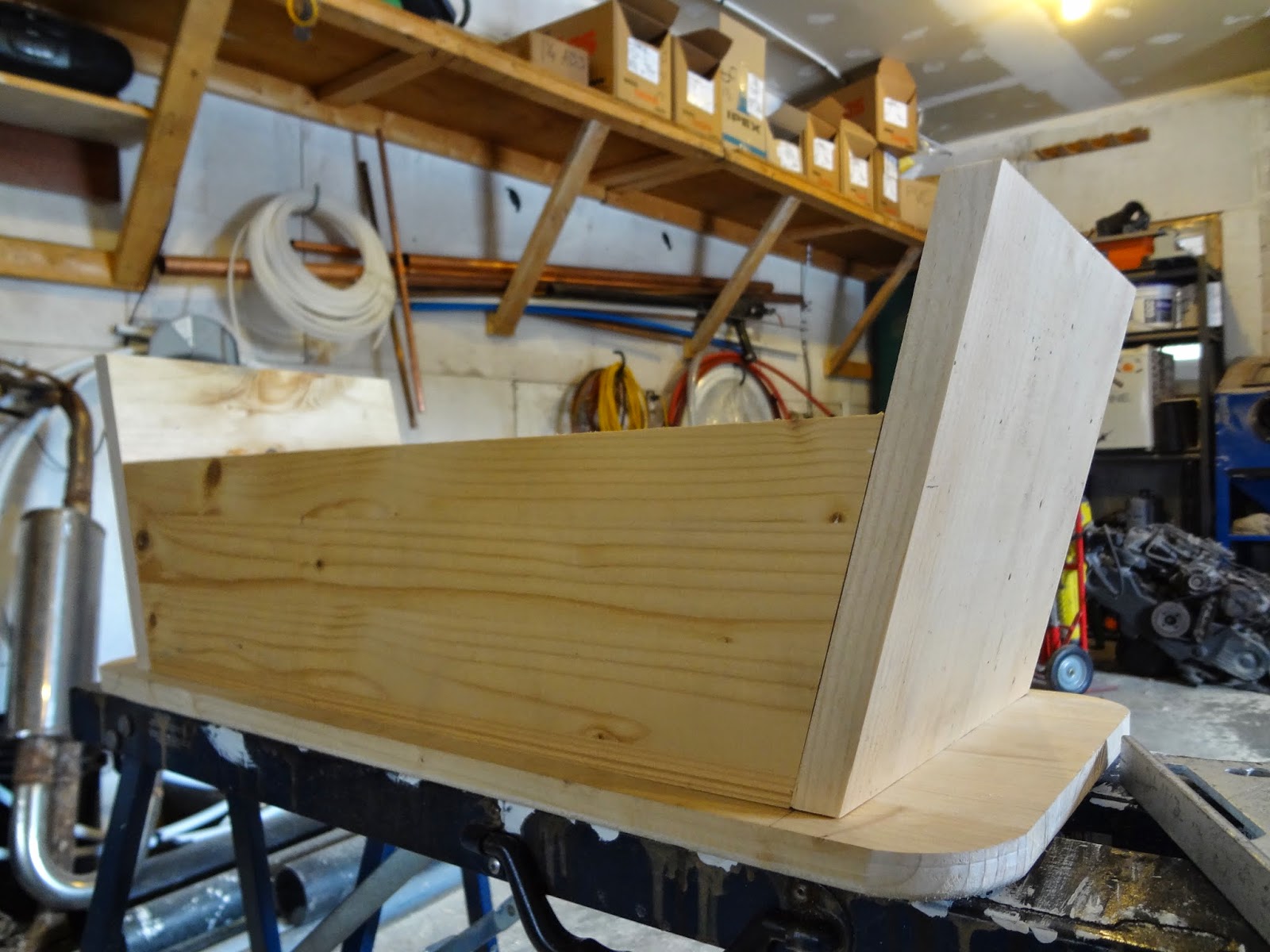 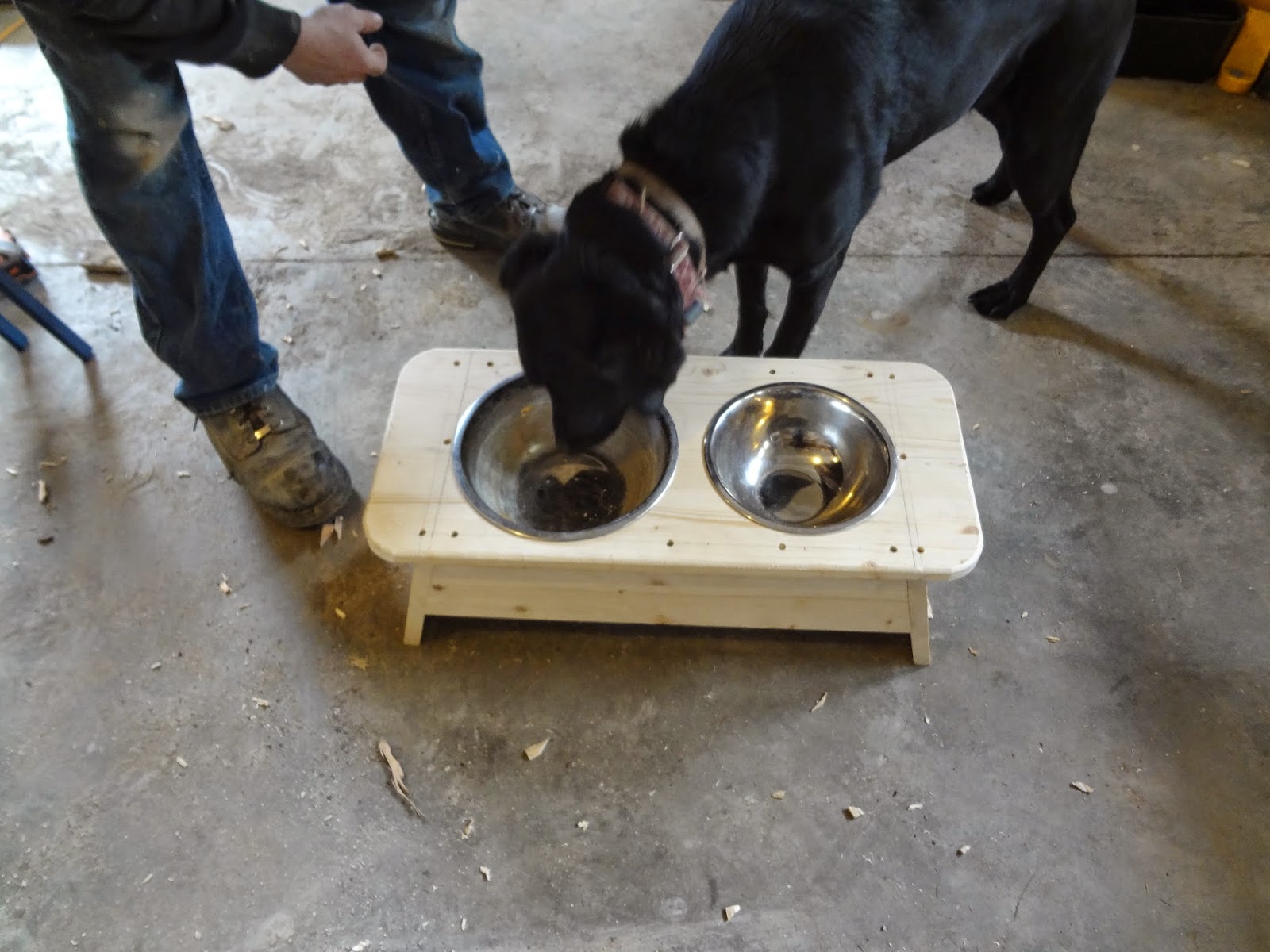 But then we had to take it back so we could fill the screw holes and then put a couple layers of clear coat on it to protect it from dog slobber and water spillage. You'll be happy to know I did this part all by myself. See, I totally helped with this project!

We did two coats and then let it dry overnight so it would be ready the next day for Mia to use. So far it's working well and I think Mia likes not having to bend over so much to eat. Plus, it prevents her from getting too excited about eating and pushing her bowl all over the room. 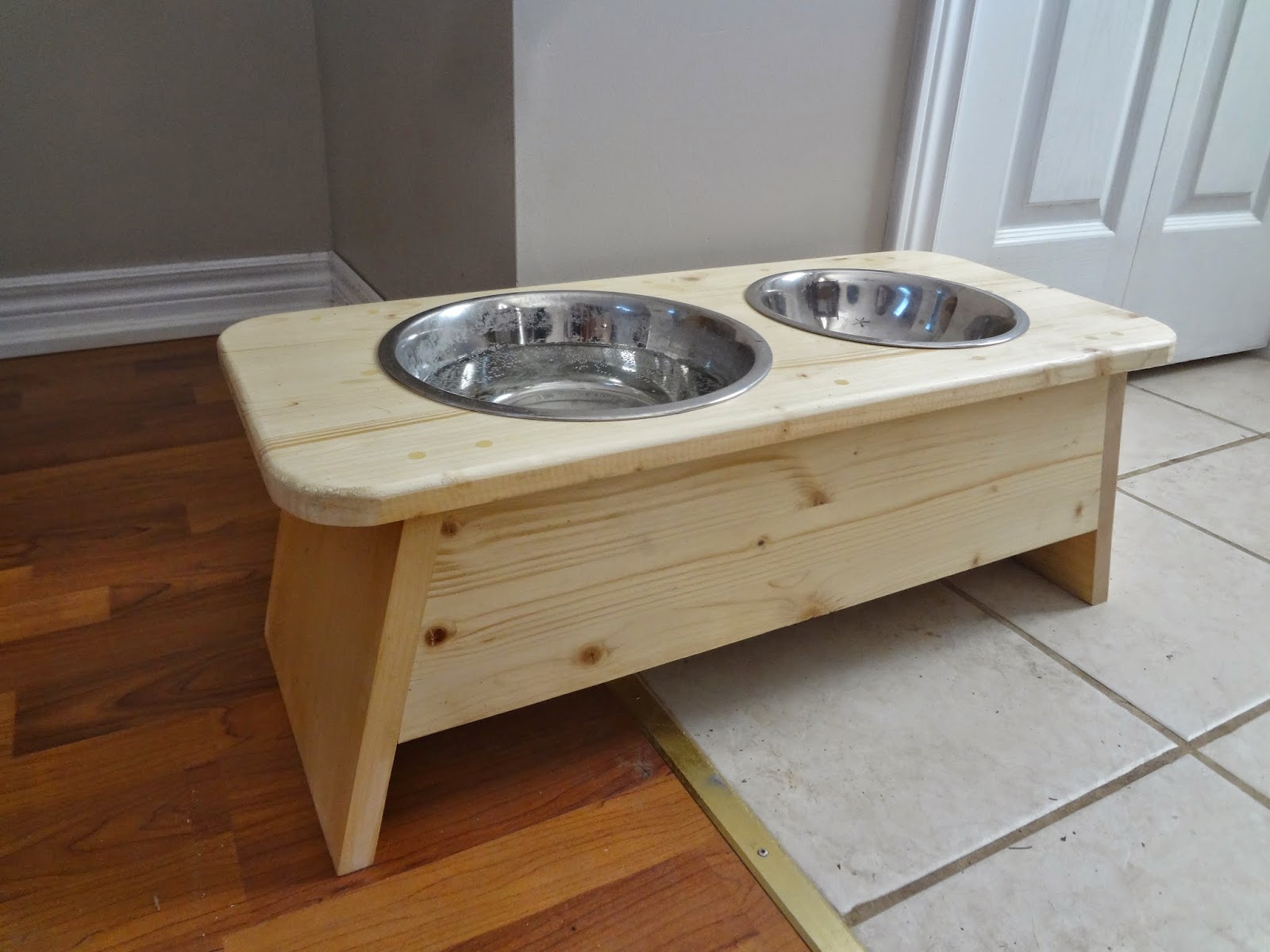 We're pretty pleased with the finished product, even if it's a little big for that space we have it in. We just can't figure out a better place for a it yet so there it will stay for now.

What do you think? Are you impressed with Dan's skill? Have you ever made one before? I'm always impressed with people who can make things out of wood.
Posted by Jenn0021 at Tuesday, April 08, 2014

Email ThisBlogThis!Share to TwitterShare to FacebookShare to Pinterest
Labels: DIY