Peppers To The Freezer!

Despite the fact that we emptied our garden a couple weeks ago, I am still dealing with some peppers from it. We started getting a lot of cold nights and we were getting tired of covering the plants every time it froze, so we opted to just pull everything up. Despite having picked a lot of peppers throughout August and September, there were still quite a few green ones left on the plants. So we picked them, brought them inside and have been letting them ripen on the counter. 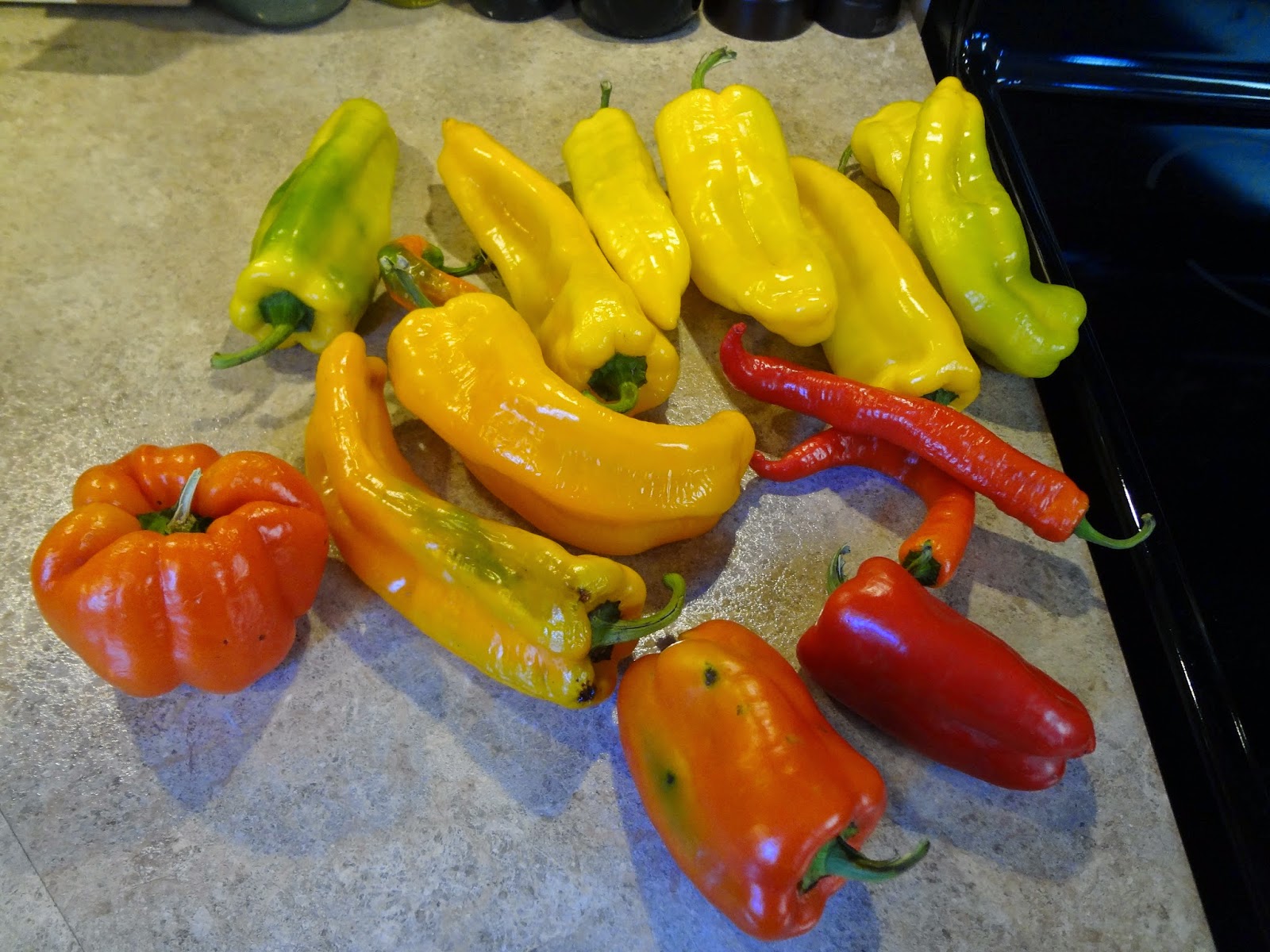 Last week, it was time to actually deal with them.

We love putting peppers into stirfrys and occasionally some other meals, so for us, it's easiest to chop them up and freeze them in small bite size pieces. 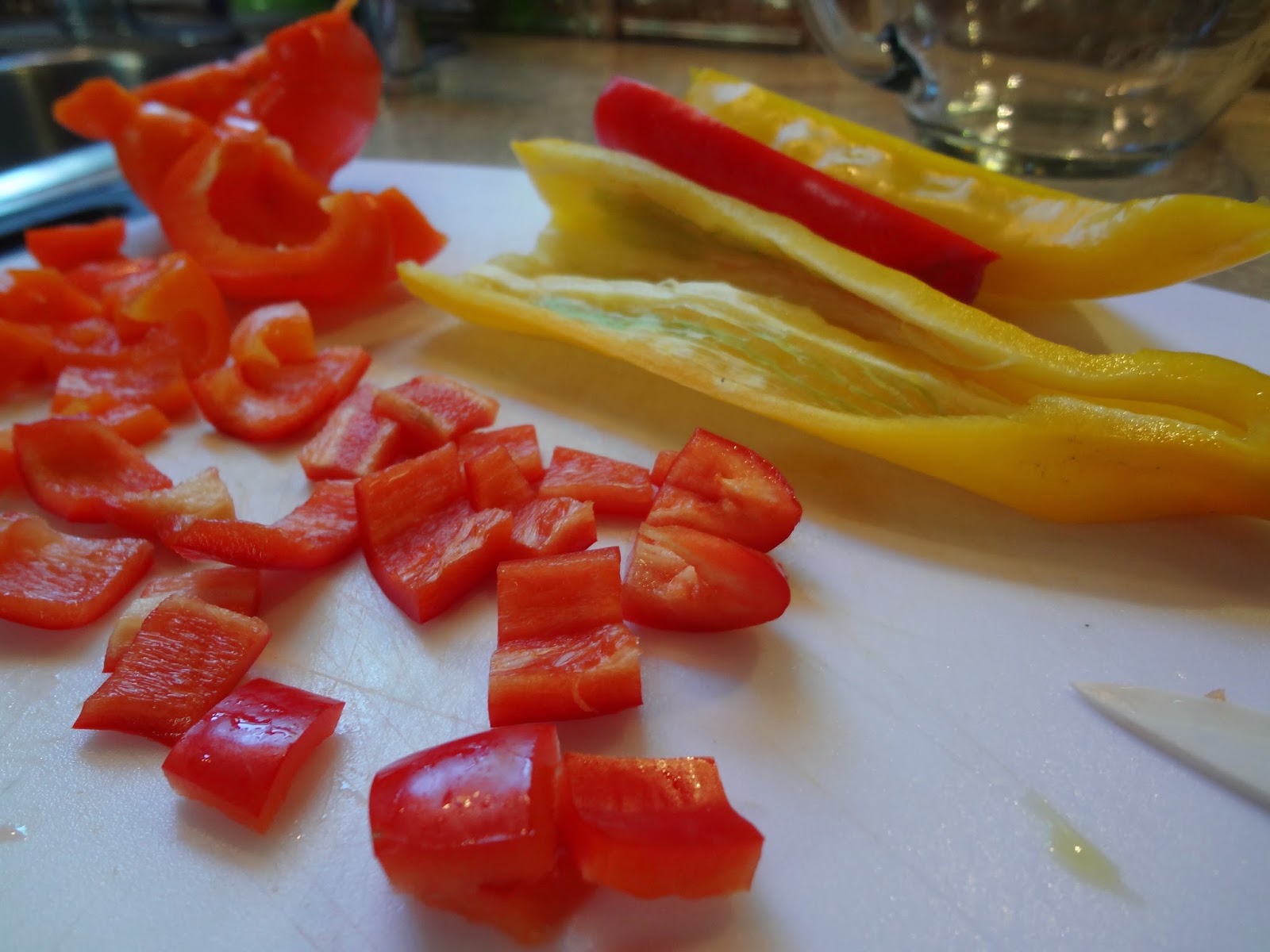 My brother taught me the trick of freezing them in wide mouthed mason jars, to make it easier for getting them out frozen. When we want peppers in a meal, we just pull the jar out of the freezer, grab a spoon and chip out as much as we want from the jar. Easy peasy! 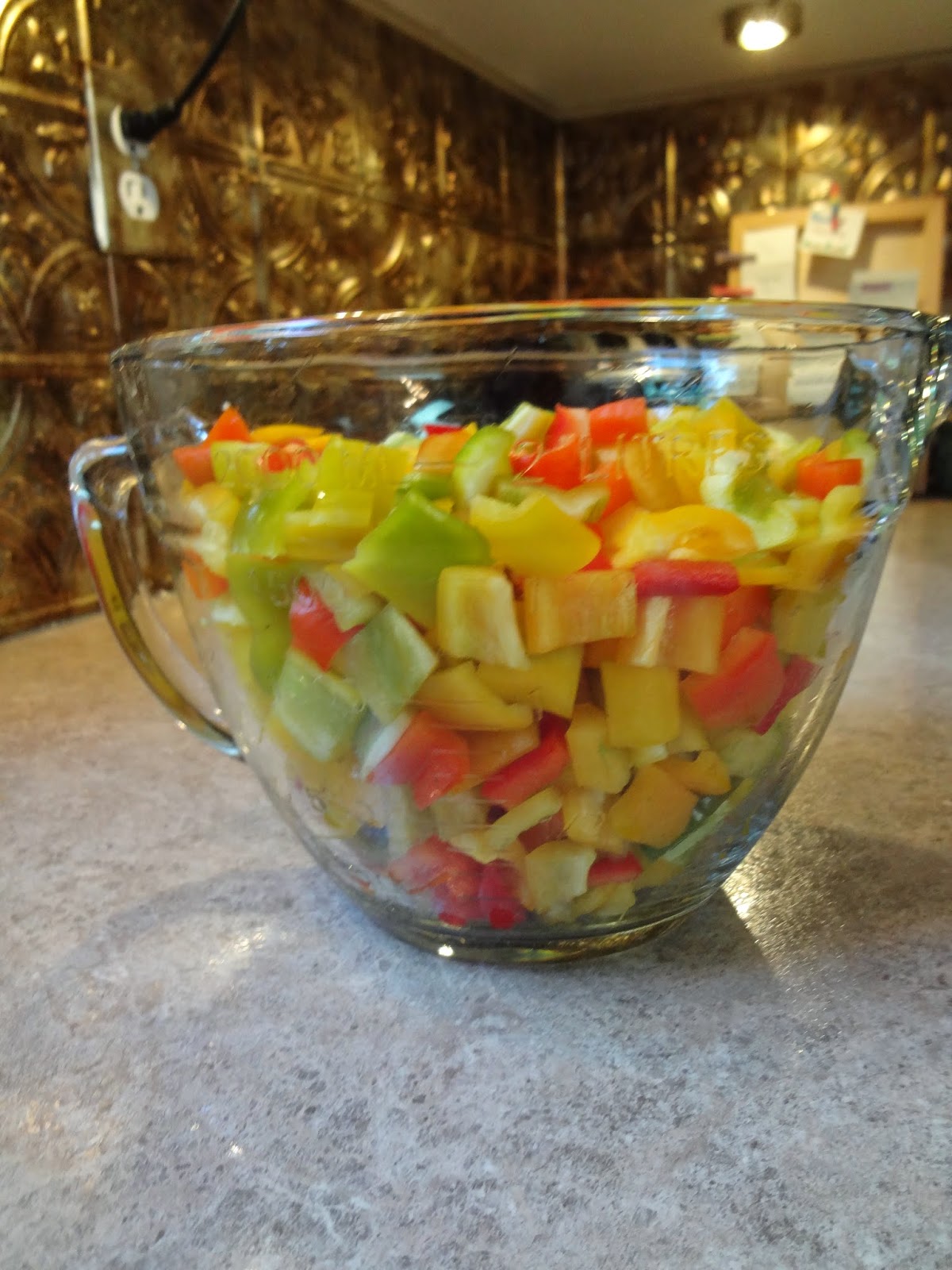 We ran out of peppers last winter so I'm hoping that I did a better job preparing for this winter. I have something like 20 jars (of various sizes) in the freezer by this point. 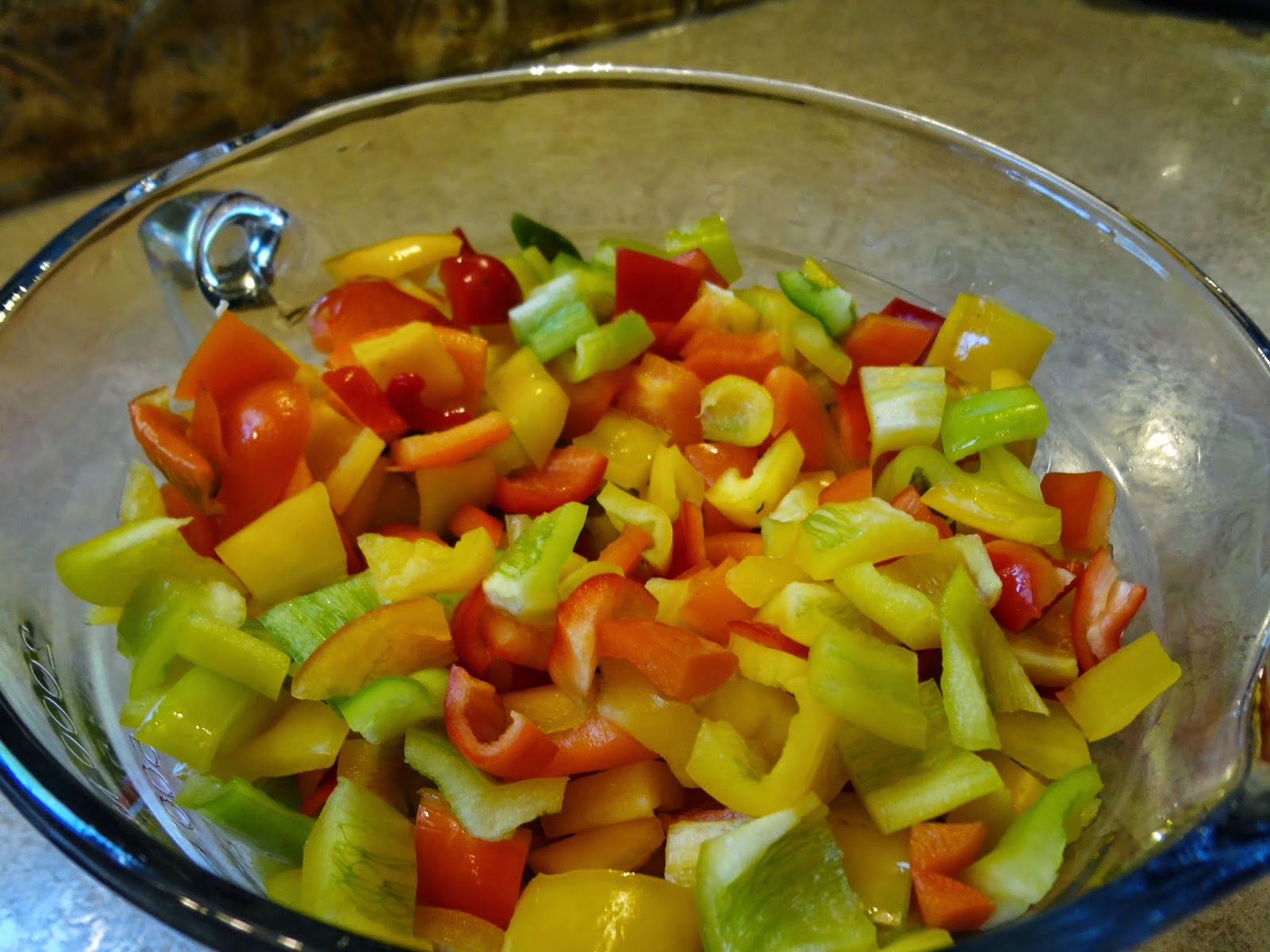 I love how easy it is to freeze peppers since there is no blanching involved. Wash, chop and freeze. And they still taste good after being frozen. They obviously lose their crunch but they still keep their sweetness and add a nice flavour to our stirfrys, alfredos or chilis. 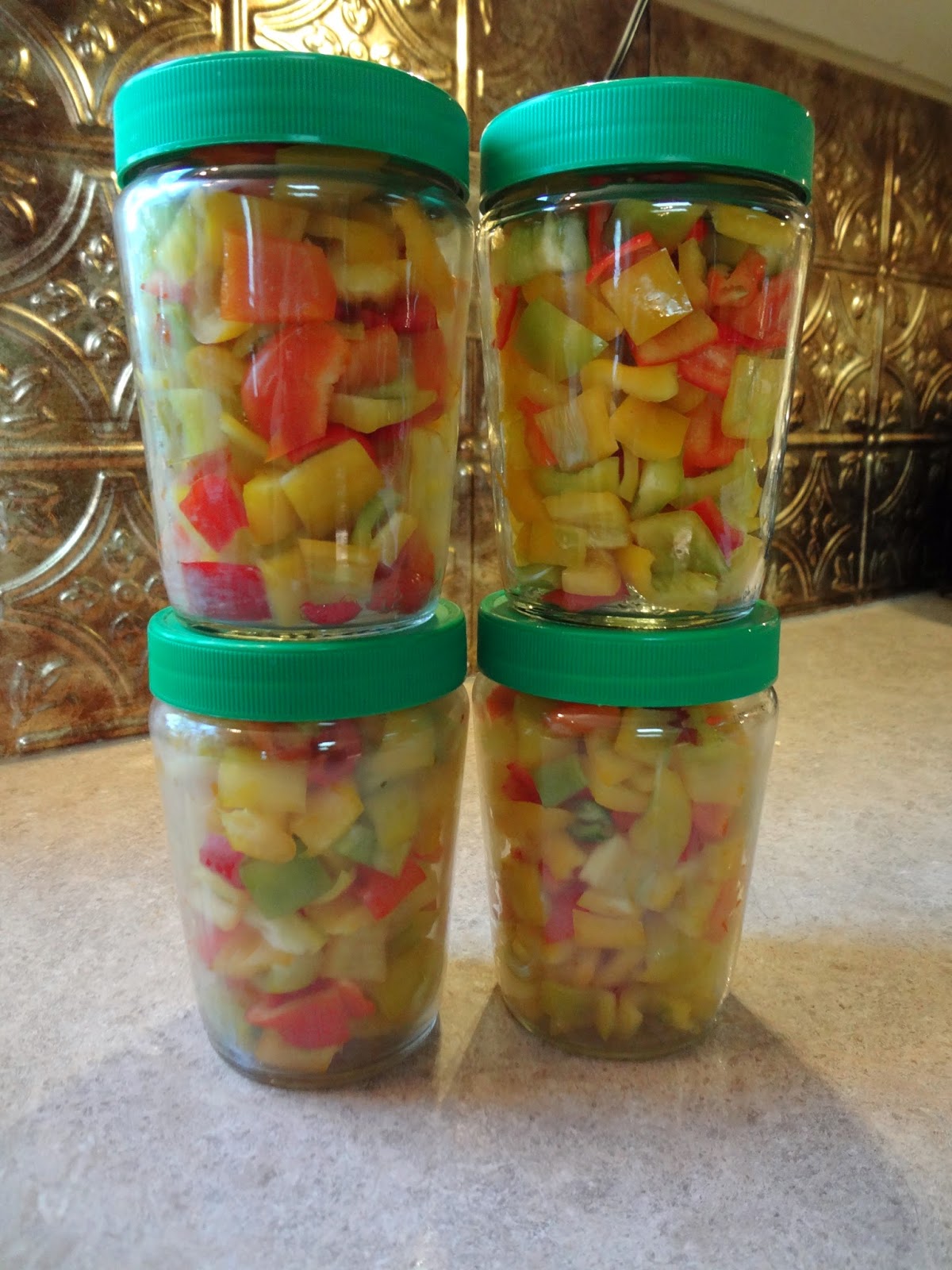 I used old peanut butter jars this time because I had a bunch extra and they work well with their wide mouths. Basically, any sort of jar works.

This tip for freezing peppers doesn't only need to apply to those of us with gardens. You can also freeze peppers you buy from the grocery store. For example, if you buy a bag of peppers and then aren't using them as fast as you had hoped, you can chop them up and freeze them instead of letting them go bad in your fridge. Pretty handy tip, eh?

I hope you all had a good weekend, even if it was the last one in October. Where did the fall go? I'm not ready for winter yet. Anyone else dreading the snow?
Posted by Jenn0021 at Monday, October 27, 2014

Email ThisBlogThis!Share to TwitterShare to FacebookShare to Pinterest
Labels: Freezing