Roman Shade in the the Laundry Room

And yet, the window sat curtainless for over three years. Three years and 4 months to be exact. Despite being on every single to do list I have, I just couldn't motivate myself enough to actually make a curtain. I knew I wanted a roman shade on the window since being able to open the curtain easily to let in light was an absolute must, but I wasn't sure how to go about making a roman shade. So to Pinterest I went! And I found an awesome tutorial which I will send you to if you want to make one of your own, since she describes everything so well and with pictures to boot! Here is the link for the roman shade tutorial. <---- Click for link

I finally put the roman shade making goal on to this years big list of goals that I make each year and I was determined that 2014 would be my lucky year for getting a curtain on that dang window. And guess what? It was! 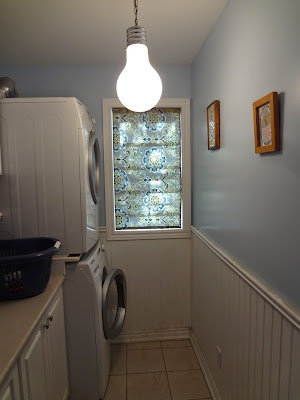 Back in September I asked my sister-in-law Trish if she would come fabric shopping with me, since I knew I needed someone with a bit more knowledge of sewing than myself. She kindly obliged and I came home from that trip with all the supplies I needed to make my shade. 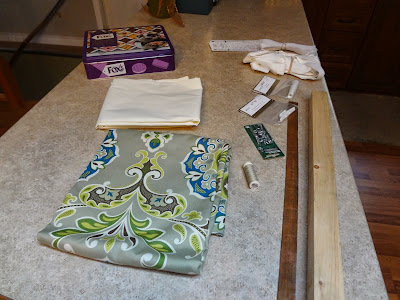 I got fabric, drapery lining, tube tape, velcro, nylon cord, a cord drop, a cleat, dowels, thread and circle screws all for $37.33. I got a bunch of stuff on sale and with discounts so it came out to a very reasonable price if you ask me. Dan had a board in the garage I could use and he made me a "slat" out of a copper pipe that he flattened. So overall, this curtain project cost me less than $40! 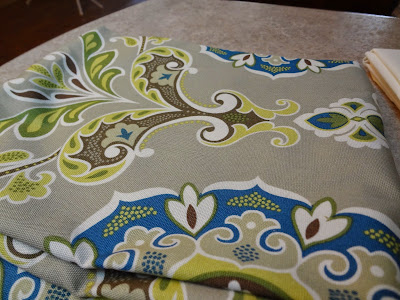 And I'm totally in love with my fabric. Aren't you?

Once I actually got to work sewing it last week, it came together quickly. The tutorial I was following was easy to understand and I felt like a pro watching it come together. 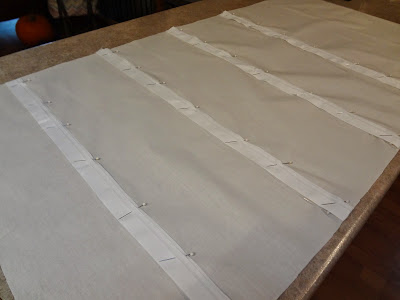 I did have a few hiccups while sewing though. I seem to have trouble sewing in a straight line without picking up extra fabric underneath. 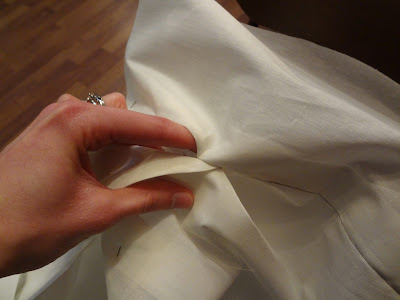 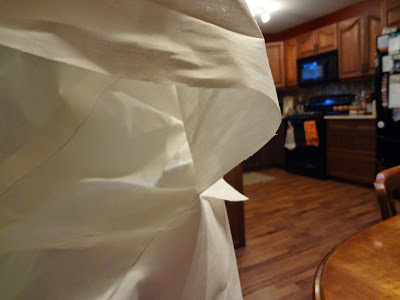 Twice I had to take out stitching and sew my line again. You'd think I would have learned after the first mess up. Oops.

Really though, most of the sewing is just straight lines so it's pretty easy to complete, especially for a beginner seamstress like myself. If you can even put the two words 'seamstress' and 'myself' in the same sentence. 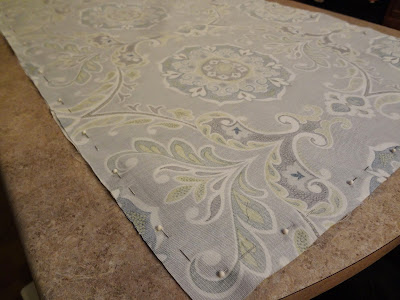 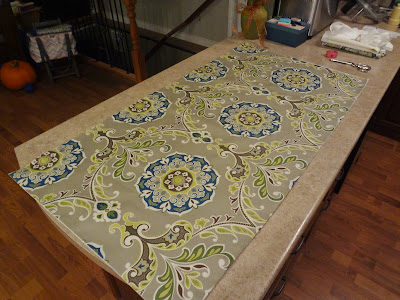 The copper slat for weight in the bottom of the curtain worked fabulously. Good thing I have such a smart husband to come up with something like that. 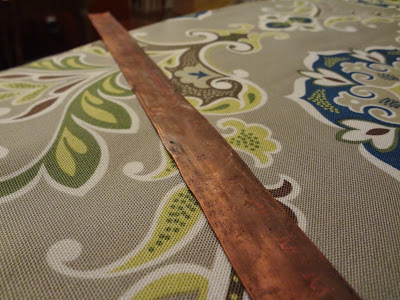 It was at this point of the project that I started to get concerned. I needed to staple gun the fabric to the board at the top and then drill holes into it. I wasn't sure where to find the tools for this and to be honest, I'm secretly scared of power tools. But I was on a roll and wanted to get the curtain done that night, so I called Dan to ask him where the staple gun and drill were. One was in the garage, the other in the work truck with him. I found the staple gun and went as far as I could with the rest of the assembling while waiting for him to return home with the drill. 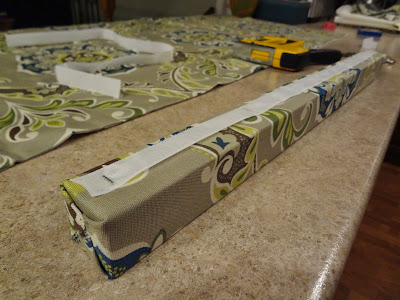 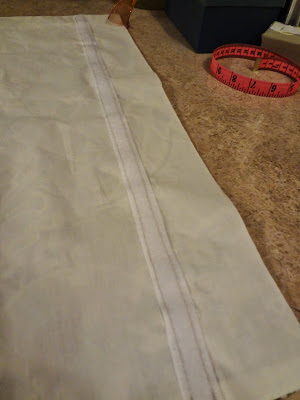 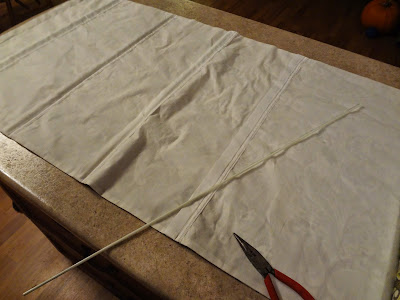 I also admit that Dan totally set the drill up for me too so all I had to do was drill the teensy tiny holes for the circle screws. But I still did that part by myself so it must count for something. 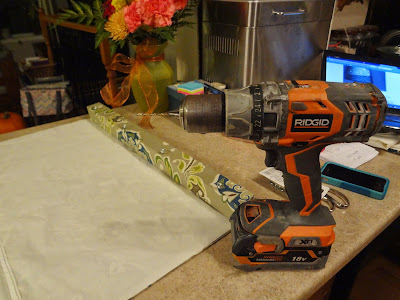 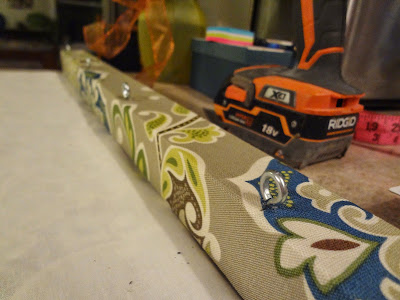 Once the circle screws were in, I could string through all the nylon cord and then it was done! Hooray! 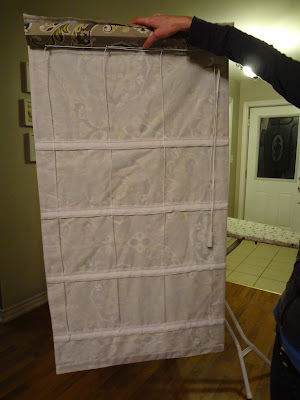 Dan helped me hang it in the window, since I didn't want to try that alone. But other than that, I totally did this entire sewing project by myself! I'm so proud.

Once it was hung, I danced around the house all giddy like for a few minutes and then just kept returning to smile at my new shade. 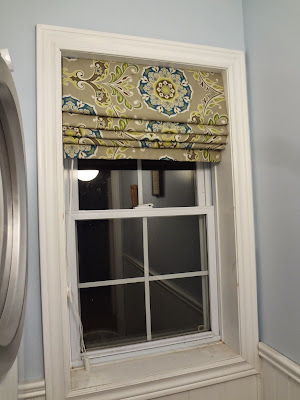 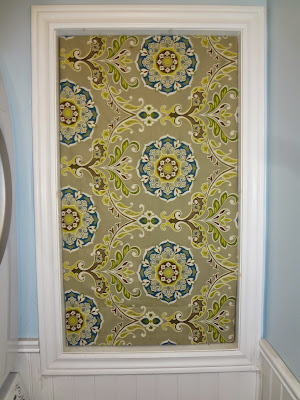 I have learned from my sewing experience. For one, always centre your material! I'm sad that I didn't move the fabric over one way or the other to make it seem a little less "off", but there isn't much I can do about it now. It still looks decent and I'm still proud of my work. But I think that if I made another one of these curtains, I would do a better job. Practice makes perfect, right? 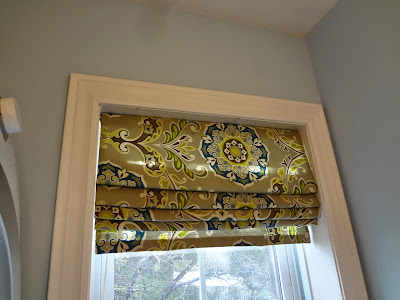 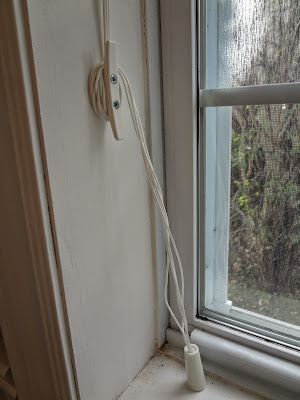 On a whole, I'm delighted with my new curtain and I'm excited that our neighbours can't spy on us anymore.

Has anyone else been sewing anything lately? Or ever made a roman shade?
Posted by Jenn0021 at Wednesday, November 12, 2014