As most of you know, we have a small chicken coop out in the backyard that houses a variety of hens and two roosters. Back in the fall, we purchased some new hens and happily named them all while introducing them to the rest of the flock. There was one white chicken out of the batch and we lovingly named her Matilda The Second, since our first white chicken was just plain old Matilda. She quickly grew and started faithfully laying us eggs. Considering that we only really have three hens that are laying right now, we appreciated Matilda The Second's egg supply.

A week ago, Dan went out to the coop to feed the hens and collect the eggs and when he returned, he had bad news. Matilda The Second had a significant amount of red blood on her backside. I immediately assumed she was dying and there was nothing we could do to save her. But since we really rather keep our hens alive and we had the possibility of saving her, I figured it wouldn't hurt to call my mom and hit up Google. Most of our chickens just die with no warning, so we felt we had a responsibility to try and heal Matilda The Second.

After perusing the internet, I came to the conclusion that she was suffering from a vent prolapse and the treatment for it wasn't that complicated. I won't go into detail about what a vent prolapse is because it's a little gross but if you want to read the blog post where I found my info to help her, click here.

First step was to clean her up, so we brought her inside and gave her a bath. We could tell that she wasn't feeling well and was gladly accepting our help because she didn't fuss at all during the whole bathing experience. I figured she would fight it and get us soaked, but she sat there calmly. I very bravely dealt with the vent prolapse (I should get some sort of small award for this) and then we dried her off with a nice pink towel. 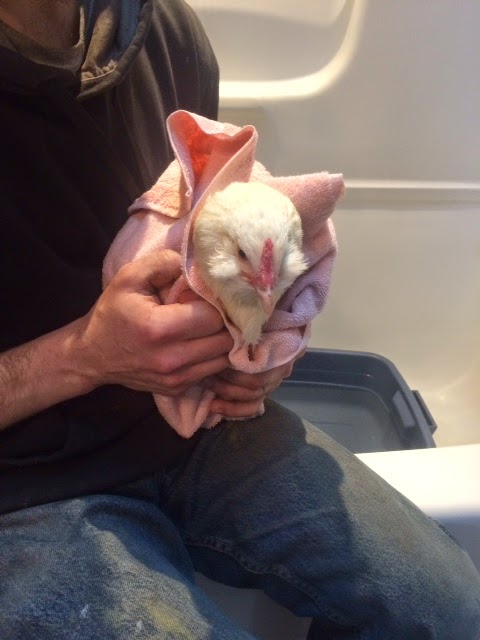 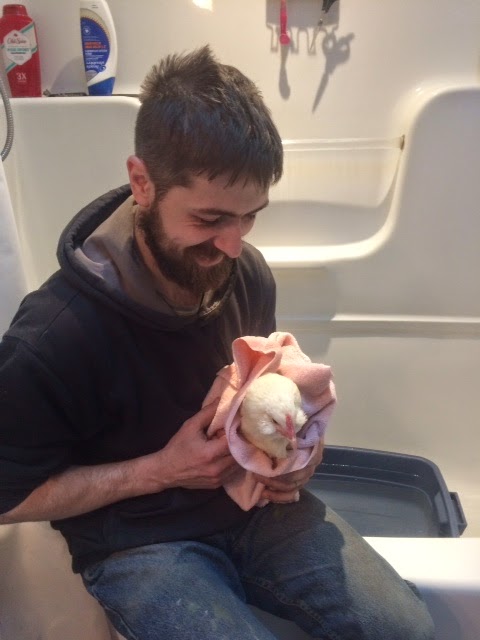 She looked so small and sad in our bathroom.

Once she was dried off, we brought her into the basement and housed her in a nice little cardboard box. We had to keep her separate from the rest of the hens so that they wouldn't pick on her as she was healing and we had to keep her in a dark area with limited food for a week to prevent her from laying. 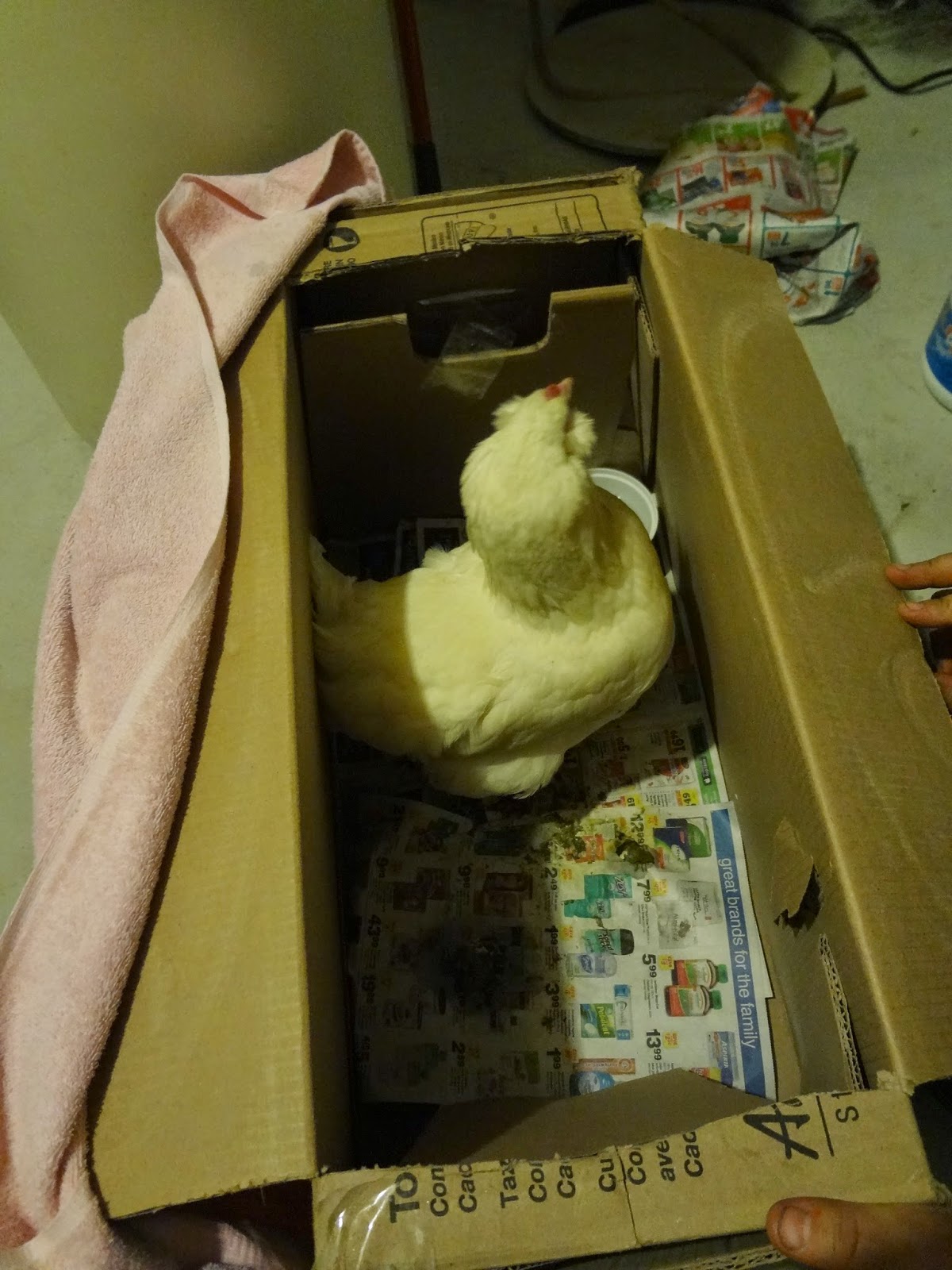 After the first 24 hours of just water, we started giving her limited food, which was mostly a mix of greens and some layer mash or cooked rice. Her vent didn't prolapse again and she was significantly improved within the first day. She was more active and most definitely fought her second bath. 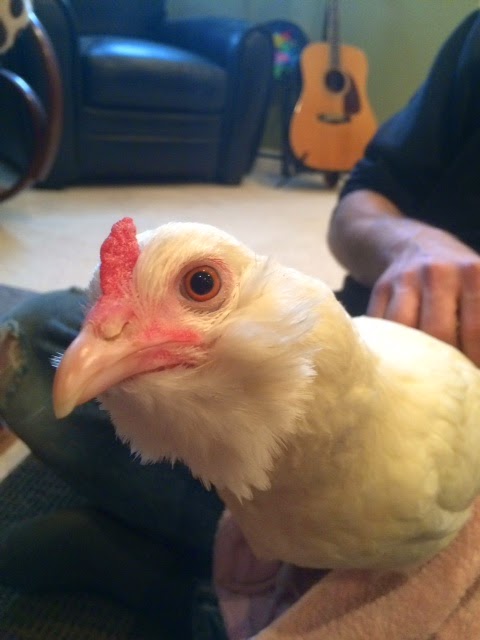 It was kind of fun having a pet chicken for a week and I think she enjoyed it too. She has become very comfortable around us now and doesn't mind being picked up at all. 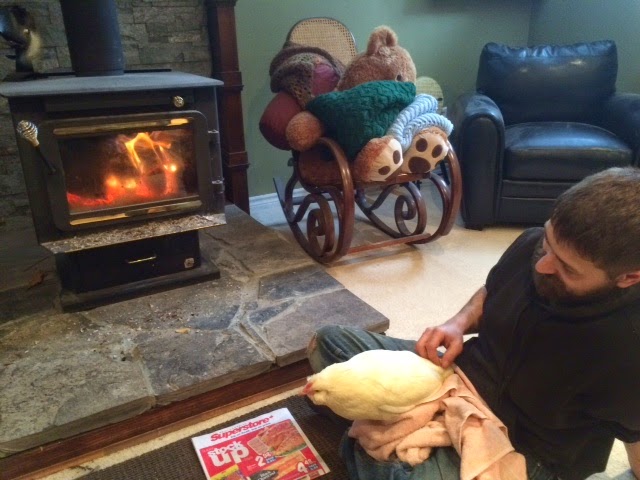 After five days of solitary confinement, we decided that she was healthy enough to head back out to her friends. She has been out there for a few days now and we have been monitoring her carefully, but so far everything still looks good. 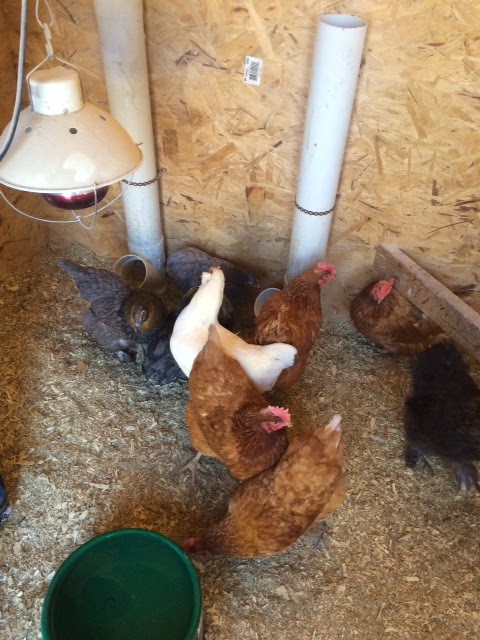 We obviously don't know what the future holds for Matilda The Second but we are feeling pretty good about ourselves for saving her and nursing her back to health. We also now sort of love her best. Maybe we should take turns bringing in a different chicken each week for some bonding time? Okay, maybe not.

Any other chicken owners ever have to nurse any of their flock back to health?
Posted by Jenn0021 at Monday, March 09, 2015