NIAW "You Are Not Alone" - Tory's Story

***April 19-25, 2015 is National Infertility Awareness Week and the theme this year is "You Are Not Alone". I am taking part by sharing stories from women that I personally know who have experienced infertility first hand. Did you know that 1 in 6 couples experience some form of infertility? Someone you know is probably struggling with infertility and you may or may not even know, since it is often a taboo subject. Help break the silence and raise awareness by sharing these posts on social media or with friends and family. For more information about NIAW, please click here. This post is the second in my 2015 NIAW "You Are Not Alone" series. To see more stories, scroll to the bottom of this page for links.***

“How It Feels To Be Infertile Me”

Every year, I ask my freshmen to write an essay based on Zora Neale Hurston’s “How It Feels To Be Colored Me.” The twist, of course, is that they have to choose an adjective to describe themselves, then craft their own essay based on personal anecdotes. In five years of assigning the paper, I’ve never written it myself. Today I am.

“Infertile” is an ugly label. It’s a medical diagnosis that seeps into your psyche, that chips away at your confidence, that begins to drive a wedge between you and those you love. It conjures images of bitter old women, cackling in their rocking chairs, avoiding the sight of newborn babies at all costs. It can break a woman down to her very core, and I’ve yet to find the cure that erases its heartache and shame.

I use the word “shame” intentionally there, for my diagnosis of infertility is very much linked to personal guilt. Back in college, when a child seemed a distant dream but the desire for a date Friday night was overpowering, I began to drastically reduce my caloric intake while increasing my physical output. By the time I was diagnosed as anorexic, my body was covered in a thin layer of “fur,” I couldn’t sleep on my side due to jutting hip bones, and my mom was scared to hug my fragile body too hard. The recovery process was long and arduous, requiring both physical and emotional intervention, but I finally came out the other side. Though anorexia still sometimes snuck up when I least expected to see her, beckoning temptingly as I tried on swimsuits or searched for a bridesmaid’s dress, she had mostly been eradicated.

That is, until June 25, 2012. Jeff and I had been trying to conceive since the previous summer. We’d actually been successful just a few months in (which we later would learn was a near-impossibility by all statistics and diagnoses), but we’d lost little Blueberry at just 7-8 weeks. After a few more months of trying--both on our own and with the help of our OB--a close friend had stepped in and offered to set up a phone consultation for me with a doctor at the fertility clinic where she worked. On that muggy June afternoon, I clutched the phone to my ear as I listened to the RE explain that, after reviewing my medical records and a comprehensive questionnaire, there wasn’t a doubt in his mind that PCOS had been an incorrect previous diagnosis and that the subsequent treatments I’d undergone based on that assumption were not appropriate for me. Rather, I had a condition called hypogonadotropic hypogonadism, likely caused by my own mistreatment of my body in the years I’d battled anorexia.

The tears waited until after I received the list of tests we’d need to undergo, the offer to discuss payment plans with the financial manager, and the assurances that injections and an IUI could likely get me pregnant--though there were no guarantees about carrying to term. I remember placing the phone gently on the dining room table, shuffling to a bench in front of an open window, and watching tears pool on the windowsill as they rushed out of every aching part of me. Hours later, Jeff arrived home to find me in the same position, wracked with guilt, bowed heavily under the weight of my actions and their repercussions. Anorexia was no longer a temptress trying to win the battle for my affections; she now crowed victoriously from the corner, relishing the sight of the label she had tacked above my head: “Infertile.”

In the next year, we would undergo a battery of tests and two more surgeries: one to remove scar tissue and the second to remove another child that my body had failed to nurture into life outside the womb. We would watch our savings deplete as they went into the syringes Jeff had to puncture me with nightly; we would stare at each other in exhaustion after days that began before daylight in order to fit in monitoring before the work day. And even when a third little baby took up residence inside me, we would still flit between despair and hope, never knowing what news the next appointment might bring.

And yet, somehow, in spite of that label of infertility, in spite of our two losses, our doctor gently placed our healthy, tiny baby in our arms on the afternoon of February 8, 2014. I had recovered from anorexia; I had overcome infertility; I had become a mom at last.

Would that it were that simple.

Though offering raspberries on Lily’s round little belly or watching her sturdy legs take her across the playground has forever changed the hold anorexia held over me, she still plays her trump card from time to time. Having Lily didn’t make me not infertile--it merely eased the ache and pain. But it doesn’t assuage my anger when I realize we’ve run out of time and means to give her a sibling. Yes, fertility treatments gave us this little life that we snuggle a bit closer every day, but infertility still took away a future we had dreamed.

My daughter is beautiful, but she doesn’t make infertility any less ugly. 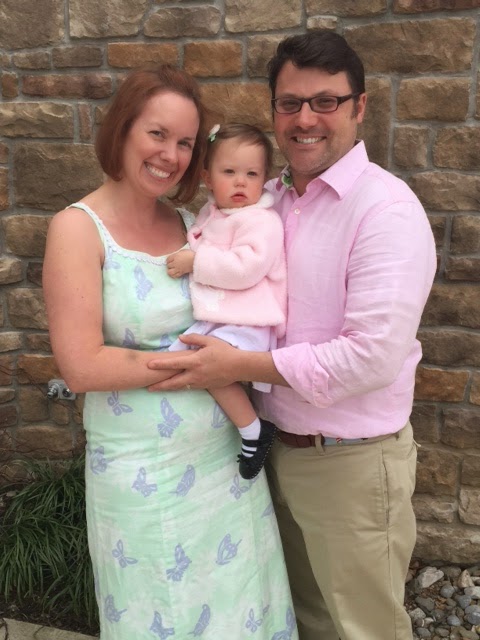 If you would like to read more about my journey, please take a look at my blog, Inch by Inch, Row by Row.