Where The Chickens Sleep

This post is very much belated and for that I apologize. I had every intention of getting this up to you guys as soon as we were done building, but it just didn't happen. Life is crazy busy for us and throwing Christmas in the mix definitely didn't help. You probably didn't even notice though, right? Right? Just nod your head and smile.

Moving on. When we decided to sell our house and buy a new one, we were aware that we may not have been able to bring our chickens with us. Luckily for us, we found this place and there was lots of room for a hen house and run. We did run into a minor problem though... moving the chickens. I was super stressed about how we would get them from point A to point B, considering we had to be out of our house before noon and didn't know when we would get the key for the new place. Plus, there wasn't really any good spot to put them once we got to the new place. Fortunately for me, Dan was not stressed and took everything in stride. And so we packed up our hens in boxes the night before the move (they're easiest to catch when sleeping) and placed those boxes into the moving truck. 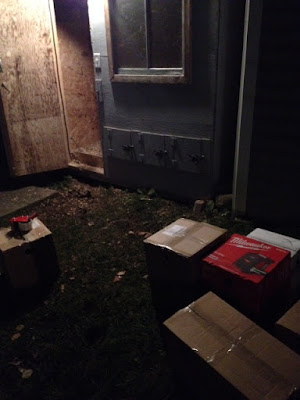 They weren't too pleased with being woken up and confined so, but they got over it. Or more like I didn't care too much, there were more important things to worry about. When we got to the new house, we put them in a sad little dilapidated shed and hoped they would survive long enough for us to build a new coop. 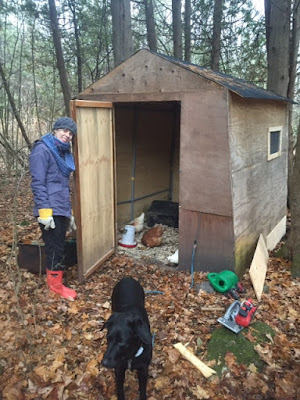 Seriously, this shed sucked. Two of the hens escaped the first morning which made us even more worried, since escaping hens means that there are lots of easy spots for predators to get in. We put up some plywood along the bottom, cut a window into one wall and hoped for the best.

But because of the horrible living arrangements for our precious egg laying hens, we wasted no time in getting a safer structure built. We chose our spot (to the right of the house in the backyard when looking at it from the front) and got to building! 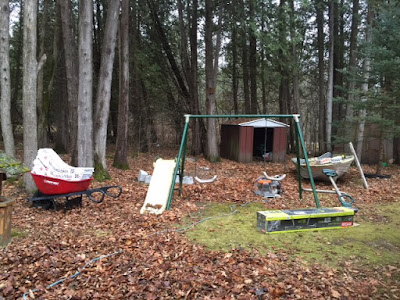 We planned to move the swing set to make working there easier, but it is nicely cemented into the ground and wouldn't budge. So we inconveniently had to work around it. 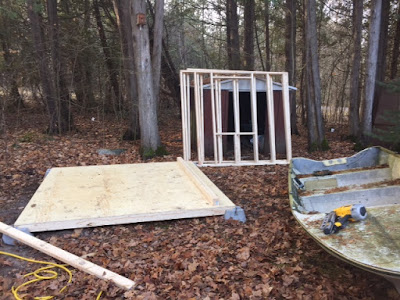 The first day we got the base built and three of the stud walls ready to go up. I thought we had made great progress and assumed we'd be done the next day with plenty of time to spare. FYI, I was wrong. 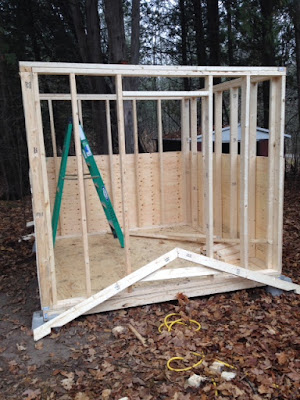 I can't actually remember all that we did on what day, but the point is it took longer than I thought it would to get this little shed up. The frame went up quickly but then we had to build the roof and shingle it and such. A lot of details that I had overlooked in my estimation of time. Good thing I wasn't in charge of this project and Dan was leading us on. 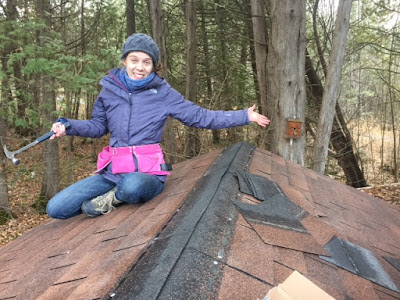 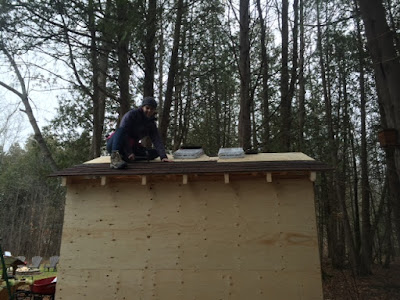 I very proudly shingled most of the roof myself and felt so good about my efforts once I was done. I had never really shingled before so this was a great feat for me. It also felt nice to be so helpful, since Dan could get a lot of other stuff done while I was shingling.

We kind of slacked off with the picture taking while finishing the coop, since we were so busy trying to get it done before the weekend was out. 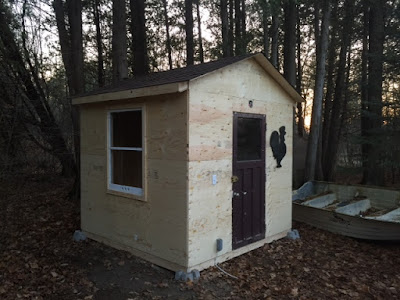 We were super excited to find a big window and a door with a window for super cheap at a restore, they only cost us $38 and saved us lots of time (building a door isn't that easy). Plus, it adds lots of natural light in the coop for our girls. 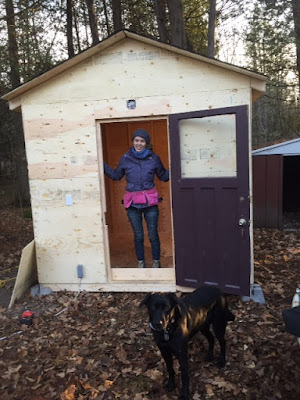 The coop isn't officially done yet, but it's a nice safe place for the hens to sleep without the fear of them being eaten by a racoon. We built some quick roosts for them but still need to build some hen boxes and install their feeders. 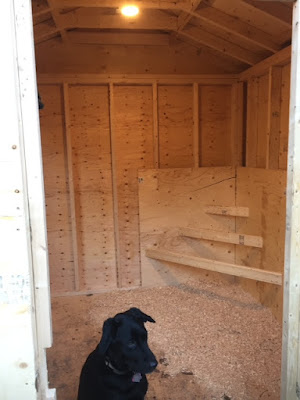 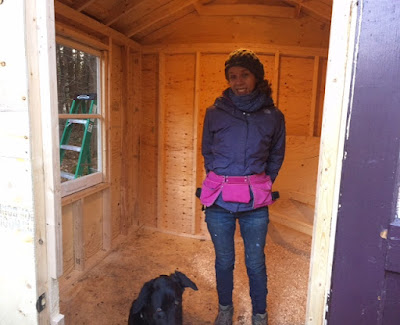 Since the above pictures were taken that first weekend of our building spree, we have added the outside light, vents for air circulation and a small temporary outside run. 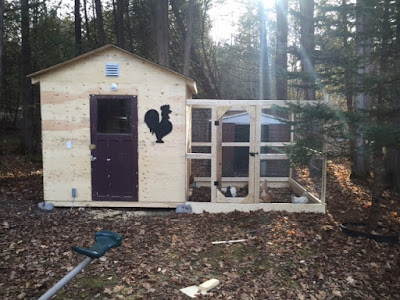 We plan to get hen boxes up sooner rather than later, since laying on the floor isn't going so well and we are now dealing with some egg eaters. But overall, the coop is working well and the hens are happy in it. 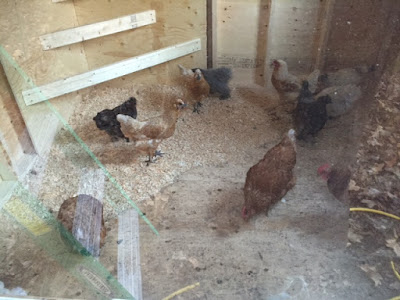 Come spring and warmer weather, we plan to tear down that small tin shed behind the run in the above picture and build a bigger and better run that is more secure (buried wire and wire over the top as well) and fun for the hens to be in. We've got plans!
Posted by Jenn0021 at Monday, January 11, 2016