Update on the House Rehabilitation

Well folks, I didn't think it would get worse, but it did. My house is even messier than it was in my last post. 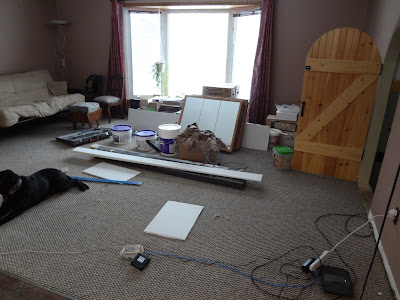 Okay, so maybe I am exaggerating a little bit but it does feel like the mess has now spread itself out. I kind of had it contained to a few rooms before but now it has taken over the living room as well. 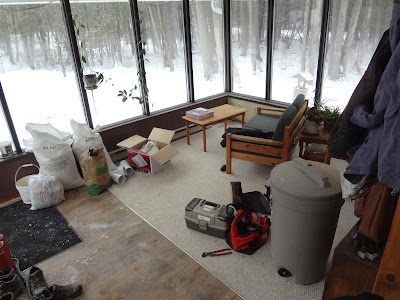 Our bathrooms are still in the mudding and sanding phase, which is the worst job ever. Fortunately for us, a friend/neighbour is giving us a hand with it so we have more free time to work on other projects. 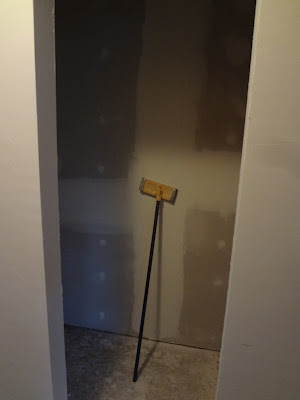 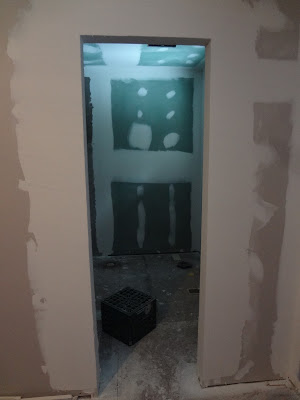 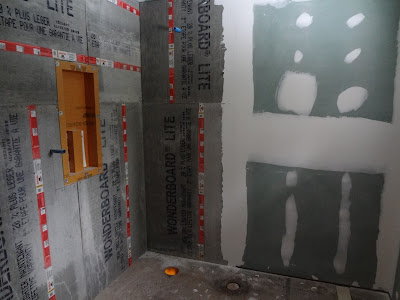 What new projects did we take on? Well if you follow me on Facebook, you'll know the answer to that. We took down the wall separating the kitchen from the living room! 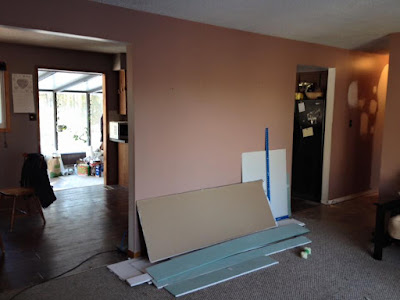 The difference between having the wall and not, night and day! Seriously, best.decision.ever. 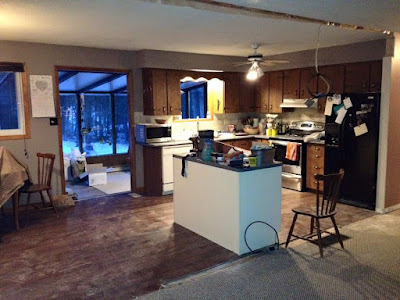 It is so much lighter and open and fabulous. I pretty much smile every time I walk out of our bedroom and see it again. 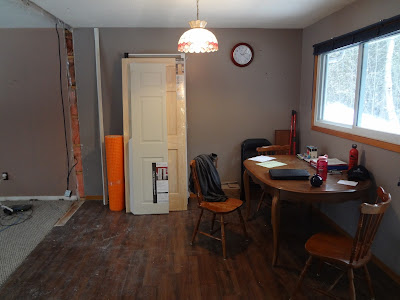 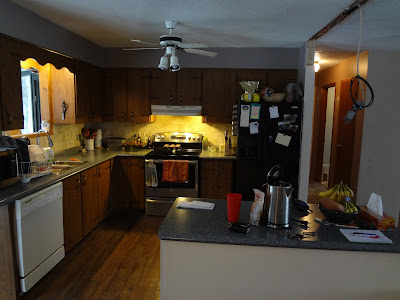 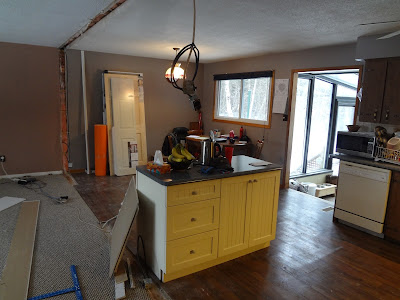 We have plans to update the kitchen too, but all in good time. For now, the wall is gone and there is natural light again.

While we were on the demolition roll, we also decided to remove the closet from that back spare bedroom (the blue room). 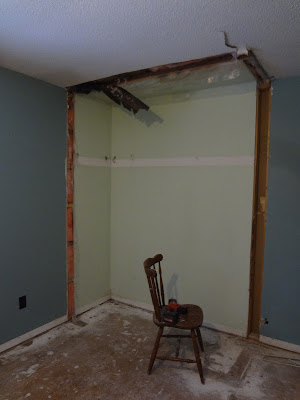 We are rearranging the layout of that room so this awkwardly placed closet (too close to the door) had to go. We put it back in on the other end of the room, along with the new master bedroom closet.

I know this may all be a little confusing for you, but it's hard to explain in a post. At least this post. When I do the final reveals of a room, I'll show more of the process on how we got there. You know, more specific and detailed for each room.

As you can see from the above photos of the spare room, we also took up the carpet. We opted to leave the carpet in the master bedroom (the purple room) for now, since that room was still so full of stuff. See below for proof. 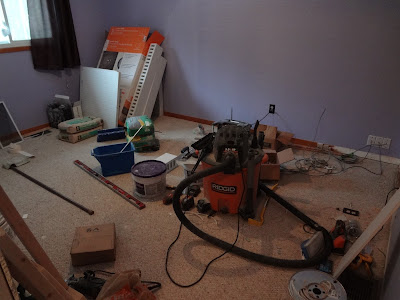 All the floors are a disaster. Our house is now strictly a shoe house. Slippers won't do, shoes are the only option. That or steel toed boots. 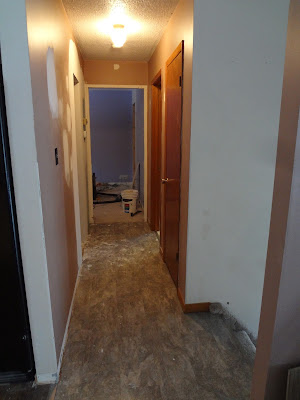 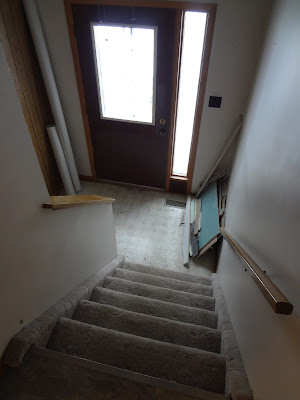 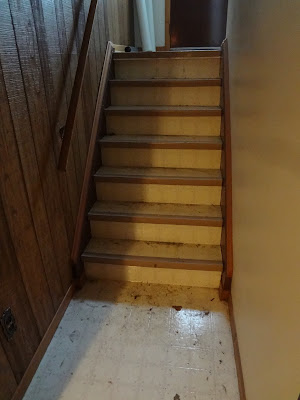 I've also given up on cleaning, there is just no point. The kitchen and our current master bedroom/living space are the only places I really put any effort into. 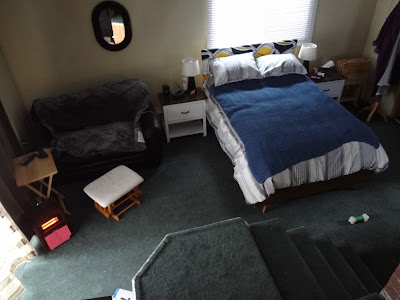 And even those rooms don't get clean floors. Like I said, it's a shoe house now.

The basement is still pretty much the same as it was. Although I did move some boxes down there when clearing out the spare bedroom. 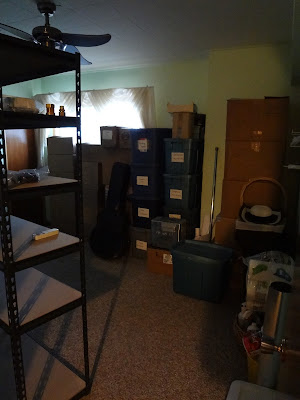 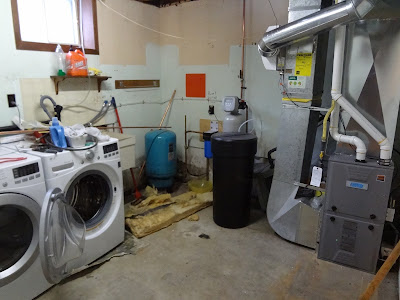 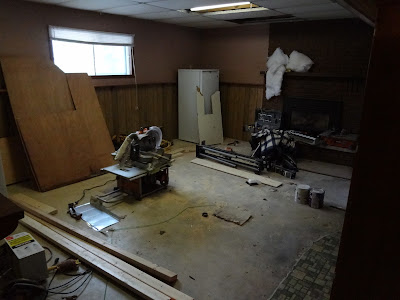 That pretty much sums up what we are living in right now. Like I said, it's a mess and there are so many projects going on at once that it's hard to write specific and precise blog posts. I will try and do better with it though, moving forward.

I'm thinking a food related post might be a good idea soon. I don't want everything to be all about the renovations, although it's hard not to be when that is pretty much all that is going on in our lives. We'll see what happens.
Posted by Jenn0021 at Tuesday, February 09, 2016

Email ThisBlogThis!Share to TwitterShare to FacebookShare to Pinterest
Labels: Renovations