One of my 2017 goals is to go on at least one date per month with Dan. So far we are doing well and we definitely did more than one date in February! I thought I would share a few pictures here and prove that you can still do fun things on the cheap.

Valentine's Day was our first date, where Dan lovingly shopped and made me supper. It was so nice to come home from work and just sit at the island drinking wine by candlelight while Dan cooked me a delicious meal. 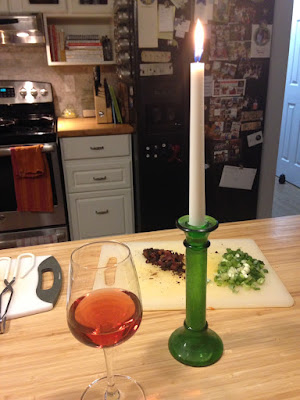 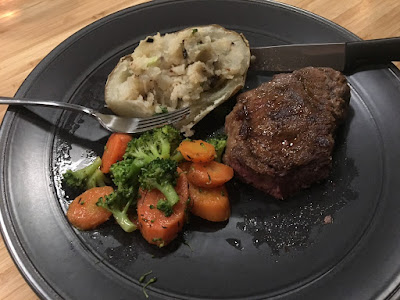 Everything was delicious and there were even leftovers for my lunch the next day! Dan totally won Valentine's Day this year. Even if he didn't cooperate for the picture I made him pose for. 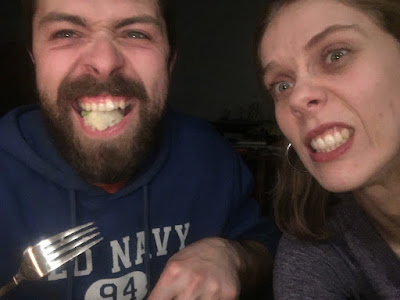 Aren't we pretty? We like to fancy it up on V-day.

Our next date was a hockey game that we had won tickets to, just our local team playing. Neither of us super love hockey but we were excited to get out of the house and do something different. We ended up leaving after the second period though because we unfortunately ended up sitting amidst what felt like 100 elementary aged children (school group) who had all been given homemade noise makers. Super fun. So we snapped this picture (which totally could have been taken anywhere really) and left early for home. We're so old. 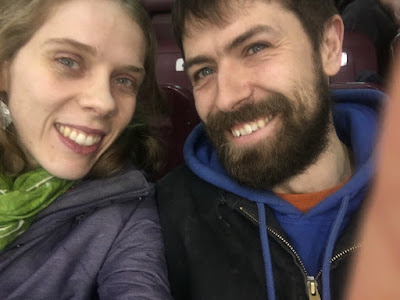 Our final date for February was actually last Saturday when we drove to Toronto for the Outdoor Adventure Show! We walked around for two hours picking up freebies and entering draws before deciding we weren't enjoying the masses of crowds anymore and decided to leave. Dan did purchase a cool backroads program though for a GPS where it shows crown land, boat launches, canoe routes, campsites, etc. He was pretty excited about it.

We forgot to take any pictures while at the actual show (did I mention the crazy crowds?) so we snapped this one in the car to prove we were there. 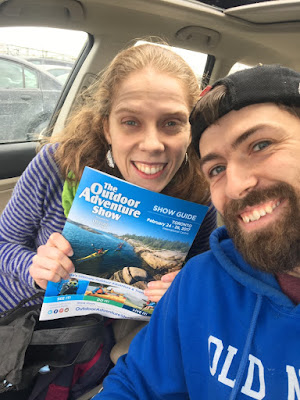 Since it was only midday by this point, we opted to make a few more Toronto stops before heading home. First up, IKEA! I felt super excited about this one because Dan hates IKEA and has never offered to take me. So the fact that he didn't completely shut down the idea when I suggested it made my day. We walked around for a bit and only ended up buying a few small purchases. But I did find a sectional couch I want, if only we had that much money to spend on a couch right now. 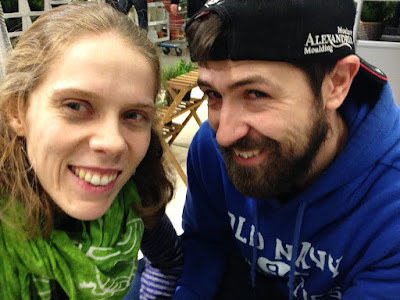 Doesn't the above picture show how happy Dan was to be there?

We then stopped at MEC (Mountain Equipment Hardware) and SAIL on the way home, where we bought important things like chocolate and a GPS (for the above mentioned program). 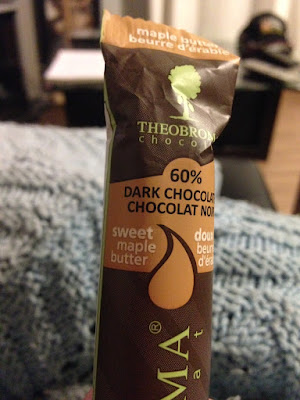 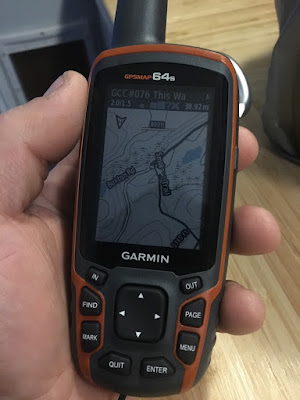 All in all, it was a fun day out and we came home happy and tired.

So there you have it, some fun dates that didn't cost too much and are totally helping us with crossing that 2017 goal off the list. Plus, we super like hanging out together.

P.S. Did you notice how I just squeezed in two blog posts for the month of February? I really have to step up my game if I want to stick to the goal of two blog posts a month. Hopefully I'll do better in March!

P.P.S. And sorry to my readers who have been waiting for part 3 of the kitchen upgrade, I totally forgot! I will try and get the finished pictures up soon. In March at least.

P.P.S. We love selfies! Can you tell? Sorry for the lack of variety in photos for this post, I will try and be more creative in my picture taking moving forward.
Posted by Jenn0021 at Tuesday, February 28, 2017