For My Babies: My Fifth 5K

This post is a little late (3 weeks to be exact) but I wanted to document it on here before too much time passed and I completely forgot. Like what happened with last years run. I did actually run a 5k last summer, it just didn't get blogged about. Oh well.

For the past five years, I have run a 5k each summer. Although maybe I should be more specific and say that I've "participated" in a 5k every summer but only ever actually fully ran one. That's right, the other three were a mix of running and walking. In my defense though, one of those years I was pretty exhausted from 4am wake ups and daily blood draws, since we were in the middle of a fertility treatment cycle. If you want to read more about my previous runs, check out my first 5k, my second 5k or my third 5k. Once again, I slacked on writing about my fourth.

This year I didn't have as much time to train, because the run was scheduled for April 30th and I'm not a winter runner. At all. I'm a good weather runner and even that is hit and miss. But I did start trying to train in February, on half decent days of milder weather and not too icy roads. I also started the Couch to 5k running challenge again, because I'm a sucker for it. This is the seventh time I've started it and have yet to ever finish it. Gosh I suck. Anyways, I ran a total of seven times before running the actual 5k, which is a super low number. Especially since those "runs" were mostly walking with some slow jogging thrown in. But I really wanted to participate in this run, because it was to raise awareness for a cause that I am very passionate about: infertility, pregnancy loss and infant loss. I couldn't just not run in it. 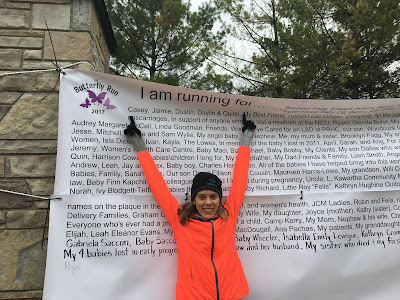 I ran for our five babies that we lost to early miscarriage, Casey, Jaimie, Dustin, Daylin and Quinn and for some amazing reason, I actually had the strength and stamina to run the entire thing. Yup, I slowly jogged an entire 5km with barely any training and I didn't die. 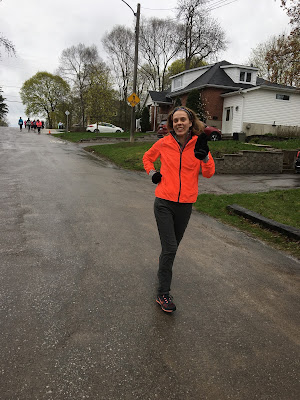 Dan decided he was going to walk the 5k with me but gave himself a head start so that I could catch up with him and then we could walk the rest of the way together. He left 10 minutes before the run was supposed to start, which would have been perfect timing. Except the run started 20 minutes late and I didn't catch up to him until after the kilometre four marker. And by that point, I figured I may as well keep going!

I completed the 4k in 38:47 which was way better than I expected. Heck, I didn't expect to run the whole thing at all. By the time I got to the end, I was completely exhausted and chilled. It was a whopping 4 degrees Celsius and rainy, so the air was damp and cold. 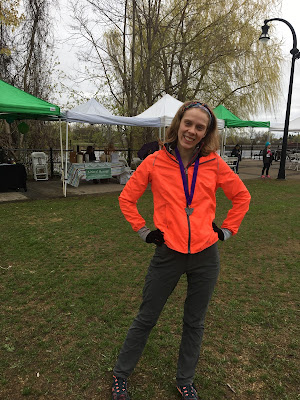 I got a medal for being awesome. Okay, everyone got a medal but I'm super proud of mine. I am so proud of myself for running and like I said, the cause is near and dear to my heart. It was such a powerful event, seeing everyone there for a similar reason. So many people have been touched by loss.

I also had a booth set up for my support group, Dreams of Lullabies. We didn't have many people stop by, but I blame that on the weather. It was wonderful being a part of the event though and maybe someone will hear about our group and get the support they've been looking for. 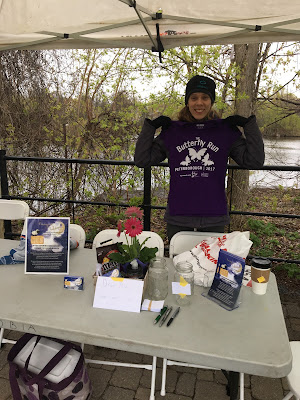 All in all, it was a wonderful day and I'm so glad I participated. And now I get to cross another item off my goal list!
Posted by Jenn0021 at Wednesday, May 24, 2017