I never thought I would be writing another page like this. I honestly never thought we would go through a third loss. I knew it was a possibility, but deep down, I felt so sure that there was no way we would have to go through this pain again. That just wouldn't be fair, right?

And yet here I am, writing another story about another sweet baby that we have lost.

After 18 months of TTA (trying to avoid), we finally felt ready to try again in August 2012. We had gotten pregnant easily the first two times and felt confident that it would happen quickly for us again. Except it didn't. After 11 months of trying, I finally decided it was time to ask the doctor what our next steps were. In July 2013, I was sent for a pelvic ultrasound, an abdominal ultrasound and some basic bloodwork and Dan was sent for a semen analysis. Everything came back normal and it was decided we would be referred to an ob/gyn in town who could do further testing and possibly refer us to a clinic in Toronto. When we were given this referral, the nurse jokingly said that we would probably be pregnant before we met with the ob/gyn. I rolled my eyes and thought, as if.

A few short weeks later, on August 18, 2013,  I was staring at two beautiful pink lines on a pregnancy test. I was shocked and in complete disbelief. I even made Dan come and double check that I wasn't seeing things. We were excited that something had finally worked and started to hope and dream that maybe this time it would work out and this would be our rainbow baby.

I was put on progesterone and baby aspirin, both as a precaution and to hopefully give this baby more of a chance. We went in at 7 weeks and got to see a healthy little baby measuring 6w4d with a healthy heartbeat of 140bpm. And we got an ultrasound picture. 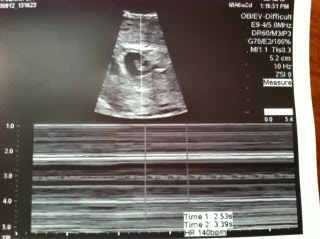 I know you can't see much at this point, but it means so much to me. I never got a picture with any of my other pregnancies and that is one thing I really regret.

We let ourselves get excited, let ourselves feel optimistic, let ourselves actually believe that we would bring a baby home in April. We took weekly bump pictures, bought a pregnancy journal, started discussing names. I know that it may seem early to have been doing all of this, but I was determined to enjoy every day I had of this pregnancy and not have any regrets looking back. And I don't have any regrets. For those 5 weeks, I enjoyed every minute of my pregnancy.

Everything seemed to be going smoothly. I had pregnancy symptoms and no bleeding so I was feeling cautiously optimistic when we went in for our 9 week ultrasound. I knew that this would be the turning point. This is where all our other pregnancies had ended so I knew that if there was a healthy heartbeat, our chances would go up for a successful pregnancy.

But the ultrasound showed that we had lost another baby.

We went in for a D&C the next day, my third one, and got to head down the road of raw emotions once again. It is a familiar road but each time we get sent down it, it sucks all the more.

We named this baby Daylin, which means "beautiful day" because Wednesday was a beautiful day. The sun was shining, the skies were blue and it was warm. The perfect day.